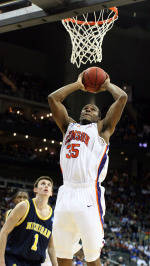 Booker is coming off a strong summer in which he helped Team USA to a bronze medal at the World University Games in Belgrade, Serbia. The preseason Wooden Award candidate is Clemson’s leading returning scorer (15.3 ppg) and rebounder (9.7 rpg). Last season, he was the first player since Tim Duncan to lead the ACC in both rebounds per game and field goal percentage (.571).

“One of the most underrated players in the country, Booker is strong and athletic, and despite being somewhat undersized, he finds a way to get things done around the basket,” Goodman said of Booker.

Booker led the Tigers to a 23-9 overall record last season and a fifth straight year of improvement in terms of the team’s winning percentage. The Tigers also advanced to the NCAA Tournament for the second straight season. Clemson will tipoff the 2009-10 season on Friday, Nov. 13 in a home game against Presbyterian.