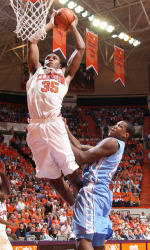 Booker’s 61 points were the most in consecutive games by a Tiger since Edward Scott had 61 in wins over Virginia and Florida State in 2002-03. Booker had 32 points in a loss to Charlotte last Wednesday, then had 29 in a double overtime win against Florida State. He shot 20-26 from the field in the two games combined. His 61 points in back to back games were the most by a Clemson post player since Horace Grant had 62 over consecutive games in 1986-87.

For the season, Booker is second on the team in scoring with a 12.5 average and he is first in rebounding with a 9.1 figure. He ranks second in the ACC in rebounding and is third in blocked shots.