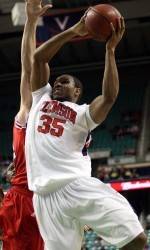 CLEMSON, SC – Former Clemson forward Trevor Booker wrapped up play at the NBA’s Las Vegas Summer League on Saturday afternoon. Booker started all five games and helped the Wizards to a 4-1 record, with their only defeat coming in overtime to the New York Knicks without starters John Wall and Javale McGee.

Booker, who led Clemson to three consecutive NCAA Tournament appearances and was a first-team All-ACC performer as a senior in 2009-10, tied for the team lead in blocked shots (5) and was second on the summer league squad in steals (7). He also averaged 8.2 points and 4.2 rebounds per game. He made 52 percent of his field goal attempts and 69 percent from the free throw stripe.

In the final game in Vegas, the Whitmire, SC native posted highs for the week with 15 points and seven rebounds in the loss to the Knicks. He was 5-for-10 from the floor and 5-for-5 at the charity stripe.

The Wizards’ 2010-11 schedule will be announced by the NBA next month.