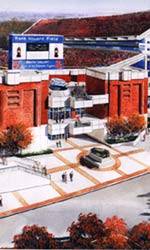 (AP) Clemson, SC – Clemson University took another step toward implementing its planned athletic renovation projects that will upgrade Memorial Stadium and Littlejohn Coliseum and construct a new football building over the next couple of years. State Treasurer Grady Patterson said Tuesday he has issued nearly $21 million in athletic revenue bonds for the projects. The stadium projects include new locker rooms and media areas, a recruiting room, a bridge connecting the north and south sides to include a “Fun Zone,” additional concessions and restrooms and a sports-theme restaurant. Construction has begun on $2.51 million in renovations underneath the stadium’s south stands. An annex and renovations at Littlejohn Coliseum, where the Tigers’ basketball teams play, are expected to run an estimated $14 million. The project may force the men’s and women’s basketball team to find a temporary home for games during construction. And there are also plans for a new indoor track and improvements to varsity athletic practice and training facilities. Patterson said six groups bid Tuesday. First Union National Bank came in lowest at 4.499 percent. The second lowest was 4.529 percent from UBS PaineWebber Inc. Patterson said he thought the bids would come in at about 5 percent. “Half a point is a huge difference, and we would not have gotten that rate without our AAA credit rating and Clemson’s reputation,” he said.