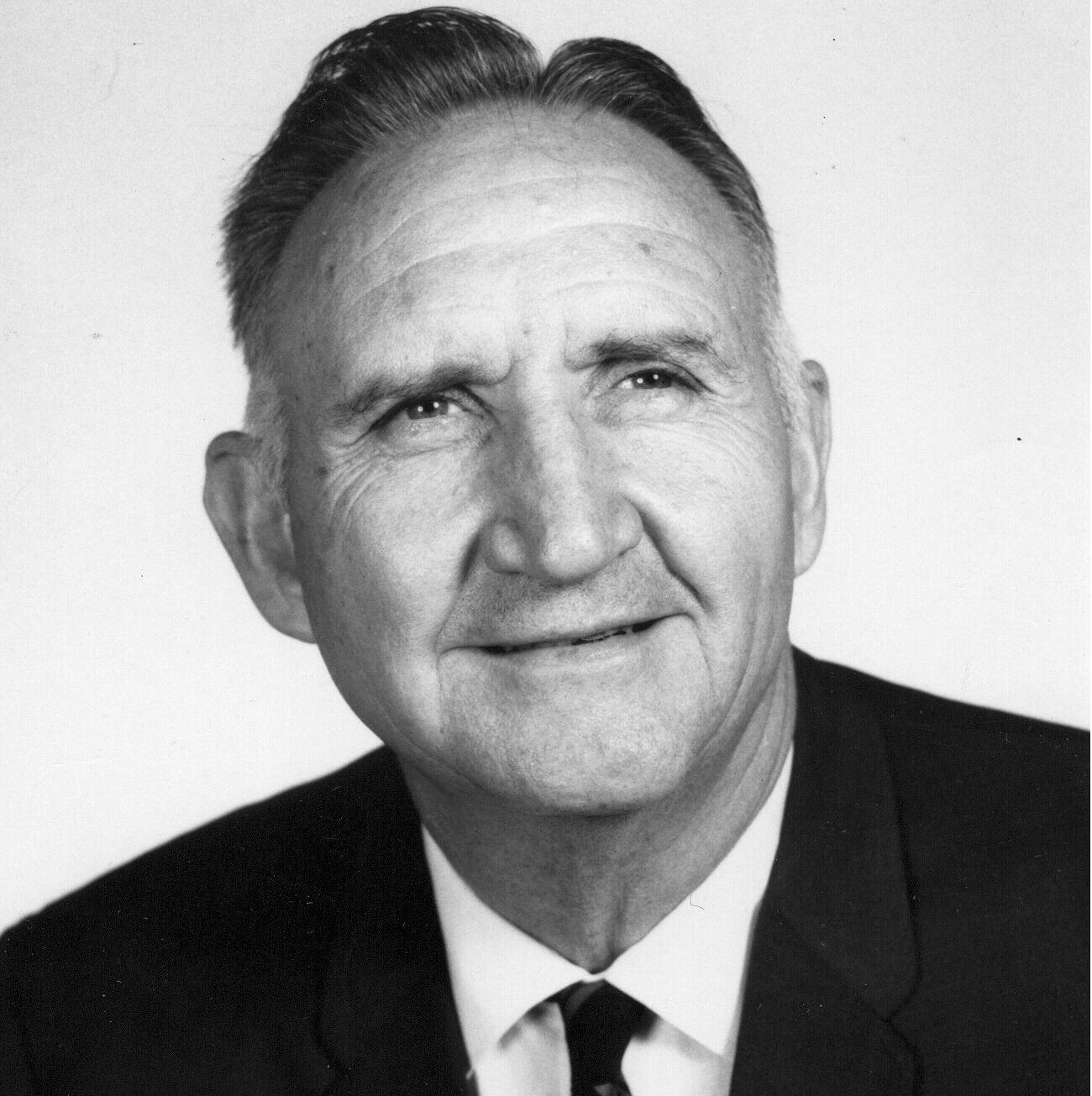 By Sam BlackmanCoach Bob Smith made many contributions to Clemson through his “two careers” at Tigertown.The first career Smith had at Clemson was that of an assistant football coach for 20 years as a member of Frank Howard’s football coaching staff from 1950 until 1969, and as a head baseball coach in 1952-1957. He was hired at Clemson as a t-formation defensive specialist as many teams Clemson was facing were dropping the single wing offense and converting to the modern t-formation.  It was a major change in college football at the time.  He was also instrumental in helping Clemson’s offense adapt to this new offensive formation in college football when the Tigers changed to the T-formation in 1952.  Smith was a four-sport star in college, including all-state in two sports at Furman.  He was the captain of the Furman football and basketball teams his senior year.    He was named “greatest all-around back” in South Carolina in 1934,  the same year he graduated with a BS degree in economics.  After graduation, Furman’s athletic director and head football coach A.P. “Dizzy” McLeod decided to keep Smith on the coaching staff as the head basketball coach and the football backfield coach.   Smith entered Naval service in April 1942, and was connected with the Navy Physical Training program.   He coached teams at Jacksonville, Seattle, and Hawaii.  In 1943, while Smith was on the coaching staff, at Jacksonville Naval Air Station, they defeated Clemson 24-6.   Discharged from the service in November 1945, Smith was given the job of reviving the Furman football program in 1946 after four years of inactivity because of World War II.   He wasn’t given much time and after two losing seasons he was replaced.   Disappointed at his quick release, Smith went into private business manufacturing baseball bats, until the call came from Howard in 1950.After two years with the Clemson football program, Howard, who was also athletic director, made Smith the baseball coach at Clemson.  In 1954, in the inaugural year of the ACC, Smith led the Tigers to the ACC Championship, the school’s first title in any sport.  He also was named ACC Coach-of-the-Year. However, Smith was missing a lot of spring football because of his baseball duties and after the 1957season, Howard hired Bill Wilhelm to replace Smith on the diamond so he could devote his full time to football and recruiting.Clemson went to five post season bowl games and won six Atlantic Coast Conference Championships while Smith was on the Tiger staff. Howard retired after the 1969 season and Smith was named the manager of the athletic facilities as he started his second career at Clemson.  Later he was named an assistant to then Athletic Director Bill McClellan.There was an old piece of bottomland growing up in weeds and trees to the west of the main campus (currently the football practice fields and the track and field facility and the golf driving range facility). McLellan wanted to clean it off for a couple of reasons.  It was an eyesore, and McLellan thought it could be used for at least an intramural field.   He turned that stretch of bottomland over to Smith.  This area included the Jervey Meadows as well. This unsightly land turned into an usable area that is the site of the football practice fields, the soccer practice fields the golf driving range and the track and field complex.   The indoor track and field building was constructed in 2008 and the indoor football field was built in 2012. The Larry Penley Golf Building was built in 2011. Clemson athletes can be seen using these facilities in this piece of bottom land almost daily including the summer as they prepare for fall competition.  The area around the old Seneca River that surrounds the practice field was landscaped and made usable by Smith and many fans with campers use this area during the football season, adding to their tailgate experience.What he did after he left the coaching segment of his career is best illustrated by an old piece of overgrown bottom land which used to be nothing, but is now modern practice and competition sites for many Clemson teams.   Although many facilities have been added and improved in this area, it all started with Smith.   Smith’s vision has been a vital part of Clemson athletics for many years and it will be in the future. More plans are on the drawing board where Smith developed this overgrown piece of land.  “He was a master planner in anything he undertook,” recalls former Clemson Athletic Director McLellan in an 1978 interview.  “He also was no clock watcher.  He’d stay after 6:00 p.m. and work on Saturdays and think nothing of it, if that’s what it took to complete a project.  He contributed so much at a time in his life that he would have been excused if he had taken it easy.”   Smith was named an honorary alumnus of Clemson.   He was a member of Tiger Brotherhood and IPTAY.   He is a member of both the Clemson and Furman Athletic Hall of Fames.  The Cartersville, GA native was married to the former Catherine Jordan of Dillon, SC.   His wife also was the first female Mayor of Clemson for two terms as she was elected first in 1975.  She was also the executive director of the Clemson Chamber of Commerce.  Like her husband she was concerned about the beautification of Clemson and the surrounding area.A plaza dedicated in her honor is located at the intersection of College and Edgewood avenues, downtown Clemson, just below Fort Hill Presbyterian Church.  It has two fountains, benches, walkways and a large tree-planted area.Coach Smith passed away on September 5, 1994.  Although his name is not attached to any facility in the athletic department, the effect and creativity of Smith is there, and will be used for student-athletes, students, and alumni for many years to come.