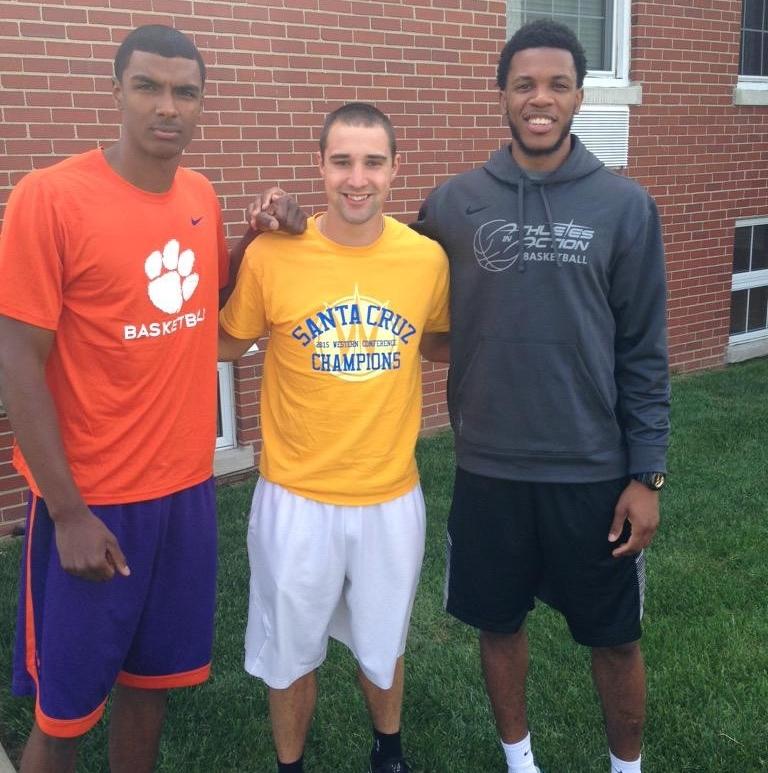 With two departed seniors, coach Brad Brownell will be looking to a new cast of players to step up as leaders in 2015-16. Two such players are also a couple of the top talents on the team, Jaron Blossomgame and Donte Grantham.

Blossomgame, a rising junior, and Grantham, a rising sophomore, flew to Xenia, Ohio on Thursday, May 14 for the Athletes in Actions Captains Camp — an experience designed to instill leadership principles in men’s basketball players from DI teams across the country.

The two Tigers weren’t alone. Seventeen players from schools such as Detroit, Fairmont State, Murray State, Northwestern, Rutgers, South Carolina, Texas A&M, Texas A&M-Corpus Christi, Valparaiso and Washington State also had representatives at the camp, which combined classroom instruction with experiential learning exercises. At night, Blossomgame said the players take part in an open gym to work on their skills against some of the best players in the country.

As you can see, below, the event brought out some notable guests.

Captains Camp featured plenty of learning as well. Leadership development is crucial to the process for Athletes in Action, and Blossomgame and Grantham soaked up information over the course of four days — mostly related to characteristics defining great leaders. As you see on the sheets below, JB circled a few items that picqued his attention during the sessions.

Also in the classroom, players were asked to identify their strongest areas and biggest weaknesses as leaders. Blossomgame said they spent a great deal of time discussing conflict management, and how to address it within a team setting. Beyond the classroom, players went through ropes courses and various team building activities, as you can see below.

Each guy on the team has a role. All r important when u are trying to climb the next rung of the ladder #CaptainsCamp pic.twitter.com/eJnPasHyp1

“It was definitely eye-opening. It was hard to take only one thing away from it; so much of it was important. We were taught how to deal with confrontation, without ruining relationships with teammates. The right ways to lead. What kind of leader are you? We had guest speakers, several CEOs as well as Clark Kellogg from CBS. Two of the CEOs were former college basketball players. Aaron Craft and Joe Mazzulla, who played at Ohio State and West Virginia, were there and took an active role in the camp.

“The exercises we did were all teaching-based. For example, we had fun on the high ropes course. But some guys would be scared, and the counselors wanted to see what guys would step up and encourage them. It all shows that you can’t do things by yourself. You can’t win games by yourself; you need others. The best leaders are the ones that make everyone else better. And that’s been one of my biggest challenges, to be honest — getting my teammates involved. Coach (Brad) Brownell has talked to me about that, and I’ve tried bringing guys to the gym this summer to work out. It’s different hearing it from someone outside of the program, though. It makes you think.”

What was the most beneficial activity you took part in?

“On one activity I teamed with Sindarius Thornwell (of South Carolina). They put a bunch of balls in a circle. One guy is blindfolded, and the other tells you where the balls are. You had to be specific with your instructions, rather than being too broad.”

How can you apply what you learned to the makeup of the team here at Clemson?

“One of the things we talked about was the difference between a captain and a leader. Sometimes, captains are assigned by coaches, but they aren’t leaders. It’s hard for guys that aren’t captains to step up and lead, because you have upperclassmen ahead of you, and things like that. Realistically, the leaders are the ones that are consistent in their effort, the ones that are coachable.”

How do you address the areas you wanted to become a stronger leader in?

“At the end of the camp, we developed an action plan. It focused on the ways we could all become better leaders. I need to continue to lead by example, and to be a positive voice in the locker room. I told the group that my most difficult thing was being able to speak to the guys, especially last year. I have three seniors ahead of me. We were each assigned a captain to stay in contact with, someone that we can speak with when we have questions or issues that come up.”

If you could advise someone on attending Captains Camp, what would you say?

“Do it, for sure. A lot of it was eye-opening, and it gave us so much information. I can only speak for my group. We were tight-knit, especially after we got that first pickup game in. Camp leaders did a good job of explaining everything, and making it fun for everyone. It was a lot of situational stuff; not just classroom notes.”