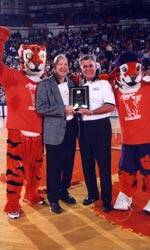 Clemson, SC – Bill Shain, a noted professor in the Clemson University Forestry Department, who served Clemson athletes for nearly 40 years, died Friday, June 29th in Mobile, AL. Shain, who battled cancer for the last three years, was 70 at the time of his passing.

Shain served the Clemson Athletic Department for 38 years, serving as the school’s electric clock operator at home basketball games. His service dated to 1962 when he was hired by the late Bob Bradley, who also died of cancer last October 30th. Shain served Clemson for over 950 men’s and women’s games played in Fike Fieldhouse and Littlejohn Coliseum.

In April, at the Clemson men’s basketball banquet, Shain was honored by Head Coach Larry Shyatt with a special commemorative plaque for his extraordinary service. “What a wonderful man,” said Shyatt. “He was always there, doing his job. A great example, especially the last couple of years when he was battling that difficult illness.” Despite painful and exhausting treatments, Shain missed just a handful of games this past season.

Shain first came to Clemson in 1961 when he began a 35-year career as a professor in the Forestry Department. In 1997, he was presented the Master Teacher Award from Clemson University. After his retirement he continued to work Clemson basketball games, through this past season.

Shain grew up in Louisville, KY where he lived across the street from future Heisman Trophy Winner and Green Bay Packer great Paul Hornung. He attended the University of Georgia on a basketball scholarship in 1950. His freshman coach at Georgia was future college football Hall of Fame coach Shug Jordan.