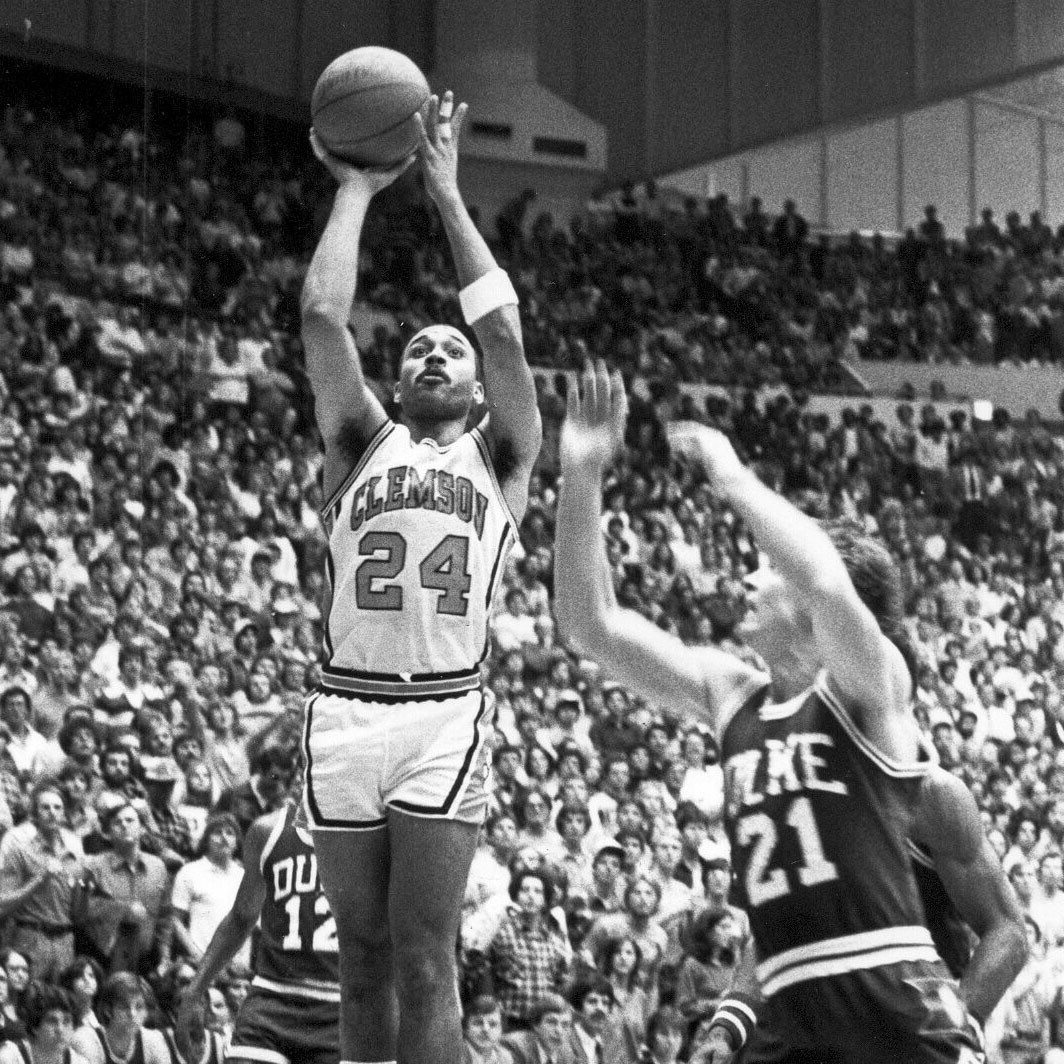 Big Win Before the Largest Crowd

It was the perfect night for an upset.

On January 9, 1980, exactly 35 years ago, one of Clemson’s biggest landmark basketball wins occurred before the largest crowd in Littlejohn Coliseum.

The Clemson students were back in town from their Christmas and holiday break on this Wednesday night.  Number-one Duke was in town and everyone wanted to see the 18th-ranked Tigers tangle with the Blue Devils that night.

The Blue Devils had its share of household names, Gene Banks, Kenny Dennard, Mike Gminski, Bob Bender and Vince Taylor. But so did Clemson as Larry Nance, Horace Wyatt, Moose Campbell, Bobby Conrad, and Billy Williams rounded out the starters for Clemson. These Tigers would eventually make up the team that advanced to the NCAA’s Elite Eight later that season.

They were sitting and standing everywhere; in the aisles, around the concourse that separates the lower bowl and the upper sections of Littlejohn and everywhere else that a person could see the court.  They probably would have sat on the rafters and catwalks above the court and around the ceiling but there were not enough ladders to go up there.

“At that time, if a student had an activity card, we did not turn them away,” said longtime Clemson Athletic Ticket Manager and current Game Management Director, Van Hilderbrand.

“This is not to say we weren’t safety conscious,” said Hilderbrand. “Duke is a high- profile program and we had no classes the next day. I remember the student line going from Littlejohn Coliseum down the hill to the football stadium, up the street going towards Fike Field House, going pass Howard’s rock and all the way to gate one of the football stadium.

“I also recall how orderly the students were that night, and they understood our predicament. With that said, all the fans in general understood that we were going to have a large crowd and it was going to be packed and crowded. We started letting students sit in the aisles, one per step. We were in constant contact with then Athletic Director Bill McLellan and the Fire Marshall and kept them informed of the situation,” said Hilderbrand.

“We did not turn any students away. The decision was made in cooperation with the appropriate officials to let all the students in that wanted to come to the game.  We did not oversell the seats, we simply had more students that night and it seemed as if all the Clemson students wanted to come to the big game—and they did. We didn’t have any complaints from the large crowd that night.  Although we changed our policy on the number of people that were allowed in the coliseum later on, we had a good and a very cooperative crowd, and I think the packed house helped the Tigers that night,” said Hilderbrand.

The record crowd had great expectations for the clash between the top-ranked Blue Devils and the Tigers and the two teams did not disappoint.

In regulation, Duke built its largest lead of the game, a five point advantage, 57-52 with 12:17 left as Taylor made two free throws. However, Clemson went on a 6-0 run and took a 58-57 lead over two minutes later when Nance hit a hook shot.Duke took a 66-62 advantage with 4:54 left when Banks hit a jumper from the baseline.

Clemson’s Campbell made a layup 10 seconds later.Clemson then got the ball back and Gminski fouled Campbell sending him to the line for a 1×1 opportunity. He calmly made both with 4:26 remaining tying the score at 66-66.

After this point there was no more scoring in regulation.   Duke decided to hold the ball for a last shot as there was no shot clock in college basketball in those days.  Duke called a timeout with :13 seconds left to set up the last second shot.   Clemson then called a timeout after Duke took the floor so the Tigers could set up their defense.  What happened in this timeout helped send the game into overtime thanks to longtime Athletic Communications Director Tim Bourret.

“I’m from Hartford, Conn. and during the Christmas break I saw Duke play at Providence,” explained Bourret.  “Duke was in the same situation at that particular time, they needed a bucket at the end of the game and what they did was to let Chip Engelland throw the inbound pass to Gminski and the defense collapsed on him and he would get the ball back to an open Chip Engelland, who was a great shooter.   It worked perfectly for them in the Providence game.

“I was not working for the Clemson radio network that season and I saw Engelland check into the game,” said Bourret.  “I immediately went to the Clemson bench and told Tiger Assistant Coach Dwight Rainey to have someone guard Engelland and stay with him.   He was going to inbound the ball to Gminiski and he would get a quick pass back to Engelland and he would have an open shot.  When Engelland inbounded the ball from midcourt, he threw the ball to Gminiski.

“Gminski threw the ball back to Engelland, but he was being guarded closely by a Tiger defender and he didn’t get the open shot like he wanted and he ended up heaving a desperation attempt that missed and the game went into overtime.  So much of the time whoever inbounds the ball gets forgotten about and is left wide open.   I was glad I could contribute and do my part for Clemson that night.”

In the overtime period, the Tigers gained the upper hand then put on a free throw shooting clinic to gain the victory.

After a Campbell layup and two free throws by Banks of Duke, Clemson got the lead for good when Billy Williams hit a 15-footer.   After a Duke miss, Bobby Conrad hit two free throws to put the Tigers up 72-68.   Duke fought back, pulling to within two on two occasions, but the Tigers free throw shooters were near perfect down the stretch.   Clemson made 15 of 17 free throws in the overtime period.

“We knew we had to hit our free throws down the stretch,” said Bobby Conrad.  “We didn’t do that in an earlier loss to Oregon State when we were in the same position.   Tonight, all of the guys did a great job at the line and we were able to keep the upper hand,” said Conrad after the win.

It was one of many special games for the Tigers that season. Clemson lost to UCLA in the NCAA Tournament’s Elite Eight and this 1979-80 team is consider by many to be one of the best, if not the best in Clemson history.

The “big win before the large crowd” will always be a Clemson classic.