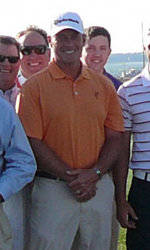 Biershenk Qualifies for US Open

CLEMSON, SC – Former Clemson golfer Tommy Biershenk won the US Open Qualifier at Germantown Golf Club in Memphis, TN on Tuesday and will make his first appearance in the US Open. Biershenk, who was a senior at Clemson in 1996 and was a member of four NCAA Tournament teams, had rounds of 67 and 66 on Tuesday in the 36-hole qualifier.

Biershenk will be joined by three other former Tigers in the 156-player field at The Olympic Club in San Francisco June 14-17. Lucas Glover will be in the field by virtue of his 2009 US Open victory. He has made the cut at the US Open each of the last three years. Jonathan Byrd, who finished in the top 30 on the PGA Tour money list last year and Kyle Stanley, ranked in the top 60 in the world, also will be in the event.

Biershenk finished first among the 84 players competing in Memphis for nine spots. He scored 33 in three of his four nines and played the par four holes in six under par for the two rounds. He had 11 birdies and just two bogeys on the day.