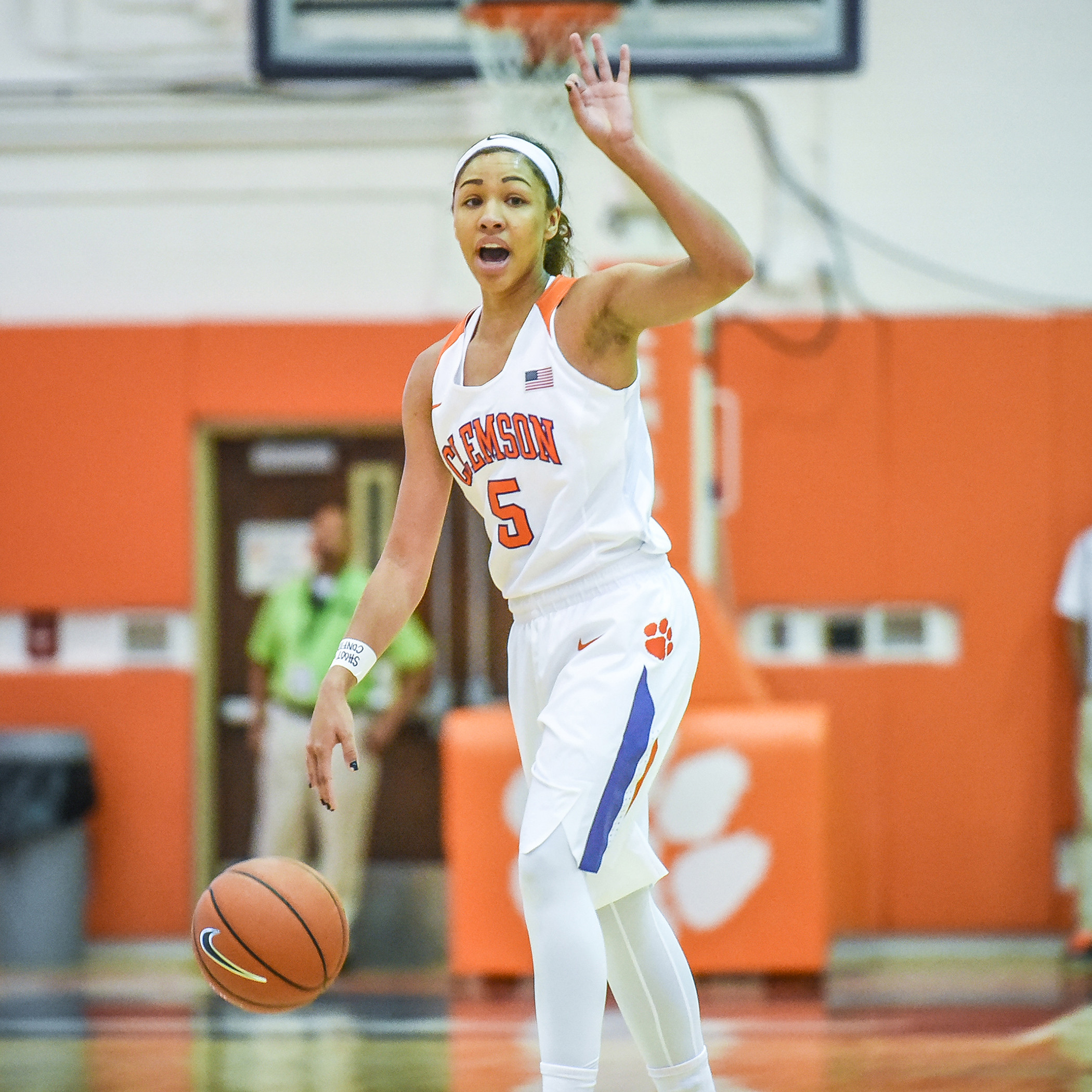 Her father, Darryle, and her mother, Jan, both played basketball at Mount St. Mary’s in the 1980s. Two of her aunts and an uncle also played for the Mountaineers.

Now in 2015, Edwards and her twin brother, Drew, are both following in their parents’ and family’s footsteps of playing college basketball, Danielle at Clemson and Drew at Providence.

“It was bound to happen,” Edwards said with a grin.

Edwards grew up in a basketball family and loved the game from an early age. She credits her two brothers, Drew and her older brother, Darryle, for molding her into the player she is today.

“I would play with them all the time. They would rough me up. That’s probably why I don’t back down when I play, because my brothers used to beat me up all the time on the court.”

The toughness Edwards developed in the backyard with her brothers has translated to her ability to start at the point-guard spot for the Tigers as a freshman. Being the floor general on a team in the first season with a program is a challenge, but one that Edwards is embracing.

“It can be difficult at times because I am a freshman and I’m still trying to learn the ins and outs and how to handle the pressure,” admitted Edwards. “But I’m up for the challenge.”

So far this season, Edwards has proved just that. In her first game in a Clemson uniform against Charleston Southern, the 5’7” guard recorded a 13-point, 11-rebound performance en route to a Tiger win. She followed that up with another double-double in her second college game against Coastal Carolina.

Edwards’ ability to rebound the basketball, especially at her size, has impressed Tiger fans as well as her coaches.

“I can’t ask for anything more for from a freshman point guard,” head coach Audra Smith said following her second straight double-double against the Chanticleers. “She is a fighter and a competitor.”

When asked about her rebounding ability, Edwards simply shrugs her shoulders. She is just playing basketball how she learned to with her brothers in the backyard, where she had to fight and claw for every rebound and loose ball.

“I just see the ball and go for it,” said Edwards. “People tend to underestimate how high I can jump because I am so small, but coach (Daryl) Oliver has me doing rebounding drills in practice every day.”

Along with her rebounding ability, Edwards has shown she can pour in points while also distributing the ball and finding her teammates for open shots. Against Furman on November 21, she tallied a near triple-double with 13 points, 10 rebounds and eight assists. Three days later, Edwards scored 23 points against Oregon on the road. It was the highest point total by a Tiger freshman in the Smith era.

However, what Edwards values even more than performing well on the hardwood is the family atmosphere at Clemson and how it is shaping her entire college experience. She cites the Clemson family as one of the main reasons she chose to play college basketball in the orange and purple.

“The best part of my Clemson experience so far has been the relationships and the family environment that I’ve developed here,” stated Edwards. “I now have 13 sisters. I have a twin brother and an older brother, but I didn’t have any sisters until now.”

Edwards, a Perry Hall, Md., native, said that the family atmosphere at Clemson has made the transition to college much easier.

“The Clemson family means a lot to me,” continued Edwards. “I’m nine hours away from my actual family, so to have a second family here is outstanding to have and I’m very thankful for that.”

For every college athlete, his or her sport is the focal point of their lives, and it takes some time for them to realize they have a platform that is much bigger than the sport they play.

Edwards, who rarely looks like a freshman on the court, is also beyond her years off the court.

“In the long run, I want to do more than just play basketball. I want to give back. I want to affect change.”

The Clemson women’s basketball program did just that on November 18 in its game against No. 2 South Carolina. The home game was designated as a “Pediatric Cancer Awareness” contest, as fans could donate a certain amount of money for each free throw the Tigers made against the Gamecocks.

Clemson came up short on the scoreboard that evening, but it managed to raise $1,080 for cancer research and specifically, Chase For the Cure, an organization that benefits Nueroblastoma research.

The two-year old son, Colt Becker, of Clemson’s director of basketball operations, Kathy Becker, was diagnosed with Nueroblastoma 18 months ago and battled the disease for over a year before recently going into remission.

Smith and the rest of the women’s basketball program wanted to use their platform to raise money for research on this rare form of cancer in honor of Colt and the Beckers.

“I told the players before we came out versus South Carolina that we have to think about the big picture, and at the end of the day, we are family,” said Smith. “The entire Clemson athletic department and the entire Clemson community is family. So for us to have an opportunity to come out and do something special for Colt is big. And that’s what we’re all about.”

Edwards is thankful that she was able to be a part of such an impactful and important game so early in her career. The freshman recorded four points, six rebounds and six assists in the game while playing all but two minutes of the contest. She also was 2-2 from the free-throw line, therefore she personally contributed to the cause.

“I love playing basketball, and for us to be able to use basketball to raise awareness was great,” said Edwards. “I loved being a part of that game.”