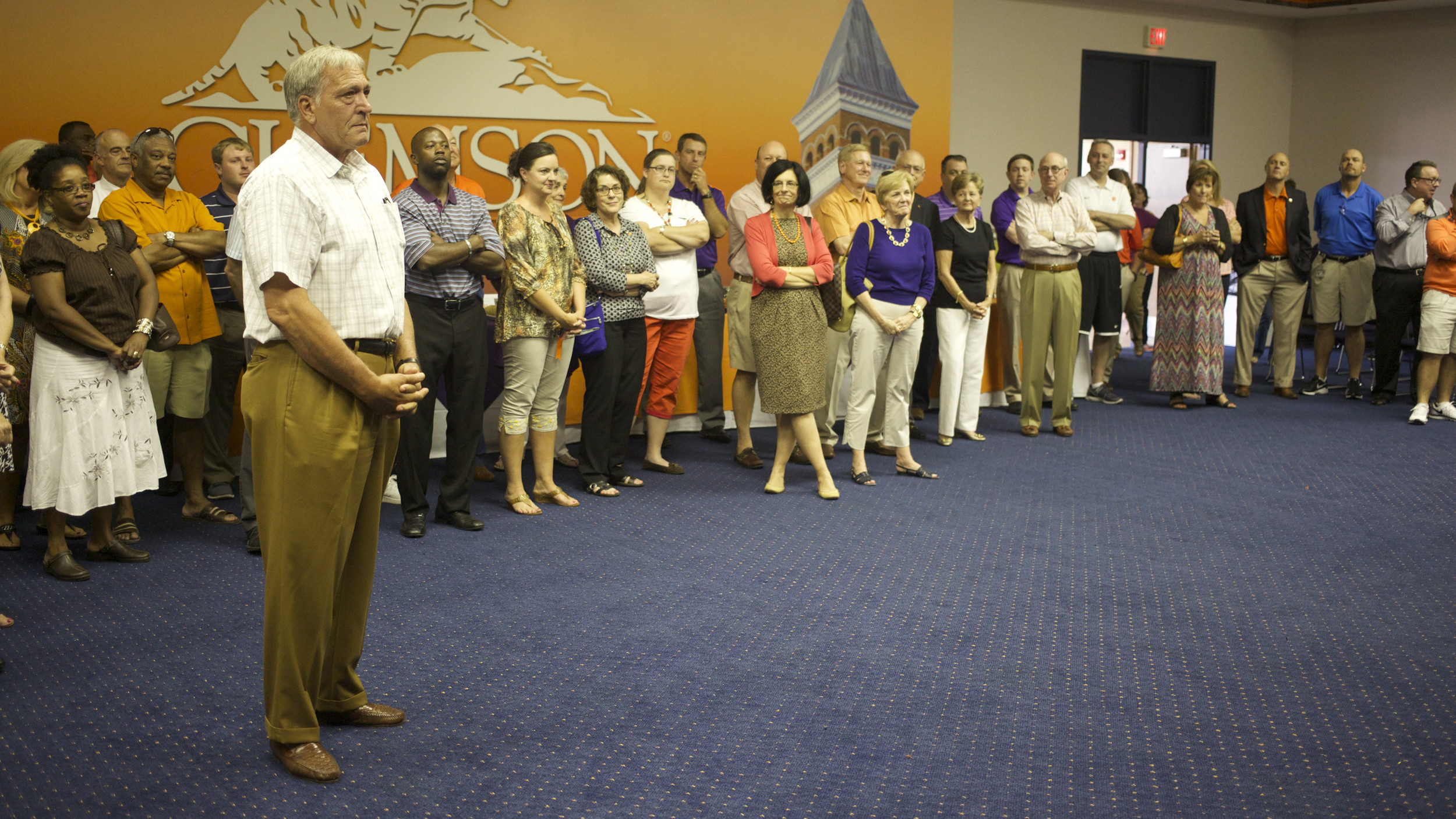 You could make the case that Bill D’Andrea has done more for more people in more different areas of an athletic department than any other Clemson administrator over the last 30 years. With the exception of a two-year stint as an offensive line coach at Southern Mississippi, he has been at Clemson since 1983.

That 30-year run comes to an end this week as D’Andrea retires from Clemson Athletics.

The native of Pittsburgh, Pa., began that fall as a graduate assistant football coach on Danny Ford’s staff. Among his list of duties was to serve as the supervisor of Mauldin Hall, the team’s dorm. In those days, all the football players lived in the same dorm, a rule that was outlawed in 1991, but may surface again in the next couple of years.

D’Andrea, then 32 years of age, was part coach, part father, part Father (as in Flanagan), part academic advisor, and part counselor. On many a night when there was a party that got a little out of hand, or a discipline issue, one of the players would invoke the statement, “You better call Billy D!”

In retrospect, it was the best preparation he could have for the rest of his career.

“We were all in the same dorm in those days, and it was a good thing in many ways,” he said. “You knew where everyone was and it made for good team unity and communication.

“Like all teams, we had some discipline issues that I had to deal with. That helped me make decisions later on in my career because of the experience I gained that fall.”

D’Andrea’s goal professionally at the time was to be a football coach. So, when he had the opportunity to go to Southern Miss as a full-time coach after just one year at Clemson he took it.

“That was a good job for me, because I was in charge of the entire offensive line,” he said. “It was a lot of responsibility and it prepared me to come back to Clemson.”

Prior to the 1986 season, Ford had an opening on his staff and he called D’Andrea to return to Clemson in a full-time capacity.

“I wanted to come back,” D’Andrea recalled. “I really saw what Clemson football was all about when I was a G.A. and I could see Coach Ford was going to have a good program. Plus, my college coach, Larry Van Der Heyden, was on the staff as well.”

D’Andrea was a starting offensive lineman at Indiana State and graduated from the school in 1973.

It didn’t take D’Andrea long to have a positive impact on Ford’s program. From 1986-89, the Tigers posted a 38-8-2 record and his offensive line had a lot to do with it. The Tigers relied on the running game in those days, and ranked in the top 16 in the nation in rushing yards per game each of those four seasons.

In addition to D’Andrea’s expertise as a coach on the field, he demonstrated a desire to help them as much as possible. I first saw this personally in 1989, my first year as sports information director.

Stacy Long came to Clemson in 1986, D’Andrea’s first year as a full-time coach. Long was a raw talent, and he played significant snaps as a true freshman in the Tigers’ win at Georgia.

After a redshirt year in 1987, Long was a top-notch player by 1989 as a junior. After great performances against top-20 teams Florida State and NC State, D’Andrea came to my office and said, “Stacy Long is having an All-America season. You should look at what he did against Ray Agnew (NC State All-American). What can we do to promote him?”

The Sporting News All-America team has long been one of the top five teams selected. D’Andrea suggested, “Why don’t you give me a phone number and I will call the guy (John Hadley) at the Sporting News myself.”

I liked that idea because it would certainly be something that would make Long stand out. I had never had a position coach willing to make a personal call to a member of the media to promote his player.

D’Andrea took the extra effort and made the call, and at the end of the year Long was a first-team Sporting News All-American. The following year, he was a consensus All-American and a finalist for the Outland Trophy.

Long credits D’Andrea with helping him on the field, but more of his thoughts about his coach came after he played for the Tigers.

“He was really a good coach and he helped make me a good player because of his attention to detail, especially when it came to footwork,” Long said. “But the real impact he had on my life took place after I left Clemson. I was not a great student when I was playing. He was always on me about academics. After I got out of school and could not play anymore because of an injury, I understood what he meant.

“He was the first person I called when I finally figured out I needed to get a degree. He was like a father figure to me. I wouldn’t be where I am today without Bill D’Andrea.”

Long is now a father of three and works in Chicago.

D’Andrea was able to help Long on a daily basis because when he came back to Clemson, D’Andrea was the director of Clemson’s student-athlete enrichment program at Vickery Hall.

In 1990, Director of Athletics Bobby Robinson saw something special in D’Andrea and offered him that position.

“You could see from the time Bill was a coach that he had a special talent and a special passion for working with student-athletes,” Robinson said. “When he got out of coaching, I thought he would do very well in running Vickery Hall. And he did.”

When Vickery Hall opened in 1991, it was the first self-standing building dedicated to student-athlete enrichment in the nation.

Within the first three years the program was listed among the best in the nation, and D’Andrea took pride in his personal approach to helping student-athletes in all sports progress academically.

Within six years after he opened the building, the overall GPA of Clemson’s student-athletes rose from 2.33 to 2.71. By 1999, it was at an all-time high of 2.94. The stories of the extra mile D’Andrea worked to help student-athletes with their academic progress are legendary.

One of the best testimonies is given by former Clemson linebacker Nick Watkins, a senior on Clemson’s 2007 team.

“Billy D was like a father to me…he still is,” Watkins said. “I chased my NFL dream and did not do what I should have done to graduate. A few years later I came back on my own and got As in my first two classes. I didn’t tell anyone I was back because I had messed up before. But, Billy D found out I had taken the initiative and arranged for me to get a job and work a plan to pay for my school.

“During that time, my mother died and I had no parents. All my teammates were gone and I felt alone. He helped so much through that entire process.  He didn’t let me go backwards. I earned my degree on Aug. 9, 2013. I will always remember that day. I never would have graduated had it not been for Bill D’Andrea’s help.”

Watkins is now in New Orleans where he works as a teacher and coaches football and basketball at a middle school.

D’Andrea made another significant contribution to the heritage of Clemson Athletics when he moved back to the athletic complex as executive director of IPTAY in 2003.

When Terry Don Phillips took over in 2002, one of his major projects was to build the WestZone at Memorial Stadium. To finance the project, he knew some major changes had to be made when it came to the structure of season tickets and fundraising.

“I needed someone who was respected in the athletic department, in the community and across our fan base to implement this program,” said Phillips, now retired and living in Clemson. “It was not going to be easy because it was a totally different way of doing things. But, Billy D was a great diplomat.

“We needed his expertise in dealing with people, his credibility. His implementation of the program allowed us to build the WestZone and at the same time remain in good position financially.

“He had a unique ability to pull people together for a goal. Now look what the football program has done over the last three years. You can make a connection to the opening of that facility in 2009. The Tajh Boyds and Sammy Watkins were recruited after the completion of that facility.”

While D’Andrea has been a great asset to student-athletes, fans and administrators, he has also done so much for Clemson coaches in all sports over the last 25 years (since he moved into administration).

He was a confidant for both Robinson and Phillips when it came to coaching searches, whether it is football, basketball or any other sport. He was at the forefront of the hires for current Clemson coaches Dabo Swinney and Brad Brownell.

“Billy D has done so much for our program in so many ways,” said Swinney, who first came to Clemson as an assistant coach in 2003. “With his wealth of experience, including his time as an offensive line coach, he has been invaluable when it comes to administrative matters, discipline, academics or fundraising.”

Over the last 30 years there have been a lot of people in Clemson Athletics who needed some help or advice. Invariably, there was one initial step to reach a solution.