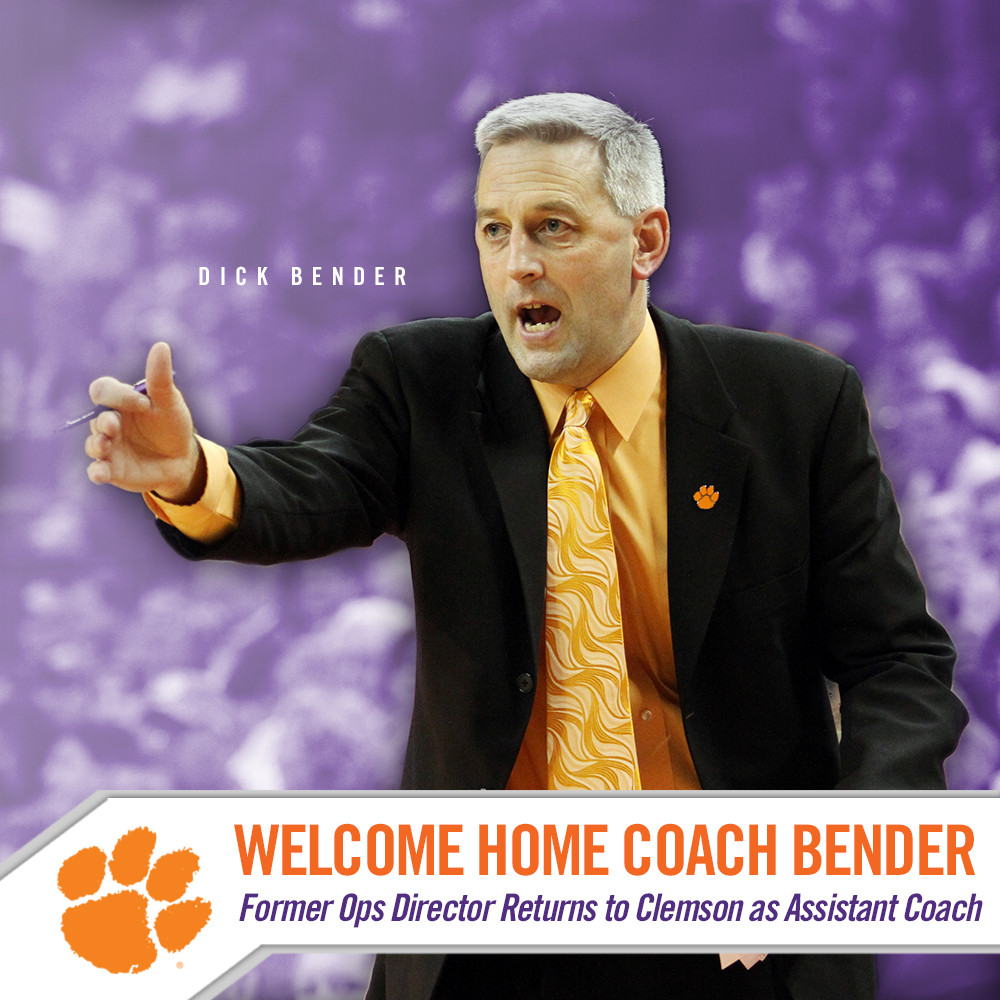 CLEMSON, S.C. — Dick Bender, Clemson’s former director of men’s basketball operations, has been hired as an assistant coach for the Tigers. Bender returns after two seasons as an assistant coach under Earl Grant, who left Clemson in 2014 to take the head coaching position at College of Charleston. Bender replaces Richie Riley, who was named head coach last month at Nicholls State.

“I am excited about the return of Coach Bender, who was an integral part of our early success at Clemson,” said head coach Brad Brownell. “He is a tremendous tactician and skill development coach with great knowledge of our system and the ACC. He has strong recruiting ties in the Midwest and has done a good job recruiting in the Southeast these past two years while working at the College of Charleston.”

In two seasons at Charleston, Bender helped orchestrate an eight-win improvement overall from 2014-15 to 2015-16. The Cougars went 17-14 in Bender’s second season on staff, with an 8-10 record in the Colonial Athletic Association. Six of the Cougars’ players earned postseason honors, including Cameron Johnson, an All-CAA Third Team and All-Defensive Team selection.

“I can’t express enough how grateful I am to rejoin Coach Brownell, his staff and all the tremendous people that are a part of Tiger nation,” Bender said. “I only hope to embrace on what Coach Brownell has built here, the passion to elevate the program and the excitement of moving into our new Littlejohn basketball facility. It is great to feel the power of the Paw again!”

Bender served as Clemson’s operations director in Brownell’s first four seasons, 2010-14. During that stretch, the program compiled a 74-58 record and advanced to the postseason on two occasions, including the 2011 NCAA Tournament. In 2013-14, his most recent season, he was part of a staff that saw the Tigers improve their overall record by 10 wins and advance to the semifinals of the NIT.

In his first season at Clemson, Bender was an important part of the staff that led the Tigers to a 22-12 final record in 2010-11. Clemson was the No. 4 seed in the ACC Tournament with a 9-7 record. The Tigers advanced to the NCAA Tournament for a record fourth straight season and won their first-round game over UAB, 70-52, in Dayton, Ohio.

Bender brought nearly 25 years of collegiate coaching experience, including 18 at the Division I level, to the Tiger staff when he was hired in 2010. He began his collegiate coaching career at DePauw in 1987 under the late Royce Waltman. He helped the Division III Tigers to an outstanding four-year overall record of 80-30 and to a national runner-up finish in the 1990 NCAA Tournament. One of the players he coached was Brownell.

After his stint with DePauw, Bender served as an assistant coach under Ron Bradley at Radford from 1991-97. The Highlanders compiled the top conference record and non-conference record of all the teams in the Big South during Bender’s six seasons with the program.

Bender was reunited with Waltman as part of the staff at Indiana State and coached with the Sycamores for 10 seasons from 1997-07. He helped ISU to consecutive 20-win seasons and NCAA Tournament appearances in 1999-00 and 2000-01. The Sycamores went on to upset No. 4 seed Oklahoma, 70-68, in the first round of the 2001 NCAA Tournament.

The native of Grantsville, Md., graduated from Western Maryland in 1986 and earned a master’s degree from DePauw in 1989. He was a two-year letterman and team MVP at Western Maryland. He was third in the nation in 1985-86 in free throw accuracy for Division III players with a 91 percent clip.

Bender and his wife, Beth, have two sons, Dalton and Dillon.