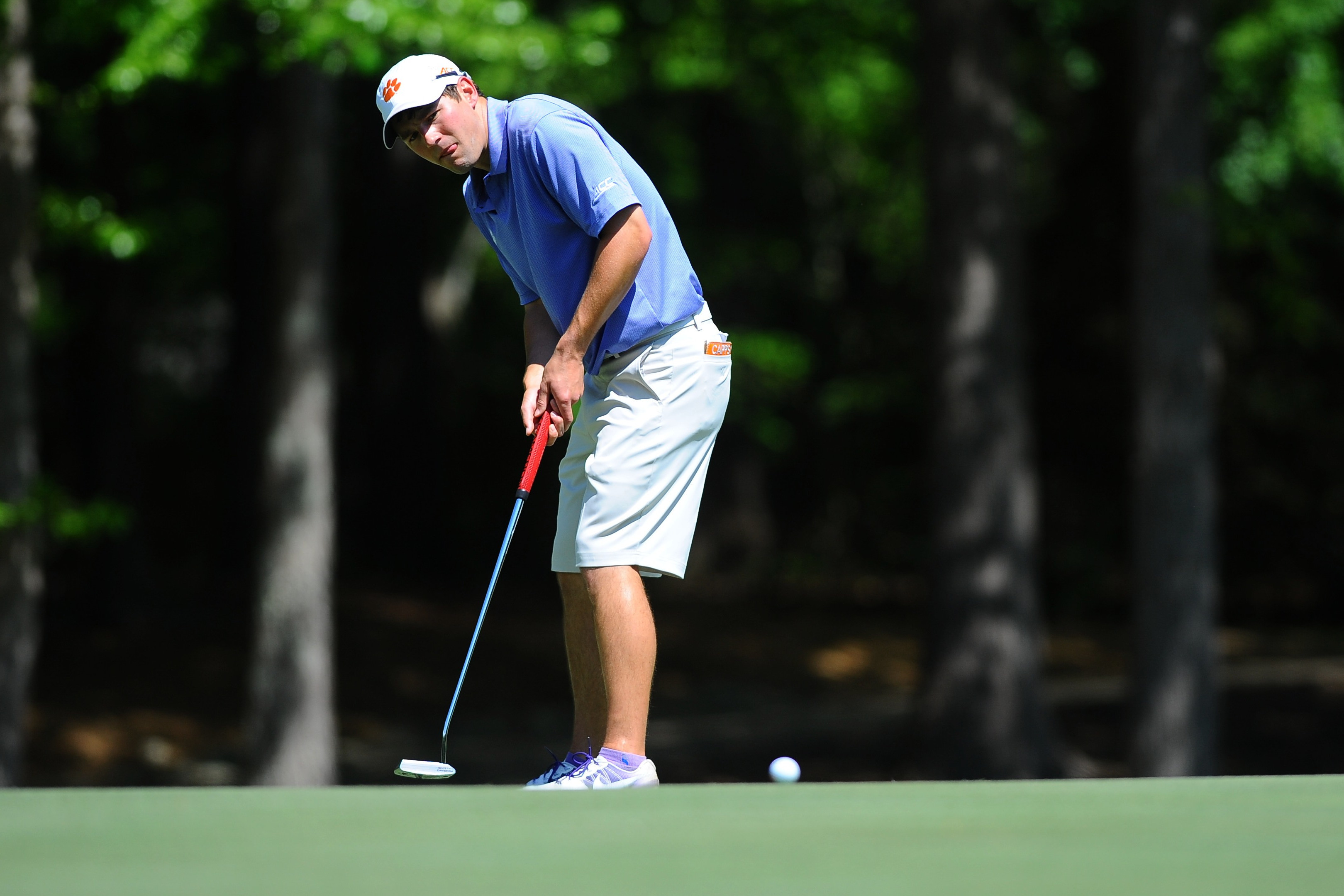 Behr Tied for 15th after Two Rounds at NCAA Golf

Eugene, Ore. –Stephen Behr shot a one-under-par 69 and classmate and graduate Miller Capps added an even-par 70 to lead Clemson to a 284 team score in the second round of the NCAA National Tournament in Eugene, Oregon.  The Tigers are tied for 15th place in the 3- team field after two rounds with a score of 15-over-par 575.

Clemson is tied with SEC schools Auburn, Georgia and Kentucky, and San Diego State. The field will be cut to the top 15 teams after play on Sunday.  There will be a tie-breaker if there is a tie for 15th.

Clemson was in 22nd place when it finished its second round, but there were still 15 teams on the course. Clemson’s 284 score was seven shots better than the 11-over-par 291 Larry Penley’s team had on Friday.   Clemson played in the afternoon wave on Friday and the morning wave on Saturday.

The Tigers played the back nine first on Saturday and shot three-over-par as a team, 10 shots better than they shot on the back on Friday afternoon.  Clemson then played the front nine in one-over-par.

Penley was pleased with his team’s performance.  “We were way better today than we were on Friday,” said Penley, who has a team in the NCAA National Tournament for the 26th time.  “We have gotten consistent play from Stephen Behr and Bryson Nimmer both days, and Miller Capps played very well today, especially with his finish (birdied his last two holes).

“But to do something at this tournament we must have good rounds from Austin Langdale and Carson Young.  We need all five players in the game.   This is a very strong field so we are going to need everyone involved.”

Capps was a key to Clemson’s improvement on Saturday.  The native of Denver, N.C. started out with bogeys on his second and third holes, but he started making some birdies, including the eighth and nine holes, his 17th and 18th holes of the day.

“I busted my drive on the ninth hole and had 134 yards left,” said Capps. “ I hit a wedge past the hole and thought it would spin back, but it didn’t.  I still had about 12 feet left and made the putt. “  Capps also made a 10 footer on the eighth hole, his 17th hole of the day.   Capps had five birdies on Saturday and now has 416 in his Clemson career, sixth in school history.

“I made an adjustment in my putting setup during the round and I stuck with it,” said Capps.  “After I missed two short putts early, I needed a change.  To be successful out here you have to be disciplined.  That will be the key for us going forward.”

Behr had a second round 69 that is the low round of the tournament by a Clemson golfer.  He is in sixth place individually entering the third round with a 139 total and would certainly be a candidate to play as an individual on Monday if Clemson misses the team cut.  His best shot took place on the 18th hole, his ninth hole of the day, when he hit a five iron 183 yards over a greenside bunker to within three feet of the pin.  He made the putt for birdie, a three-shot improvement over his double bogey on the same hole on Friday.

Bryson Nimmer had another solid performance with a one-over-par 71 to go with his open 70.  The freshman from Bluffton, S.C. had just one birdie, but had just two bogeys in scoring his 71.   His 15 pars were the most by a Clemson golfer in a round so far in the tournament.  He stands in 24th place with a 141 total.

Carson Young shot a four-over-par 74 that included four birdies.  The junior played the last three holes at one-under-par.  His classmate and former high school teammate Austin Langdale shot a 75, but made two birdies in his last three holes.  It was just the second time this year in 32 rounds his score did not count towards the Clemson team score.