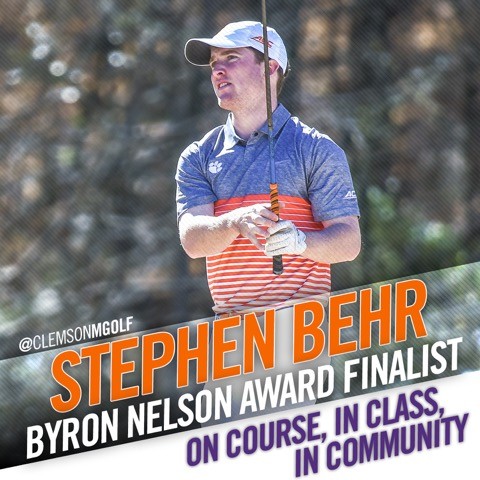 Clemson, S.C.—Clemson graduate student golfer Stephen Behr has been named one of five finalists for the Byron Nelson Award.  The award that is presented by Cleveland Golf and Srizon is given each year to a graduating senior for his excellence in academics, golf, character and integrity while a college student.

Behr is joined on the list of finalists by Alex Burge and Charlie Danielson of No. 1 ranked Illinois, Jordan Niebrugge of Oklahoma State and Chris O’Neill of Michigan.  Behr is the first Clemson golfer to be named a finalist for the award.

Behr graduated last year with a 3.91 undergraduate average in finance. He has been a four-year starter and a three-time Academic All-ACC selection.  Twice he has been named an Academic Scholar by the Golf Coaches Association and was a third-team Academic All-American according to CoSIDA last year.

This year he has been Clemson’s top player with a 71.91 stroke average and was ranked 14th in the nation by Golfweek.  He is also a strong candidate for the United States team in the Arnold Palmer Cup matches that will be played this summer.  He has a team best five rounds in the 60s, three top five finishes and 10 rounds at par or better.  Clemson is ranked 10th in the latest Golfweek/Sagarin poll and 11th in the latest Golf Coaches Association poll.

Behr will lead the Tigers in the Clemson Invitational April 1-3 at the Cliffs at Keowee Falls Course in nearby Sunset, S.C.  It will be the first time Clemson has hosted a tournament since the 1980s.