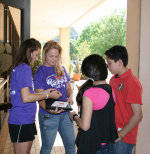 Clemson fans could not have asked for a more beautiful day in which to enjoy the Seventh Annual Be a T.I.G.E.R! Field Day and National Student-Athlete Day events held prior to the highly anticipated Spring Football Game on Saturday, April 10, 2010. Over 1000 children and their families participated in the Field Day, along with the National Student-Athlete Day athletic facility tours. Nearly 90 Clemson student-athletes volunteered their time planning and executing this day of fun for children of all ages.

The Field Day was geared towards children elementary-age and younger, as they participated in a series of activities teaching them about the acronym T.I.G.E.R. which stands for the character traits of teamwork, integrity, gratitude, education and respect. All throughout the afternoon, kids could be found playing tug-of-war against athletes, dribbling a soccer ball through cones without cheating, finger printing and signing a banner for military troops, discovering international student-athletes’ home countries, and respecting their bodies while exercising on rowing ergs, among others. Along with the fun activities, families also enjoyed the presence of local vendors including Bi-Lo, Clemson Empower, Zest Quest, Parents Upstate, Coca-Cola inflatables, and even the CU Fire Department fire-truck. This year’s event produced the best turnout yet as numerous families again enjoyed an afternoon of smiles and interaction with their favorite Tiger student-athletes.

The first ever National Student-Athlete Day was also a huge success. Participants were led on tours of the athletic facilities giving them a little insight into “A day in the life of a Clemson student-athlete.” Facilities included in the tour were Doug Kingsmore Stadium, McFadden, Jervey Athletic Center and the West End Zone. At each stop, athletes presented information about training methods, academics, nutrition, weight training and competition. Visitors were given an inside look behind the scenes to see what the student-athlete does in a typical day. Clemson was one of many schools across the nation to celebrate this national day recognizing the student-athlete.