Sorry if we scared you.

CLEMSON, S.C. — No. 1 Clemson scored 24 unanswered points to overcome a 15-point halftime deficit and defeat Boston College 34-28 at Death Valley on Saturday, advancing to 7-0 and 6-0 in the ACC. The Eagles (4-3, 3-3 ACC) were held scoreless in the second half as the Tigers successfully closed out their comeback.

In his first career start, D.J. Uiagalelei dazzled, going 30-41 passing for 342 yards and two touchdowns. The highly touted freshman quarterback also added 25 yards and a touchdown on the ground in place of junior standout Trevor Lawrence.

Travis Etienne totaled 224 all-purpose yards, including 84 rushing on 20 carries, making him the all-time ACC leading rusher with 4,644 career yards on the ground. The previous record (4,602) was held by N.C. State’s Ted Brown, and had stood since 1978. His 140 yards receiving broke his own record set earlier this season against Virginia (114) for most receiving yards by a Clemson running back in a game.

The Eagles opened the game with a four play 74-yard touchdown drive, but the Clemson offense responded when Uiagalelei threw the first touchdown pass of his career, a 35-yard catch and run by Etienne. Boston College added another touchdown and took a 14-7 lead into the second quarter.

Early in the second frame, The Tiger offense was two yards from the goal line when an Etienne fumble was scooped up by the defense and returned 97 yards for a touchdown. With the score, Clemson faced its first regular season deficit of at least 14 points since 2014.

Following a B.T. Potter field goal, the Eagles marched down the field on a 15-play, 75-yard touchdown drive, culminating in an 18-yard touchdown reception. The drive took 7:42 off the clock and left Clemson with only 1:02 in the half to respond. The Tigers did so with a well-executed drive into Eagle territory and Potter drilled a 50-yard field goal to cut the deficit to 28-13 at the half.

The Tigers opened the second half scoring with a crucial touchdown when Uiagalelei kept the ball on 4th and one and scampered for a 30-yard score, the longest run of his career. Following a Boston College three-and-out, Clemson once again went on a scoring drive, this time resulting in an eight-yard touchdown strike from Uiagalelei to Amari Rodgers. After a failed two-point conversion attempt, the Tigers kicked off trailing 28-26.

Clemson took their first lead of the game in the fourth quarter, when Etienne found space between the tackles and dashed for a 17-yard touchdown. A missed extra point kept the score at 32-28 with 11:34 left to play.

The Eagles had possession down four points with 1:24 to go in the game on their own four yard line, but on the first play of the potential game-winning drive, freshman Bryan Bresee forced an intentional grounding penalty in the endzone, which gave the Tigers a safety. Uiagalelei kneeled out the clock and recorded his first win as a starting quarterback.

The Tigers will be back in action on Saturday, Nov. 7, when they travel to Notre Dame to battle the Fighting Irish. Kickoff for that matchup is scheduled for 7:30 ET on NBC.

Coach Swinney to the team at halftime: "Don't flinch." pic.twitter.com/SEWEWt7SR5 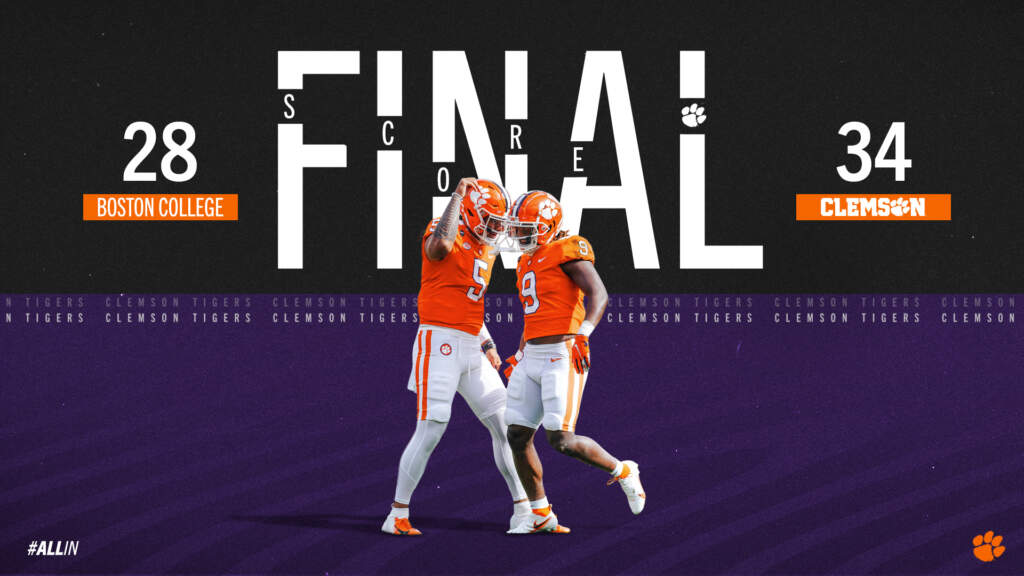