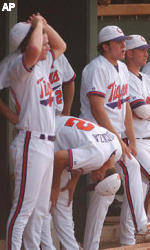 Waco, TX (AP) – Mark McCormick struck out 10 and scattered five hits to lead Baylor to a 7-1 win over Clemson in an NCAA super regional Sunday.

“The first time through the lineup, I threw almost all first-pitch fastball,” McCormick said. “After that, I mixed it up and went to my slider because it worked.”

“I really didn’t think it was gone, but the wind switched direction,” Mandel said. “We had our backs to the wall, and we wanted to get on them early today.”

Paul Witt scored on a bunt by Chase Gerdes and Ford singled to score Michael Griffin in the sixth.

Clemson’s only run came in the third on an RBI infield single by Taylor Harbin.

“We couldn’t get much going today,” Clemson coach Jack Leggett said. “Their guy had command of all his pitches.”