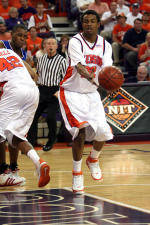 Clemson needs one win to reach the 20-victory mark for theseason. Clemson has had just seven 20- win seasons in its history.The previous 20-win season came in 1998-99 when Clemson was 20-15after reaching the finals of the NIT. Clemson has a 1-0 recordagainst Louisville head coach Rick Pitino. The Tigers defeatedPitino’s Kentucky team to open the 1996-97 season, 79-71 inovertime in the Hoosier Dome in Indianapolis. Kentucky was thedefending NCAA Champion and ranked third in the nation entering thegame. It is still the highest ranked non-conference team Clemsonhas defeated in its history. Clemson is 0-2 all-time againstLouisville. The Cardinals won at Clemson in 1973-74 by a four-pointmargin, then Louisville won the next season in Freedom Hall, 90-75.Louisville advanced to the Final Four that year. Clemson centerAkin Akingbala had 16 points and 11 rebounds in Clemson’s win overLouisiana Tech in the opening round NIT contest. He out-reboundedNCAA Rebounding leader Paul Millsap of Louisiana Tech by an 11-9margin even though Millsap played more minutes (32-27). Akingbalahad just three double-doubles in his first 94 games at Clemson andnow has had seven double-doubles in his last 10 contests. Clemsonstarting forward KC Rivers was a teammate of Louisville startingcenter Brian Johnson last year at Oak Hill Academy. They were twoof the reasons Oak Hill was ranked #1 in the nation by USA Today.Shawan Robinson has made .911 of his free throws to lead the ACCthis season (5th in the nation). J.J. Redick is second at .877.Robinson is trying to become the first Clemson player since 1966-67to lead the ACC in free throw shooting. Clemson has a 11-12 recordin the NIT and Louisville is 12-13. This is Clemson’s 13thappearance in the event, more than any other ACC team. OliverPurnell has a 7-6 record in the NIT over his career. Clemson’sfirst ever postseason tournament victory took place in the state ofKentucky. In the first round of the 1979 NIT, Clemson upsetKentucky in Rupp Arena by a 68-67 score in overtime. Clemson madeits last 15 free throws in the victory over Louisiana Tech and made20-25 for the game. The Tigers held Louisiana Tech to 16 points inthe first half of the NIT opener, the fewest points allowed in ahalf since Northwestern had just 15 in the second half of a Tigerwin on November 28, 2000. Cliff Hammonds had 21 assists and justfour turnovers over his last five games. He is fourth in the ACC inassist/turnover ratio.