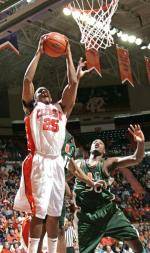 Clemson will face Miami (FL) in the first round of the ACC Tournament at the Greensboro Coliseum on Thursday, March 9 at Noon Eastern time. It will be the first game of the four-day 53rd annual Tournament. Miami enters as the #8 seed, while Clemson is the #9 seed. The winner will face #1 seed Duke on Friday at noon.

Clemson and Miami (FL) met just once this year and Miami (FL) defeated Clemson 62-38 in Miami (FL) on January 18. It was the largest margin of defeat for the Tigers all season and one of just two games this year that Clemson lost by more than 10 points.

Clemson enters the tournament with an 18-11 record, including a 7-9 ledger in ACC play. The 18 wins are the most in the regular season for a Clemson team since 1996-97 and the seven ACC wins are the most since the 1997-98 season. Miami (FL) also has a 7-9 record in the ACC and the Hurricanes have a 15-14 overall mark. Clemson has won four of its last five, while Miami (FL) has won just one of its last five.

“We have a lot of respect for the University of Miami,” said Clemson Head Coach Oliver Purnell. “They defeated us with a very solid performance in Miami the one time we played this year. They have a terrific group of guards in Anthony Harris, Guillermo Diaz and Robert Hite, but their inside guys are very difficult to handle also. They can defend and block shots. They play very well from a team defense standpoint. It will be quite a challenge for us.”

Clemson has a 5-4 advantage in the series, but Miami (FL) has won the last four, including all three since the Hurricanes joined the ACC prior to the 2004-05 season. Clemson’s last win in the series took place at Miami (FL) in December of 1995 by a 66-52 score in overtime.

Shawan Robinson is Clemson’s top scorer entering the tournament with a 12.6 average, including a 20.0 average over his last five games. Vernon Hamilton is second on the club in scoring with a 12.1 average, including a 24-point outing in Clemson’s victory over Georgia Tech on Saturday. Akin Akingbala, who has scored in double figures in 10 of his last 11 games, has an 11.7 average and leads the team in rebounding with a 7.8 average.