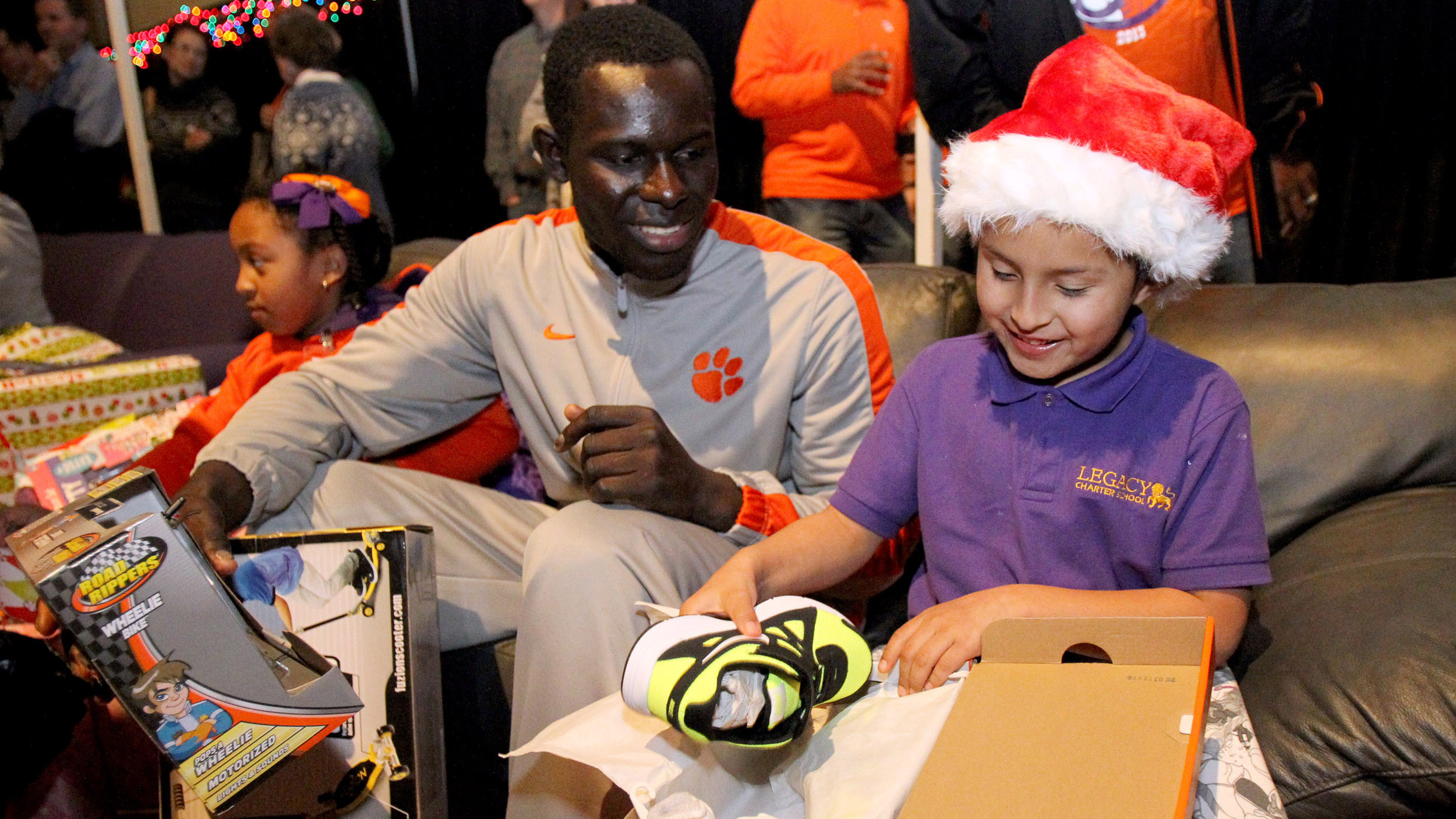 Basketball Teams Give Back to Community with Tiger Wonderland

The event was the fourth annual Tiger Wonderland, where the Clemson men’s and women’s basketball teams hosted 25 area children from Clemson Community Care to make sure they had the opportunity to have a merry Christmas.

“I’m at the age now where I don’t get anything anymore,” men’s junior guard Damarcus Harrison said. “Once you’re about 22 years old, Christmas basically ends for you. So it’s a lot of fun to get to see the smiles on their faces.”

Clemson Community Care is a local organization that provides assistance with basic needs such as food, shelter and utilities for area families in need.

For Tiger Wonderland, the organization works with the Clemson basketball office to provide a list of children, and the children’s parents provide their clothing sizes and a wish list of toys.

“It’s the highlight of our Christmas season,” said Karen Ellers, director of Clemson Community Care. “It’s just a wonderful experience for everybody involved.”

The organization gives different children the opportunity to take part each year in order to share it with as many client families as possible, and Ellers said her staff starts getting calls about it early in the holiday season.

While Tiger Wonderland is the main event of the night, simply getting to see all the Clemson athletic venues is also a big treat for the children, even though most of them live nearby.

“They’re Clemson fans, but as much as we take for granted coming to Littlejohn and going to Death Valley, a lot of these children have not done that,” Ellers said. “So on the bus on the way over, they took them by Howard’s Rock and by the baseball stadium and by the indoor practice field before they came here. I think we could’ve just kept them on the bus and they would’ve been happy.”

Once they were off the bus, the children were paired with a member of the men’s or women’s team, and the groups made their way through the arena concourse, which had been turned into a veritable winter wonderland by the Littlejohn Coliseum staff.

“Littlejohn and its staff do an amazing job at decorating the coliseum to become a winter wonderland,” Assistant Director of IPTAY Lindsey Leonard said. “Aramark does a great job at catering, and then BI-LO also helps us by providing cupcakes and goody bags, as well.”

After an arts-and-crafts session and some holiday treats, the groups shared a meal and then proceeded toward a large Christmas tree where Santa Claus was waiting with presents for each of the children to open.

Of course, opening the presents is the highlight of the night for most of the children, and each of them are provided with a full outfit of clothes, as well as toys off their Christmas list.

“It’s just awesome to get to hang out with these kids, get to know them, and see them smile and be so happy when they open their presents,” women’s junior guard Kelly Gramlich said.

Academy Sports, Aramark and BI-LO are the primary sponsors of the event. The shopping was done at Academy, while Aramark provided the food, and BI-LO provided the crafts and also funded the gifts the children received.

“It’s special for the kids, but I also think it’s really special for the players,” Leonard said. “It’s a time when they’re busy with finals and really getting into the meat of their basketball season, and they get an opportunity to relax one night and just give back to the community.”

And Harrison agreed that the event allowed the players to get into the spirit of the season themselves.

“It’s all for the kids,” Harrison said. “We have the opportunity to give them presents and watch them get all excited unwrapping their gifts. It’s very fun that we can be positive role models for these kids and spend a day with them. A lot of them, they don’t get a lot of this stuff, and it’s fun just to share the Christmas spirit with them.”