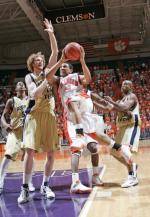 Basketball Looks to Rebound at Georgia Tech on Saturday

Go Figure— Clemson shot 54.1 percent from the field, thebest percentage against Duke since the 2003 ACC Tournament (90games ago) when Virginia made 57 percent of its shots. The verynext game at Miami (FL) Clemson made just 25.4 percent of its shotsfrom the field, the worst field goal percentage by a Tiger teamunder Oliver Purnell. While Clemson shot just 25.4 percent from thefield at Miami, the Tigers did have three different players shootat least 60 percent in the game. Sam Perry, Akin Akingbala and K.C.Rivers were a combined 8-13 in the game. Shawan Robinson needs 25points to reach 1000 for his career. He has 170 career three pointgoals to rank third in Clemson history and his .813 career freethrow percentage is ninth best. Robinson had 21 points at Tech in2003-04, the high scoring game of his career in an ACC road game.Clemson ranks 3rd in the nation in steals per game and 17th inblocked shots per game. Clemson, Syracuse and Colorado are the onlythree teams to rank in the top 20 in both categories this week.Last year Clemson was the only school in the nation in the top 20in both areas. Georgia Tech swept Clemson in a pair of games lastyear, winning both contests by eight points. Tech has won fivestraight against Clemson overall and each of the last three playedin Alexander Memorial Coliseum. Clemson had not lost a game by morethan 10 points this year and over a 25-game span prior to the 24-point loss at Miami (FL) on January 18. That 25 game streak withouta loss by at least 11 points was the fourth longest streak of itskind in Clemson history. The record is 30 straight games without aloss by more than 10 points between January 31, 1980 and January17, 1981. Prior to the Duke game on January 14, Clemson was theonly school in the nation that had not lost a football or men’sbasketball game by seven points or more this year. Georgia Techguard Zam Fredrick is the son of former South Carolina guard ZamFredrick, who led the nation in scoring in 1980-81. The elderFredrick once scored 35 points against Clemson in LittlejohnColiseum, including an 11-11 performance at the foul line (Feb. 8,1981). Clemson leads the ACC in offensive rebounds per game at15.4. The leader in that area is Akin Akingbala, who ranks eighthin the ACC (3.4). Vernon Hamilton is Clemson’s leading scorer witha 13.1 average. He had scored in double figures in nine of his last11 games prior to a five-point outing at Miami (FL). He had acareer high 31 points against #1 ranked Duke last Saturday.