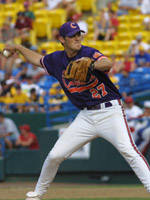 Clemson, ranked as high as #12, will open the 2003 season at #16 Auburn (6-2) this weekend in three intersectional games at Hitchcock Field at Plainsman Park in Auburn, AL. Game one Friday will start at 4:00 PM EST. Game two will begin at 3:00 PM EST, while the series finale Sunday will start at 2:30 PM EST. The games on Friday and Saturday will be broadcast live on the radio by WCCP (104.9 FM) out of Clemson and can be heard live via the internet at www.clemsontigers.com. Live stats will also be available for all three games on Clemson’s website.

The Tigers will be opening their season on an opponent’s home field for the first time since 1991, when Clemson won both games at Georgia Southern. Auburn, led by third-year Head Coach and longtime Auburn assistant Steve Renfroe, leads the all-time series 40-37-3 dating back to the first game in 1901. Ironically, John Heisman, who was also a football at Auburn, coached his first two games as Clemson’s head baseball coach against Auburn (both victories) in 1901. He also defeated Auburn in 1903 and was 3-0 against the Tigers from Alabama.

Despite the three-game lead for Auburn, Clemson has won 12 of the last 13 meetings, including four in a row at Auburn. Clemson last visited Auburn in 1992 and won both games that year. Auburn handed Clemson an 11-5 loss in the 1994 NCAA East Regional at Clemson, propelling the SEC Tigers to the College World Series.

Clemson swept Auburn in three games last year to open the season by scores of 7-4, 8-5, and 6-5. In that series, second baseman David Slevin led the Tigers with a 5-for-9 performance. Kyle Frank and Collin Mahoney hit his first career homer off Eric Brandon. Clemson outhit Auburn .333 to .283 last year. Steven Jackson allowed just four hits, one run, and two walks while striking out six in 6.0 innings pitched to lead all Tigers on the mound. Paul Harrelson (2) and Tyler Lumsden (1) also picked up saves in the series.

Clemson Head Coach Jack Leggett is 4-1 against Auburn as the Tiger skipper, but has yet to face the Tigers at Auburn. Leggett, in his 10th season as Clemson’s head coach, is 52-25 (.675) against SEC teams while at Clemson, including an 18-13 record on opponents’ home field. Leggett was also 6-12 against Auburn as Western Carolina’s head coach (1983-91).

Auburn will start sophomore lefty Arnold Hughey (1-0, 2.08 ERA) in game one. Junior righthander Colby Paxton (1-0, 0,00 ERA) will start game two. Paxton allowed just three hits and no runs in 5.1 innings pitched in his only start this season. Brandon, a junior righthander (0-1, 10.45 ERA), will start game three. Brandon suffered a tough no decision against Clemson last year. His next outing, he tossed the school’s first perfect game against Murray State. Auburn has a 5.50 ERA and .299 opponents’ batting average this season. Ken Clayton, a sophomore righty on Auburn’s squad, is the brother of Clemson freshman righthander Pat Clayton.

Auburn is hitting .326 as a team and is led by Scott Schade, who is hitting .407. Josh Bell has two homers and five RBIs along with a .387 batting average, while Clete Thomas and Javon Moran have nine RBIs and eight RBIs, respectively. Clemson outfielder Zane Green and Moran were teammates at Lowndes High School in south Georgia.