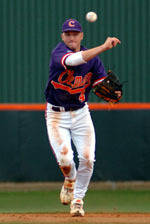 The Starting Pitchers Duke’s three starting pitchers for the series have yet to be announced.

The Tigers will start senior righthander Josh Cribb (8-0, 2.66 ERA) on Sunday. The Lake View, SC native has made 10 starts and one relief appearance for a total of 61.0 innings pitched. He has allowed 45 hits (.207 opponents’ batting average) and 16 walks with 60 strikeouts.

The Tigers will start junior righthander Stephen Faris (5-2, 2.82 ERA) on Monday. The Richmond, VA native had made 11 starts for a total of 60.2 innings pitched. He has a .232 opponents’ batting average, allowing 51 hits and 12 walks with 52 strikeouts.

The Tigers hold a 42-25 lead over the Blue Devils all-time in games played at Duke. Clemson also holds a 84-30-1 advantage in games played in the ACC regular season. Tiger Head Coach Jack Leggett is 28-10 against Duke as Clemson’s head coach, including a 12-6 record at Jack Coombs Field.

The Blue Devils Duke, led by first-year Head Coach Sean McNally, enters the series with a 14-33 overall record and 6-18 mark in the ACC. The Blue Devils last games came a weekend ago against North Carolina at Jack Coombs Field. The Tar Heels swept Duke in three games. Duke is 9-20 at home this season.

The Blue Devils are hitting .275 with a .339 on-base percentage and 42 stolen bases in 60 attempts. They also have 31 sacrifice bunts, including eight each by Jonathan Anderson and Matt Williams. Duke is fielding at a .957 clip as well.

Anderson leads the squad with a .320 batting average. Jimmy Gallagher is second with a .311 average, five homers, and 32 RBIs. Brett Bartles leads the team in both homers (7) and RBIs (38). The pitching staff has a 6.74 ERA and .319 opponents’ batting average. It has allowed 152 walks with 250 strikeouts. Three different Blue Devils have accounted for the team’s three saves.

The Tigers Clemson enters the series with a 33-13 overall record and 15-6 ACC mark. Before the Tigers had six days off for final exams, they swept Virginia Tech in a three-game series at home by a combined score of 29-9. Clemson is in first place in the Atlantic Division standings and second place overall behind North Carolina (18-6).

The team is hitting .291 with a .364 on-base percentage and 64 stolen bases in 81 attempts. Clemson also has 92 doubles, 49 home runs, and 35 sacrifice bunts in 46 games. The Tigers sport a .970 fielding percentage as well. In the last six games, Clemson has committed just one error.

Tyler Colvin leads the club with a .337 batting average along with 19 doubles, seven homers, 39 RBIs, and 14 stolen bases. Brad Chalk is hitting .329 with a .441 on-base percentage, 14 sacrifice bunts, and 11 steals. Travis Storrer has hit seven home runs in the last 10 games and has nine on the year. Andy D’Alessio leads the team in both homers (13) and RBIs (58).

Worth Noting * With three weekends remaining in the ACC regular-season schedule, the eight-team field for the 2006 ACC Tournament is already set. Clemson, Florida State, Georgia Tech, Miami (FL), North Carolina, N.C. State, Virginia, and Wake Forest will comprise the field for the double-elimination tournament at The Baseball Grounds of Jacksonville (FL) from May 24-28. Seedings will be determined based on results during the remainder of the regular season.

Polls Clemson climbed one spot to #8 in the Baseball America poll on Monday after a 4-0 week. The Tigers also jumped to #9 in the Collegiate Baseball poll and #9 in the Sports Weekly poll.

Leggett Sees Leggett Go Deep A special moment for Head Coach Tanner Leggett came on April 28 against Virginia Tech at Doug Kingsmore Stadium. Tanner, who is a reserve infielder and red-shirt junior, entered the game 0-for-4 on the season. The elder Leggett called on Tanner to pinch-hit in the seventh inning.

In the previous game against Wofford two days earlier, he had hit a deep fly ball to the terrace in left-center, but the ball was caught near the fence. But against the Hokies, he connected on a home run that easily cleared the fence closer to the left-field line. It was not only his first hit of the season, but the first home run of his career. After rounding third base, father and son gave each other an extra-long handshake near the coaching box.

Criteria for consideration for the trophy include performance on the field, moral character, and courage, qualities that were exemplified by Dick Howser’s life. Howser was a player and coach at Florida State before becoming a manager in the Major Leagues with the Kansas City Royals. He died in 1987 of brain cancer.

Storrer Supplying Power of Late Travis Storrer is more of a line-drive hitter than long-ball slugger, but if you look at his stats of late, you would think he was the latter. In his first 32 games, he hit two home runs. But in the last 10 games, he has hit seven long balls. In the last 10 games, he is also 13-for-33 (.394) with 13 runs scored, two doubles, 16 RBIs, and a 1.091 slugging percentage. Storrer, who has nine homers this season, has been hampered by nagging injuries most of the season, but has discovered his swing of late. He previous season high for homers was seven as a sophomore in 2004.

Smith National & Co-ACC Player-of-the-Week Junior infielder Marquez Smith was named one of five national players-of-the-week by Collegiate Baseball and Co-ACC Player-of-the-Week on May 1. In four games from April 26-30, he hit four home runs with seven RBIs and did not commit an error in 12 chances at third base to lead the Tigers to a 4-0 record. He had two multi-homer games, including two solo shots against Wofford on April 26 and two homers with five RBIs against Virginia Tech on April 29. The five RBIs were three more than his previous career-high total of two.

Tigers Slug Virginia Tech in Sweep Clemson, ranked #9 in the nation, swept Virginia Tech by a combined score of 29-9 in a three-game series at Tyler Colvin was 5-for-9 with two doubles and three RBIs. Travis Storrer each added two home runs. Clemson’s pitching staff had a 3.00 ERA and struck out 30 batters compared to seven walks. The Hokies left 23 runners on base to Clemson’s 11 as well.

In game one, Clemson scored five runs in the second inning on its way to an 11-2 win over Virginia Tech on April 28. Storrer capped the five-run inning with a two-run homer. Every Tiger starter had at least one hit by the fifth inning, as Clemson totaled 14 hits in the game. Pinch-hitter Josh Cribb earned the win by pitching 7.2 innings, allowing four hits, two runs, and one walk with seven strikeouts. After allowing a solo home run by Bryan Thomas in the second inning, Cribb retired the next 14 Hokies. Clemson did not commit an error as well.

In game two, Smith hit two home runs with five RBIs in Clemson’s 11-4 win over Virginia on April 29. Smith hit a two-run homer in the fourth inning and a three-run long ball in the seventh inning. D’Alessio followed Smith’s second homer with a solo home run, while Colvin was 2-for-2 with a two-run double in the fifth inning that put the Tigers ahead for good. The Hokies out-hit the Tigers 10-9, but they walked seven batters to Clemson’s one. Jason Berken did not walk a batter and struck out six in 5.0 innings pitched to earn the win, while P.J. Zocchi and Steve Richard did not allow a run in the final 4.0 innings to close out the game.

In game three, Clemson scored seven runs in the first four innings and held on for a 7-3 victory over Virginia Tech on April 30 to finish off the series sweep. D’Alessio went 2-for-3 with three RBIs and two stolen bases, while Storrer hit a solo home run in the first inning and finished the day 2-for-2 with two RBIs. Clemson, who had 10 hits, stole four bases and left just four runners on base, while the Hokies stranded 11 baserunners. David Kopp allowed two runs on seven hits with six strikeouts in 6.0 innings pitched to earn the victory.