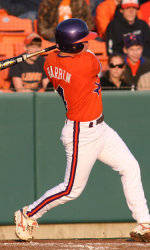 The Series Clemson and Auburn have met 87 times, with Auburn holding a 45-39-3 lead in the series dating back to 1901. Ironically, the legendary John Heisman, who was also a football coach on the Plains, coached his first two games as Clemson’s head baseball coach against Auburn (both victories) in the 1901 season. He also defeated Auburn in 1903 and was 3-0 against the Tigers from Alabama.

Despite the six-game lead for Auburn, Clemson has won 14 of the last 20 meetings, but Auburn took two of three games at Clemson in 2004. Auburn lead the series 26-15-3 in games played at Auburn, even though the ACC Tigers have won seven of the last 11 games at Plainsman Park.

The two have played a three-game series every year since 2002. The Tigers, behind the trio of Khalil Greene, Jeff Baker, and Doug Kingsmore Stadium in 2002 on their way to the College World Series. In 2003, Clemson started and ended its season at Plainsman Park, as it opened the year with a three-game series at Auburn and concluded its season with a loss to the Tigers in the Auburn Regional. The two teams are not scheduled to meet in 2006.

The Starting Pitchers In game one, Auburn will start senior lefthander Arnold Hughey (2-1, 4.79 ERA) on the mound. The Venice, FL native has started four games for a total of 20.2 innings pitched, and has allowed 21 hits and just three walks while striking out 14. He is 2-0 against Clemson the past two years, as he has combined to pitch 12.1 innings, allowing 11 hits, four runs, and four walks while striking out seven.

The Tigers will counter with junior righthander Josh Cribb (1-0, 2.19 ERA) on the mound Friday. The Lake View, SC native earned the win against West Virginia in the season-opener on February 18 and earned a no decision against #18 UC Irvine on February 25. Cribb has allowed just two walks while striking out 12 in 12.1 innings pitched this year.

In game two, Auburn will send out junior righthander Josh Sullivan (1-1, 2.74 ERA). The Little Rock, AR native has allowed just 17 hits and four walks while striking out 18 in 23.0 innings pitched over four starts. He also has a .198 opponents’ batting average and has yet to allow a home run in 2005.

Clemson will counter with junior lefty Robert Rohrbaugh (0-0, 2.70 ERA) Saturday. The Littlestown, PA native has yet to be involved in a decision in two starts this year, but has allowed just three runs on nine hits in 10.0 innings pitched during two starts.

In game three, Auburn will start sophomore lefthander Josh Blake (1-1, 6.48 ERA). The Olathe, KS native pitched 3.0 innings in a short start against South Alabama on Tuesday, as he allowed just one run on one hit. In three appearances (two starts) this season, he has allowed seven hits and five walks against five strikeouts in 8.1 innings pitched.

The Tigers will start junior righthander Kris Harvey (1-1, 6.75 ERA) Sunday. The Catawba, NC native evened his record thanks to a career-high-tying seven-strikeout performance against #18 UC Irvine on Sunday. Harvey has struck out 11 and walked only one in 9.1 innings pitched in 2005.

Auburn Overview Auburn is led by first-year Head Coach Tom Slater and enters the series with a 10-4 record despite losing its last two games. On Tuesday, South Alabama blanked the Tigers 3-0 at Plainsman Park, and Elon split two games at Auburn on Friday and Saturday. Earlier this year, Auburn went 1-2 at #14 Florida State.

The pitching staff has a 2.83 ERA thanks to a very effective bullpen. John Madden and Jared Shore both have 10 appearances through 14 games. Madden has a 0.46 ERA and two saves in 19.2 innings pitched, while Shore has a 1.23 ERA and has yet to allow a walk in 22.0 innings pitched. Michael Nix leads the team with three saves. The staff has also been good with control, as it has allowed just 30 walks in 127.1 innings pitched.

Clemson Overview Clemson enters the series at Auburn fresh off a three-game sweep of #18 UC Irvine last weekend, including two one-run victories. The Tigers, who are 1-2 away from home this year, enter the series with a 4-2 record, along with a .247 team batting average and 3.78 team ERA.

The team is led in hitting by freshman second baseman Kris Harvey has been the team’s top run-producer so far, as he has two homers and seven RBIs.

The pitching staff has a .254 opponents’ batting average and 55 strikeouts against only 18 walks, better than a 3-to-1 strikeout-to-walk ratio. Clemson is fielding at a .971 clip and has allowed just three stolen bases in nine attempts as well.

Tigers Sweep #18 UC Irvine Clemson swept #18 UC Irvine in a three-game series at Doug Kingsmore Stadium from February 25-27. The Tigers outscored the Anteaters 18-8 and outhit them .289 to .235 in the series. Clemson was aided by nine Anteater errors in the series, while the Tigers committed just two. Tiger pitchers combined for a 2.67 ERA and 30 strikeouts in 27.0 innings pitched. Kris Harvey had a solid series, as he picked up a win in a starting role, and added two homers and six RBIs at the plate.

In game one, Clemson scored a run on two errors on one play in the eighth inning to propel the team to a 3-2 win on February 25. Pitcher Nash Robertson’s throw to second base on an attempted sacrifice bunt was errant, and another throwing error on the same play allowed Josh Cribb, who did not factor in the decision, struck out a career-high eight batters in 6.1 innings pitched. Alta Loma, CA native Daniel Moskos, whose hometown is just 50 miles from Irvine, CA, earned the win by retiring the only batter he faced in the eighth inning. Stephen Clyne picked up his first career save by striking out the side in the ninth inning. Tyler Colvin and Adrian Casanova paced the Tigers with two hits apiece.

In game two, Tyler Colvin game-winning RBI on a fielder’s choice in the ninth inning propelled Clemson to a 5-4 win on February 26. The Tigers led 4-2 after eight innings, but the Anteaters had a two-out rally in the ninth inning to tie the score. Harbin’s one-out, bloop double in the ninth inning was key to the Tigers’ win. He was later on third with the bases loaded, and scored on Colvin’s groundout that the Anteaters could not turn into a double play. The throwing error on the play was their fourth of the game and eighth of the series. Freshman Stan Widmann had a career-high three hits, while Harvey added the first homer by a Tiger in 2005, a solo shot in the eighth inning. Drew Fiorenza picked up his first career win in relief.

In game three, the Tigers scored 10 runs in the first three innings and cruised to a 10-2 win on February 27. Eleven different Tigers had at least one hit in Clemson’s season-high 13-hit attack. Harvey earned the win by pitching 5.2 innings, and allowing two runs, six hits, and one walk while striking out seven. He also had four RBIs, including a three-run homer. Harbin and Herman Demmink were both 2-for-2, while Harbin hit his sixth double. Clemson had six hits with runners in scoring position after totaling just seven in its first five games. UC Irvine stranded 12 runners on base, including five in the first two innings without scoring a run.

Harbin Has Impressive Debut Freshman infielder Taylor Harbin was the Tigers top hitter in the season-opening tourney at Myrtle Beach and continued to shine against #18 UC Irvine. In six games, he is 10-for-23 (.435) with six doubles, a triple, and three steals, while he has not committed an error in 23 chances in the field. The Travelers Rest, SC native has had at least one extra-base hit in each of the six games, and has had at least two hits in four games.

Casanova Keeping Runners at Bay Junior transfer Adrian Casanova (Miami, FL) is in his first year with the Tiger program, but has already made his presence felt behind the plate. He has yet to commit an error in 59 chances, as he has started all six games there. He is hitting .235, but his worth has been keeping runners from stealing bases. Casanova has thrown out four of seven basestealers, while opponents have stolen just three of nine bases on the Tigers this year.

Clyne Emerging as Closer Sophomore righthander Stephen Clyne (Parkland, FL) is in his third year in the Tiger program, but he had not made an appearance on the mound until this season. He red-shirted in 2003 and missed all of 2004 with an arm injury.

In mop-up duty against East Carolina, who defeated the Tigers 10-0 on February 19, he pitched 2.1 perfect innings, while striking out three. Then against #18 UC Irvine on February 25, he entered the game in the ninth inning with the Tigers ahead a run and promptly struck out the side to earn his first career save. In 3.1 innings pitched this year, he has retired all 10 batters that he has faced, including six on strikeouts.