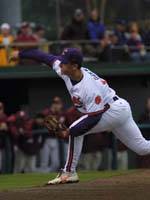 Baseball To Take on Chanticleers

Clemson vs. Coastal Carolina Clemson (25-9), ranked as high as #15, will play host to Coastal Carolina (26-9) in a two-game series at Doug Kingsmore Stadium beginning Tuesday at 7:15 PM. The second game will take place Wednesday at 7:00 PM. It was previously scheduled for a 4:00 PM start but was changed to accomodate the television coverage. Tuesday’s game will be broadcast live on the radio by Clemson Tiger Sports Properties and can be heard live via the internet at www.clemsontigers.com. Wednesday’s game will be broadcast live by WCCP out of Clemson and will be televised live by Comcast/Charter Southeast. Live stats will also be available for both games on Clemson’s website.

Tiger Head Coach David Slevin is 4-for-8 in his career against the team from Conway, SC and the Big South Conference. Catcher Steve Pyzik is 3-for-7 (.429), while Kyle Frank each have three RBIs in their careers against the Chanticleers.

The Starting Pitchers Senior righthander Brian Waack (2-1, 1.89 ERA) will start Tuesday for the Chanticleers. Waack has yet to make a start this year, but has made 20 relief appearances and has a team-best ERA mark. He has struck out 57 against only 14 walks in 47.2 innings pitched. Junior righthander Steven Carter (7-1, 4.50 ERA) will start on Wednesday. Carter has made 10 starts and has 65 strikeouts against only 16 walks in 62.0 innings pitched this year. Coastal Carolina has a 3.47 team ERA and .246 opponents’ batting average. The staff also has a 2.46 strikeout-to-walk ratio.

Clemson will counter with two freshman righthanders in the series. Jason Berken (4-1, 2.61 ERA), who has made five starts and four relief appearances this year, will start Tuesday. Berken earned the victory over South Carolina in his last start (Wednesday). Kris Harvey (2-0, 6.84 ERA) will take to the mound Wednesday. Harvey has made four starts and five relief appearances this season. Neither Berken nor Harvey has allowed a homer in a combined 56.0 innings pitched this year. Clemson sports a 3.73 team ERA and .246 opponents’ batting average.

Coastal Carolina Overview Coastal Carolina enters the weekday series with a .288 team batting average and a .401 on-base percentage. The team has stole an incredible 110 bases while only allowing 17 steals on defense. Ryan McGraw (30), Brett Grandstrand (28), and Brandon Powell (16) lead the Chanticleer base stealers. Powell also leads the team with a .362 batting average. Jeff Baker has a team-high nine homers, while Grandstrand has a team-best 32 RBIs. Coastal Carolina also has an outstanding .973 fielding percentage, committing only 37 errors in 35 games. The Chanticleers are coming off two wins in three games over the weekend against Elon. Earlier in the season, the team, which is 7-5 on the road, played three games at Pepperdine and three at Hawaii, totaling a 3-2 record during the trip.

Clemson Overview Clemson enters the series after falling twice in three games at #2 Florida State over the weekend. In the two losses, Clemson was just 1-for-25 with runners on base. Clemson is hitting .312 as a team, led by Russell Triplett’s .355 mark. Brad McCann has a team-best 40 RBIs as well. The Tigers have a .972 fielding percentage, committing just 38 errors in 34 games. The Tigers will put their 18-1 home record on the line in the series.

Seminoles Take Series Over Tigers Clemson won the first of a three-game series at Tallahassee, but the #2 Seminoles responded with two wins to take the series from April 11-13. Florida native David Slevin easily led all Tiger hitters with seven hits in the three games. Both teams hit .278, however the Seminoles had more timely hits. In the Tigers’ two losses, they were 1-for-25 with runners on base, including 0-for-8 with runners in scoring position.

In game one, David Slevin, and Steve Pyzik all had three hits apiece, as Pyzik had a team-best three RBIs in his first start in weeks. Jeff Hahn pitched 2.0 scoreless innings to close out the victory.

In game two, the Tiger bats went silence in key situations in Florida State’s 7-2 win. Clemson was just 1-for-18 with runners on base after being 7-for-17 with the bases empty. Patrick Hogan suffered the loss.

In game three, Florida State blitzed Clemson 8-1 behind 12 Seminole hits, including five from the last two spots in the batting order. Slevin had three of the Tigers’ six hits in the game. Head Coach Mike Martin went into eighth place in NCAA history in career wins (1,272) as well. Lefty starter Daniel Davidson pitched 7.0 shutout innings and tied a career high with seven strikeouts to earn the win, while Tiger starter Steven Jackson suffered the loss, his first since his season-opening start at Auburn.

Pitchers Dominating at Home In 19 home games this season, the Tiger hurlers have combined for a 2.44 team ERA to lead Clemson to a 18-1 record. In 170.0 innings pitched, Clemson has allowed just 46 earned runs, 52 walks, and 135 hits while striking out 140. The pitchers have combined to hold opponents to a .218 batting average as well.

Tigers Near Perfect at Home Clemson has a 18-1 record at Doug Kingsmore Stadium this season, which has helped Clemson climb in the polls. The .947 winning percentage is one of the best marks by a Clemson team in Doug Kingsmore Stadium’s existence, ranking fourth all-time at Clemson. The Tigers first played their home games there in 1970, therefore it is in its 34th season as the home of Tiger baseball.

Slevin Gets Seven in Florida Senior second baseman was one of the bright spots in Clemson’s series at #2 Florida State from April 11-13. The Port Saint Lucie, FL native was 7-for-12 (.583) in the three games to raise his season average to .308. Slevin, who has batted near the bottom of the lineup all season, also leads the team in batting average (.467) in ACC games. He has also not committed an error in 48 chances in eight ACC games this year.