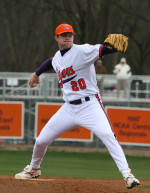 Baseball to Host Furman at 4:00 PM on Wednesday

Clemson vs. Furman Clemson (5-7) will play host to Furman (7-8) Wednesday afternoon at Doug Kingsmore Stadium. First pitch is scheduled for 4:00 PM. The game was originally scheduled for 7:15 PM, but the threat of inclement weather forced the change. The game will be broadcast live on the radio by WCCP (104.9 FM) out of Clemson. Live stats will be available online at ClemsonTigers.com as well.

The Series Clemson and Furman have met 190 times on the diamond, with the Tigers holding a 131-55-4 advantage dating back to the 1896 season. Clemson’s first two games in school history were against the Paladins, both losses in 1896, which were the Tigers’ only games that season. The two teams have played at least one game every year since 1983.

The two teams last played in 2004, as the Tigers were victorious 16-5 on May 11 thanks to six runs in the seventh and five runs in the eighth inning. The Paladins broke a 29-game losing streak by winning both games in 2003.

The Starting Pitchers Furman will start junior righthander Case Cassedy (1-0, 1.50 ERA) on the mound Wednesday. The Tallahassee, FL native has made two starts for a total of 6.0 innings pitched. He has allowed five hits and five walks while striking out three.

The Tigers will counter with sophomore righthander Stephen Faris (0-0, 1.00 ERA) on the mound. The Richmond, VA native has made four relief appearances for a total of 9.0 innings pitched. He has allowed just seven hits (all singles) and one run.

Furman Overview Furman, led by 12th-year Head Coach Ron Smith, enters Wednesday’s game with a 7-8 record after losing twice in three games to East Tennessee State over the weekend. The Paladins are 3-3 in the Southern Conference and 1-1 in away games.

The Paladin pitching staff has a 5.57 team ERA and .292 opponents’ batting average. David Mitchell has all of the team’s three saves along with a 1.64 ERA in 10 relief appearances. The staff has struck out 118 against 54 walks, good for a 2.19 strikeout-to-walk ratio.

Clemson Overview Clemson enters the game against Furman with a 5-7 record after falling twice to #4 South Carolina over the weekend by a combined four runs. The team, which is 3-2 at home, is hitting .281 overall and is led by sophomore Tyler Colvin, who is hitting .405, including 12-for-23 (.522) in the last six games. Travelers Rest, SC native and freshman Taylor Harbin has 20 hits, including 11 for extra bases, in the first 12 games and is hitting .385. The team is fielding at a .974 clip as well, committing just 12 errors through 12 games in 2005. The pitching staff has a 4.67 ERA and .297 opponents’ batting average. Stephen Clyne has the team’s lone save.

Gamecocks Outlast Tigers Twice South Carolina won both games of the home-and-home series over the Tigers on March 12,13. Clemson outhit South Carolina .310 to .284, but the Gamecocks outscored the Tigers 12-8. Six Tigers had at least three hits in the two-game series, including four by Taylor Harbin.

Brendan Winn’s two-run homer in the sixth inning led #4 South Carolina to a 6-3 win in front of 5,617 fans at Doug Kingsmore Stadium on March 12. The Gamecocks added two more runs in the seventh before Travis Storrer homered to cut the lead to 6-3. Starter Aaron Rawl earned the win for South Carolina, while Jason Fletcher earned the save. Tiger starter Josh Cribb suffered his first loss of 2005. Harbin, Kris Harvey, and Stan Widmann each had two hits to contribute for six of the team’s nine hits. Winn was one of five Gamecocks with two hits, as he added a game-high three RBIs.

The following day in Columbia, South Carolina scored three runs in the eighth inning after a costly Tiger error to defeat Clemson 6-5 at Sarge Frye Field on March 13. The Tigers took a 5-3 lead in the seventh inning thanks to a two-run double by Storrer and RBI single by Tyler Colvin, but the Gamecocks capitalized on two Tiger miscues in the eighth. With one out and a runner on first base, reliever David Kopp’s throw to first base on a ground ball was errant, allowing a run to score and the tying run to advance to third base. It was the first error by a Tiger pitcher in 2005. Michael Campbell tied the score with an RBI triple, and a “miscommunication” double to right-center by Winn proved to be the difference. Clemson outhit South Carolina 13-7 and was led by Colvin’s three hits. Harbin added his first homer as a Tiger and was one of three other Tigers with two hits. Harvey pitched a career-high-tying 7.0 innings, allowing just two earned runs on four hits, but did not factor in the decision.

Starting with Wednesday’s game against Furman, Clemson willplay 34 games during a 47-day span leading up to exams, meaning theteam will play on 72 percent of the days during that stretch.Starting next week, the Tigers will play a five-game week for sixconsecutive weeks. Clemson is scheduled to play only 29 home gamesthis year, the fewest since 1985 when the Tigers played just 25 athome. Clemson is 4-2 when it steals at least one base and 1-5 whenit does not swipe any bases. Clemson is hitting better away fromhome (.298) than at home (.255) this season. Tyler Colvin ishitting a blistering .600 (12-for-20) in six games away from home.* Clemson is 5-for-9 (.556) with a homer and 12 RBIs with the basesloaded this season, which includes a grand slam by Andy D’Alessio.Clemson’s righthanded batters are hitting .304, while the team’slefthanded batters are hitting .257. Clemson has picked off eightbaserunners, including five by pitchers. Josh Cribb has picked offthree, while Robert Rohrbaugh has two. Only one time has a Tigerbeen picked off this year. Freshman shortstop Stan Widmann ishitting .393 (11-for-28) in the last eight games after going1-for-12 in the first four games. Lefthanded batter Tyler Colvin is5-for-7 (.714) against lefties this year. Taylor Harbin already haseight multi-hit games, four more than the next closest Tiger. Healso has struck out just twice in 52 at-bats. Right-fielder TravisStorrer has thrown out two runners at the plate in the last threegames. Freshmen lead the team in both at-bats and appearances, asTaylor Harbin has 52 at-bats, and lefty Daniel Moskos has madeseven appearances.