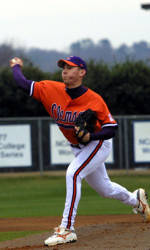 Clemson vs. Duke Clemson (15-13, 6-3 ACC), who is in fifth place in the ACC standings, will play host to Duke (9-23, 1-11 ACC) this weekend in a three-game series at Doug Kingsmore Stadium. Game times are 7:15 PM (Friday), 7:00 PM (Saturday), and 2:00 PM (Sunday). All three games will be broadcast live on the radio by Clemson Tiger Sports Network and can be heard live via the internet at ClemsonTigers.com. Live stats will also be available on Clemson’s website for all three games.

The Series Clemson and Duke have met 166 times on the diamond, with the Tigers holding a 105-60-1 lead in the series dating back to the 1904 season. Last year at Duke and two years ago at Clemson, the Tigers took two of three games, while the Blue Devils beat Clemson 7-4 in the 2003 ACC Tournament. Prior to 2003, Clemson had won 10 games in a row in the series.

The Starting Pitchers Duke will start senior righthander Greg Burke (4-4, 5.02 ERA) on the mound Friday. The Bellmawr, NJ native has made a team-high 12 starts for a total of 61.0 innings pitched. He has allowed 78 hits and 24 walks while striking out 52.

The Tigers will counter with junior righty Kris Harvey (2-0, 0.33) in game one Friday. The Catawba, NC native has made seven starts for a total of 38.2 innings pitched. He has allowed 40 hits and 14 walks while striking out 33.

Duke will send out freshman lefty Jimmy Gallagher (0-1, 4.50 ERA) Saturday. The Venetia, PA native, who also is hitting .213 in 80 at-bats as an outfielder, has made five relief appearances for a total of 8.0 innings pitched. He has yielded nine hits and five walks while striking out eight.

The Tigers will start junior lefthander Robert Rohrbaugh (3-1, 3.93 ERA) in game two. The Littlestown, PA native has made six starts and two relief appearances for a total of 34.1 innings pitched. He has allowed 36 hits and 17 walks while striking out 27. In three ACC starts, he is 3-0 with a 2.33 ERA as well.

The Blue Devils will start sophomore righthander Danny Otero (3-7, 4.61 ERA) Sunday. The Coral Gables, FL native has made 10 starts and one relief appearance for a total of 56.2 innings pitched. He has allowed 67 hits and seven walks while striking out 35, good for a 5-to-1 strikeout-to-walk ratio.

Clemson will send out junior righty Josh Cribb (2-4, 3.67 ERA) on the mound in game three. The Lake View, SC is the Tigers’ regular Friday starter, but he pitched 1.1 innings in relief at Georiga on Tuesday, therefore was moved to Sunday. He has made seven starts and one relief appearance for a total of 41.2 innings pitched. He has yielded 53 hits and 10 walks while striking out 41.

The Blue Devils Duke, led by sixth-year Head Coach Bill Hillier, enters this weekend’s series with a 9-23 overall record and 1-11 ACC mark. The Blue Devils have not played since being swept at Wake Forest last weekend. All three games in Winston-Salem were one-run games. Duke is 0-8 on the road as well.

The Blue Devils are hitting .272 as a team, led by freshman Brett Bartles, who is hitting .360 with a team-high 20 RBIs. Adam Murray is hitting .358 with 10 doubles, and Eric Baumann leads Duke with three home runs. Duke is also fielding at a .954 clip. Duke has a 6.18 team ERA and .309 opponents’ batting average. The staff has struck out 208 against 118 walks in 282.1 innings pitched. Tony Bajoczky has a team-high three saves.

The Tigers Clemson enters this weekend’s series against Duke with a 15-13 overall record and 6-3 ACC mark after losing both midweek games against Georgia. The Tigers, whose last seven losses have been by a combined 10 runs, are 8-4 at home this season.

Clemson is hitting .290 overall and is led by freshman Kris Harvey leads the club with six homers and 29 RBIs. Clemson is also fielding at a .974 clip.

The pitching staff has been solid of late, as its ERA has fallen to 3.41 and opponents’ batting average to .258. The staff also has a 2.3 strikeout-to-walk ratio. Stephen Faris has been a stopper out of the bullpen, as he leads the ACC with an 0.50 ERA in 36.1 innings pitched. He has allowed just 19 hits and 13 walks while striking out 34.

Tigers #25 in Unofficial RPI Clemson is #25 in the latest RPI listing at WarrenNolan.com, which includes games through April 5. The Tigers, who are 15-13, have a top-25 rating thanks to a rugged schedule, which is the second-toughest in the country.

And Clemson’s RPI could be much better. The RPI does not take into account margin of victory/defeat, nor does it take into account, unlike NCAA basketball, site. Clemson, who is 10-7 in its last 17 games, has lost those seven games by a combined 10 runs. Meanwhile, it has won the 10 games by a combined 68 runs. On the season, Clemson is 3-7 in one-run games, and lost another two-run decision. The Tigers average margin of defeat this year is just 2.7 runs per game, while their average margin of victory is 6.3 runs per game.

Clemson has played a remarkable 21 of its 28 games against teams in the top 50 of the RPI. And the Tigers have played 16 of their first 28 games away from home, including 14 games on opponents’ home fields. The Tigers are also 8-5 against top-25 ranked teams, and have lost those five games by a combined eight runs, while winning the eight games by a combined 42 runs.

Tigers Off to Impressive Start in the ACC Clemson has a 6-3 ACC, good for fifth place. But the Tigers have already played North Carolina and Florida State, who are both top-10 teams. The Tigers also have lost their three ACC games by a combined four runs, while they have won their six games by a combined 41 runs.

Freshmen Up the Middle Many coaches will say that you must be strong “up the middle” to have a successful team. Well, Clemson has relied upon three true freshmen at those three positions this year, and the three have held their own. Taylor Harbin (2B), Stan Widmann (SS), and Brad Chalk (CF), all top-35 freshmen in the nation in the preseason according to Baseball America, have shown flashes of outstanding defense in the field. Harbin has not committed an error in 121 chances at second base. Widmann has committed 10 errors, but his .928 fielding percentage is respectable for a freshman shortstop. Both Harbin and Widmann have started every game at their respective positions. And Chalk has made 38 putouts and two assists without an error, as he had shown tremendous range in centerfield. The three are big reasons the team has a .974 fielding percentage, ahead of the single-season school record of .971 (2002).

The trio has also been impressive at the plate. Harbin is hitting .377 with 30 runs scored, 16 doubles, four homers, and 25 RBIs. He leads the ACC in doubles per game as well. Widmann is hitting .290 after struggling early in the season, and Chalk is hitting .349. Therefore the three have combined to hit .339 (94-for-277) this year.

Ben Hall That name instantly brings memories of a Tiger rumbling into the endzone at South Carolina in 2003, but this Ben Hall has made his presence felt on the diamond in limited action. The junior second baseman from Ormond Beach, FL is hitting .412 (7-for-17) with two doubles, a triple, and a home run in 14 games off the bench. He is 6-for-12 as a pinch-hitter, while the rest of the Tigers have combined for just nine hits in 49 at-bats in a pinch-hitting role.

Perhaps the highlight of his young Tiger career came in the field in the first game of a doubleheader at Maryland on March 26. With the bases loaded and two outs in the 10th inning, Dan Melvin lined what appeared to be the game-winning, walkoff single to right field. But Hall, all of 5’10”, leaped and speared the liner at second base to keep the Tigers alive. Clemson went on to win 6-4 in 13 innings. The win was a landmark one, as it was Head Coach Jack Leggett’s 900th of his career. Then in the second game of the doubleheader, he came off the bench and hit two doubles late in Clemson’s 12-0 victory.