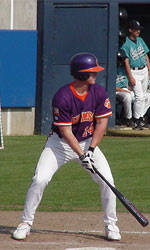 CLEMSON, SC – Matt Henrie was strong on the mound and Khalil Greene and Jeff Hourigan homered to lead Clemson to a 13-1 victory over South Alabama on Friday night. Clemson moved to 13-0 on the year while dropping South Alabama to 11-8.

Henrie (3-0) was dominant through the first seven innings, allowing only two hits. He pitched 7 and 1/3 innings total, allowing five hits and one run while striking out three to earn win for the Tigers. Mel Spivey (0-3) got the loss for South Alabama.

Clemson opened the scoring in the fourth. Kyle Frank led off with a double in the gap and Khalil Greene followed with a base hit through the left side to plate Frank.

Jeff Hourigan hit his second home run of the year to start the Tiger rally in the fifth inning. Clemson added a pair of runs with two outs in the frame. Steve Pyzik and David Slevin singled up the middle when Frank came to the plate. He ripped a single to left that scored Pyzik and Slevin came around to score when Jaguar left fielder Ryan Mulhern misplayed the ball.

The offensive continued in the sixth. Jeff Baker led off the inning with a single to right and scored was followed by a double to center by Michael Johnson. Johnson moved to third on a fly out and then scored on a wild pitch.

South Alabama’s only threat came in the eighth inning. The Jags scored a run and then loaded the bases with one out. Tiger Head Coach Thomas Boozer struck out the only batter he faced. Closer Paul Harrleson faced the next batter and induced a groundout to get the Tigers out of a jam.

Clemson piled it on in the eighth inning. Baker scored on a wild pitch, Hourigan hit a two-RBI double and pinch hitter Collin Mahoney singled in a run. Greene stepped to the plate with two runners on and hit a line-drive home run to right, his fifth of the year, to give his team a 13-1 lead. It was the third straight game Greene homered for the Tigers.

Greene went 2-4 with four RBIs and Hourigan knocked in three runs while hitting 2-4 to lead the attack.

The teams will square off on Saturday at 4:00 PM at Doug Kingsmore Stadium.