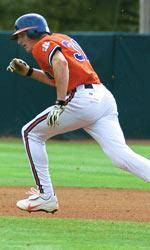 The 2003 Clemson baseball team has been ranked 18th by Collegiate Baseball and 19th by Baseball America in each organization’s preseason poll. The Tigers are coming off a College World Series season in which they finished 54-17.

Head Coach Jack Leggett’s squad will be led by senior first baseman Michael Johnson. The second-round draft pick in 2002 was named a preseason second-team All-American by both Baseball America and Collegiate Baseball after batting .384 with 25 home runs and 81 RBIs in 2002.