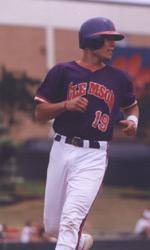 Clemson churned out 26 hits and four different Tigers hit home runs in a 23-5 victory over UNC Asheville on Tuesday night. Jack Leggett’s squad improved to 15-1 while dropping UNC Asheville to 4-7.

Eleven different Tigers had hits and nine had at least two hits. Jeff Baker broke out of a slump by batting 3-6 with six RBIs. Patrick Hogan (1-0) got the win for the Tigers by pitching three innings, allowing two runs. Hogan even prevented a Bulldog hit up the middle by kicking the ball to catcher Collin Mahoney, who threw the runner out at first.

UNC Asheville scored two runs in the top of the first. Consecutive singles by Jake McGonia, Denver Edick and Bill Carley were followed by a Grant Rembert single later in the inning to give the Bulldogs an early 2-0 advantage.

In the bottom of the inning, Clemson grabbed a lead it would not relinquish. Singles by L.J. DeMaino and Kyle Frank led off the inning. Khalil Greene followed with a fly ball deep to right field that fell for a single and scored DeMaino. Michael Johnson hit a three-run home run to give Clemson a 4-2 lead.

The runs continued to roll in during the second inning. Frank’s bloop single scored Jeff Baker plated Frank and Greene. The Tigers scored one more run off a Bulldog error to take an 8-2 lead after two innings.

UNC Asheville scored an unearned run in the third inning and put up two more in the fifth with Edick’s two-run home run to cut the deficit to 8-5. Mahoney provided some fireworks for the Tigers in the bottom of the fifth inning with a towering blast that cleared the 40-foot high batters’ eye behind the 400-foot sign in center field. Frank singled in DeMaino later in the inning to give the Tigers a 10-5 lead.

Clemson scored three more runs in the sixth inning off of Baker’s solo home run and a two-run shot by Jeff Hourigan. Baker homered again in the seventh, this time a three-run shot, and Hourigan hit an RBI-double. The Tigers added two more runs off a Bulldog error to make it a six-run inning.

Clemson will next face Maine for the first of a three-game series on Thursday at 7:15 PM at Doug Kingsmore Stadium.