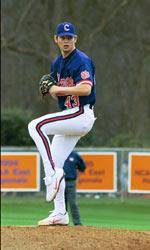 Clemson tied a season low with six hits but found enough offense to defeat NC State Friday night at Doug Kingsmore Stadium. The Tigers improved their record to 26-1 (4-0 ACC) to tie the 1977 squad for the best start in school history. NC State dropped to 20-12 (1-6 ACC).

Steve Reba moved to 8-0 on the season and earned his 12th straight victory for the Tigers. The senior went seven innings and allowed only two runs and two hits while walking four and striking out six in 110 pitches. Derek McKee (2-2) threw 119 pitches in a strong outing but got the loss for the Wolfpack.

Reba got out of a jam in the second after NC State put runners at the corners with two out. The pitcher faked a throw to third and wheeled around to first base to pickoff State’s Joe Gaetti and end the inning.

The Tigers jumped out on top in the bottom of the second when Kyle Frank sent a 3-2 pitch deep to right for his third home run of the season to give Clemson a 2-0 advantage.

The Tigers scored another run in the fourth off of a Wolfpack error. Johnson and Jeff Hourigan walked to put runners at first and second with two out. Russell Triplett hit a chopper to shortstop that was misplayed by NC State’s Chad Orvella and allowed Johnson to score.

NC State finally broke through in the sixth inning. Brian Wright reached on a two-out walk and then David Hicks hit a line drive home run to make it a 3-2 ballgame.

Clemson padded its lead in the seventh with three runs. Kyle Frank and walked him after making the count full. Khalil Greene knocked in a run with a sacrifice fly and Jeff Baker walked to load the bases again. After another full count, Davidson walked Johnson to plate another run before getting out of the inning with a double play.

The Wolfpack added two runs in the top of the eighth off of Tiger reliever Jeff Hourigan came in to pitch and recorded the last out of the eighth. Closer Paul Harrerlson entered the ninth with one runner aboard but got three straight outs to earn his sixth save.

The two teams will square off Saturday at 4:00 PM.