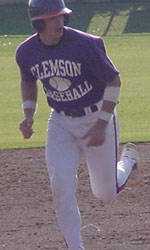 CLEMSON, SC – The Orange took two of three games from the Purple as the Clemson baseball team completed its preseason preparations for the 2002 season with an intrasquad series this weekend. The Tigers will open the season Feb. 22 at 3:00 PM against Auburn.

Game one on Friday was a defensive affair highlighted by B.J. LaMura’s one-hit performance over six innings as the Orange defeated the Purple 4-0. Jarrod Schmidt homered and David Slevin had two hits to lead the victors. Khalil Greene hit two home runs and Collin Mahoney drove in three runs to lead the Orange to a 10-8 victory in 11 innings in game two. Ryan Childs yielded one run in six innings and Kyle Frank went 2-4 with a home run and four RBIs to lead the Purple.

Sunday’s game three saw a barrage of long balls on a blustery afternoon in Doug Kingsmore Stadium. Jeff Baker, Chad Coder, Ryan Klosterman, Robert Valiente, Slevin and Schmidt all blasted home runs in another offensive battle. The Purple scored two runs in the top of the ninth and Paul Harrelson closed the game to give the Purple a 10-9 victory. Coder and Greene led the Orange with four RBIs a piece for the series while Frank and Baker drove in five RBIs each for the Purple.

Season tickets for the 2002 Clemson baseball season are available and can be purchased by calling 1-800-CLEMSON.