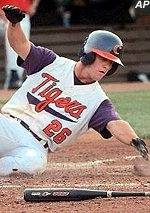 The captains were selected by a vote of the team prior to the season which gets underway Friday with a three-game series against Richmond. The games will start at 3:00 PM on Friday, at 2:00 PM on Saturday and at 1:00 PM on Sunday. The Saturday games will be broadcast by both WGOG-FM (96.3) in Walhalla and by WCSZ-AM (1070) in Greenville. Sunday’s game will by broadcast solely by WCSZ-AM.

Clemson is coming off its 15th consecutive 40-win season and its 14th consecutive NCAA Tournament. The Tigers finished 51-18 a year ago after the school’s ninth appearance in the College World Series. In this week’s polls, Clemson is ranked 13th by Baseball America, fifth by Collegiate Baseball and eighth by Baseball Weekly/ESPN.