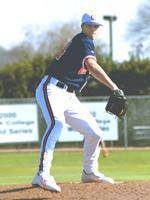 Clemson vs. Virginia Clemson (18-10, 6-0 ACC), winners of nine games in a row, will travel to Charlottesville, VA to play at Virginia (26-7, 8-4 ACC), winners of six games in a row, this weekend in a three-game series at UVa Baseball Stadium. Game times are 7:00 PM (Friday), 7:00 PM (Saturday), and 1:00 PM (Sunday). All three games will be broadcast live on the radio by the Clemson Tiger Sports Network and can be heard live via the internet at ClemsonTigers.com. Live stats will also be available on Clemson’s website for all three games.

The Series Clemson and Virginia have met 125 times, with the Tigers holding a 98-27 lead in the series dating back to the 1955 season. Last year at Clemson, the Tigers won two of three games. Two years ago at Charlottesville, VA, Clemson swept the Cavaliers.

Tiger Head Coach Jack Leggett is 27-7 against the Cavaliers as Clemson’s head coach, including a 12-3 mark at UVa Baseball Stadium.

The Starting Pitchers In game one, Virginia will start junior lefthander Andrew Dobies (5-0, 1.96 ERA). The Wexford, PA native has started eight games and has two complete games to his credit. In 55.0 innings pitched, he has allowed just 44 hits and 13 walks while striking out 57.

The Tigers will counter with junior lefty Tyler Lumsden (2-1, 4.25 ERA) Friday. The Roanoke, VA native has started five games and has pitched 29.2 innings. Lumsden has allowed 29 hits and 10 walks while striking out 30.

In game two, the Cavaliers will start sophomore righthander Matt Avery (3-1, 2.79 ERA). The McLean, VA native has started seven games and relieved in two other games. In 42.0 innings pitched, he has allowed 45 hits and 19 walks while striking out 27 batters. He has also allowed just one home run.

In game three, Virginia will start senior lefty Joe Koshansky (5-1, 2.82 ERA). The Fairfax, VA native is also a regular in the field at first base. In eight starts on the mound (51.0 innings pitched), he has allowed just 38 hits and 16 walks while striking out 40.

Clemson will start sophomore lefthander Robert Rohrbaugh (2-1, 2.88 ERA) either Saturday or Sunday. The Littlestown, PA native is coming off back-to-back wins in his last two starts, including a career-high 8.0 innings pitched against Maryland on April 4. In 25.0 innings pitched, he has allowed 23 hits and five walks while striking out 13. He has also not allowed a home run in 54.2 career innings pitched.

Virginia Overview Virginia, led by first-year Head Coach Brian O’Connor, enters this weekend’s series on a six-game winning streak, 26-7 overall record, and 8-4 ACC record (third place). Virginia won at William & Mary Tuesday by a score of 11-9 while totaling only five hits. A four-run ninth inning overcame a two-run deficit. The Cavaliers, who are 12-4 at home this year, also swept Duke at Durham, NC this past weekend.

Virginia is hitting .299 as a team, led by Ryan Zimmerman’s .348 batting average. Joe Koshansky (10) and Mark Reynolds (7) have combined to hit 17 of the team’s 18 home runs, while Koshansky leads the team with 44 RBIs. The Cavaliers have stolen 63 bases in 79 attempts, including 15 by Matt Street and 11 by Reynolds. They have also tallied 27 sacrifice bunts, including 10 by Scott Headd.

The Cavalier pitching staff sports a 3.21 ERA. Along with its effective starting weekend rotation, freshman lefthander Casey Lambert has been key to Virginia’s success. Lambert has four saves in 14 relief appearances and a 1.75 ERA. The staff is holding opponents to a .265 batting average and only 12 steals in 21 attempts. The Cavalier defense has also been outstanding, fielding at a .976 clip.

Clemson Overview Clemson enters the Virginia series on a nine-game winning streak after a 9-4 victory over #6 South Carolina Wednesday at Doug Kingsmore Stadium. The Tigers, who are 4-5 on opponents’ home fields, are hitting .358 during the winning streak. The Tigers’ 6-0 ACC mark is best in the conference, as every other league team has at least two losses.

Clemson is hitting .311 overall, led by Brad McCann’s .415 batting average. The junior third baseman from Duluth, GA has hit eight homers and driven in 31 runs. Lou Santangelo has nine homers and is hitting .349. Kris Harvey, who is also 5-0 on the mound this year, is hitting .481 with 13 RBIs in six ACC games.

The Tiger pitching staff has a 3.97 ERA and .248 opponents’ batting average. Clemson also has a .964 fielding percentage.

Tigers Rally to Down #6 South Carolina Clemson scored the last eight runs of the game to defeat #6 South Carolina on April 7 at Doug Kingsmore Stadium. The bottom four Tigers in their batting order combined for 11 hits and six runs scored to pace Clemson’s 16-hit attack. Andy D’Alessio, Russell Triplett, and Garrick Evans had three hits apiece, while Tony Sipp added two hits and two RBIs. Herman Demmink also added two hits and three RBIs, including a solo homer to lead off the game. Meanwhile, Josh Cribb pitched 5.0 masterful innings of relief to shut down the Gamecock bats. He allowed two hits, no runs, and no walks while striking out four to earn the victory. It was the Tigers’ ninth-straight win and first in three tries this season against the rival Gamecocks.

Tigers in Front of ACC Standings Thanks to sweeping its first two ACC series (over Wake Forest and Maryland), Clemson stands in first place in the ACC standings. The Tigers are 6-0, 0.5 games ahead of second-place North Carolina (7-2). Every ACC team except Clemson has lost at least two ACC games. Clemson will play at third-place Virginia (8-4) this weekend, who is one game behind the Tigers in the standings, this weekend. Clemson, who finished tied for third in the ACC regular-season standings in 2003, has not finished first in the regular season since 1995. For complete 2004 standings, see the bottom-right of page 5 in the notes.

Young Guns Clemson’s young pitching staff has been instrumental in the Tigers’ recent success. Sophomores Robert Rohrbaugh have evolved into reliable weekend starters, while sophomore righty Kris Harvey is 5-0 as well. Of Clemson’s 18 wins this year, 15 of them have been recorded by pitchers who are either freshmen or sophomores. Sophomores Berken (5), Harvey (5), Josh Cribb (2), and Rohrbaugh (2) have accounted for 14 of the wins, while freshman Stephen Faris has the other victory.

Tigers Hitting .358 in Nine-Game Win Streak Clemson has won nine games in a row entering its series against Virginia, thanks mostly to the hot bats of many Tigers. Clemson is hitting .358 during the streak thanks in part to 35 extra base hits. Four Tigers are hitting .410 or better during the win streak. Clemson is averaging 8.9 runs and 12.9 hits per game, while the pitching staff boasts a 2.67 ERA. The pitchers have also held opponents to a .236 batting average over that span.

Good Night Clemson is 8-1 in eight night games this year, including a 3-1 record on opponents’ home fields. The Tigers are hitting .335 at night, compared to their opponents hitting just .215 at night. Clemson’s ERA is also 2.62 at night, compared to its opponents’ 7.38 ERA. Sophomore righthander Jason Berken has not allowed an earned run in 19.0 innings pitched (three starts) at night in 2004.

McCann Has Hit Safely in 44 of Last 48 Games Junior third-baseman and preseason All-American Brad McCann’s ended the 2003 season on a 20-game hitting streak. The streak carried cover to the 2004 season, where he extended it by two games before it came to an end at East Carolina on February 28. During his 22-game hitting streak, the Duluth, GA native hit .410 (41-for-100) with 21 RBIs. Even though the streak ended, he leads the 2004 team with a .415 batting average. He also has hit safely in all but four games this year, meaning he has hit safely in 44 of his last 48 games.

McCann’s 22-game hitting streak tied for the fifth longest in Clemson history. The Tiger and ACC record-long hitting streak is 41 games, set by Rusty Adkins from April 10, 1965 to May 17, 1966. Adkins’ streak also started in one season and ended in the next.

Cribb Stifling Out of the Bullpen Sophomore righthander Josh Cribb (Florence, SC) came in the game against #6 South Carolina on April 7 and shut down the high-octane Gameocks. In 5.0 innings pitched, he allowed just two hits, no runs, and no walks while striking out four to earn the win. He lowered his season ERA to 0.87 in 20.2 innings pitched and eight relief appearances. He has also allowed just 12 hits (.164 opponents’ batting average) and one walk while striking out 19.