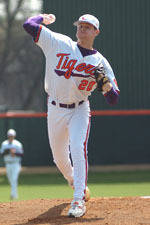 Clemson vs. Wofford Clemson (29-13), ranked as high as #9 in the nation, will play host to Wofford (17-27) on Wednesday at Doug Kingsmore Stadium. First pitch is scheduled for 7:15 PM. The game will be broadcast live on the radio by WCCP (104.9 FM) out of Clemson. Live stats will also be available at ClemsonTigers.com for the game.

The Starting Pitchers Wofford will start sophomore righthander Ben Austin (0-2, 10.36 ERA) on the mound Wednesday. The Chapel Hill, NC native has made three starts and six relief appearances (24.1 innings pitched). He has allowed 38 hits and 15 walks with five strikeouts.

The Tigers will counter with junior righthander Stephen Faris (4-2, 3.19 ERA) on the mound. The Richmond, VA native had made 10 starts for a total of 53.2 innings pitched. He has a .235 opponents’ batting average, allowing 46 hits and 12 walks with 44 strikeouts. Faris has never pitched against the Terriers.

The Series Clemson and Wofford have met 95 times on the diamond, with Clemson holding a 71-23-1 lead in the series dating back to 1898.

The two teams have played at least one game every year since 2001, including four of the last five years at Doug Kingsmore Stadium. The two also met in 1999 at Clemson. Prior to the 1999 game, the last meetings came in 1976 and 1977 at Spartanburg, both Tiger victories. On April 27, 2005 at Doug Kingsmore Stadium, Clemson beat Wofford 7-1 behind a grand slam by Andy D’Alessio.

Clemson holds a 35-8 lead in the series in games played at Clemson, including a 5-0 advantage at Doug Kingsmore Stadium. Head Coach Jack Leggett is 6-0 against Wofford as Clemson’s head coach and was 7-2 against the Terriers as the Western Carolina head coach, meaning he is 13-2 all-time against Wofford.

The Terriers Wofford, led by seventh-year Head Coach Steve Traylor, enters Wednesday’s game with a 17-27 overall record and 3-15 SoCon mark after getting swept at #19 College of Charleston over the weekend. Prior to winning its two previous games, the Terriers suffered a 16-game losing streak after starting the season 15-8.

Zach Pittman leads the team with a .319 batting average, while Shane Kirkley is hitting .318 with nine homers and 27 RBIs. John Brandt has a team-best 11 home runs and 32 RBIs.

The pitching staff has a 7.35 ERA and .320 opponents’ batting average. The Terriers have walked 201 batters with 225 strikeouts, while allowing 46 home runs. Freshman righty J.D. Melton has seven of the team’s eight saves.

The Tigers Clemson enters Wednesday’s game with a 29-13 overall record and 12-6 ACC mark after winning two of three games at Boston College this past weekend. Clemson allowed just six earned runs in the three-game series. Despite losing their last two home games, the Tigers are 20-5 at Doug Kingsmore Stadium this season.

The pitching staff has a 3.56 ERA and .253 opponents’ batting average. Lefty Daniel Moskos has seven of the team’s 13 saves. Clemson totaled just nine saves in all of 2005.

Polls Clemson dropped three spots to #9 in the Baseball America poll on Monday after a 2-3 week. The Tigers also fell to #12 in the Collegiate Baseball and #11 in the Sports Weekly poll.

Casanova on Top at Bottom Adrian Casanova, the #9 batter in the Tiger lineup, is hitting a team-best .321 in ACC regular-season games. In 18 conference games, he also has six doubles, two homers, and 13 RBIs. In all games this year, he is hitting .265. Casanova is currently riding a team-season-high 10-game hitting streak in ACC games.

The Miami, FL native’s average has risen with the temperature for the second-straight year. He hit .238 overall in 2005, but .316 with three homers and 21 RBIs in 30 ACC regular-season games.

Tigers One-Up Eagles in First-Ever Meetings Clemson, ranked #6 in the nation, won two of three games at Boston College on April 21,22 in the first-ever meetings between the two schools. On two cold and windy days, the Tigers outscored the Eagles 12-7 and out-hit them .245 to .237. Taylor Harbin went 5-for-11, while Marquez Smith added four hits and three RBIs. Clemson, who committed only two errors, also had a 2.08 ERA in the series, including no runs, six hits, and two walks allowed in 11.1 innings pitched by Tiger relievers.

In game one, Daniel Moskos pitched 1.1 scoreless innings to pick up the save. Clemson scored single runs in the second and fourth innings, then took a 4-1 lead with two runs in the sixth inning thanks to RBI doubles by Travis Storrer and Smith. Storrer was 2-for-2, while Smith had two hits and two RBIs. The Eagles stranded 10 runners on base, while Clemson had four sacrifice bunts.

In game two, righthander Terry Doyle stifled Clemson, allowing one earned run on four hits in 7.1 innings pitched in Boston College’s 3-2 win in the first game of a doubleheader on April 22. Clemson managed just four hits, while the Eagles had six. Boston College scored all three runs in the first two innings, while the Tigers scored a run in the fourth on a solo homer by Storrer. The Tigers scored another run in the fifth inning on one of three Eagle errors in the inning. David Kopp pitched 6.1 scoreless innings in relief of two-hit ball with eight strikeouts, but the Tigers were 0-for-11 with runners on base.

In game three, Jason Berken and Herman Demmink. Harbin had a game-high three hits for the Tigers, who totaled 11 hits in all.