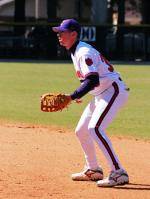 The Tigers will then travel directly to Columbia to take on South Carolina (10-0) Saturday at 1:30 PM. The game will be carrried by WCCP, 104.9 FM out of Clemson. The two teams will then matchup at Clemson on Sunday at 2:00 PM. The Sunday game will be broadcast live on the radio by Clemson Tiger Sports Network and can be heard live via the internet at www.clemsontigers.com. Live stats will also be available for both games against South Carolina on Clemson’s website.

Clemson won three of four games during the 2003 season, with Clemson splitting the two games in Columbia. South Carolina leads the series in games played at Columbia 67-62-2, even though the Tigers have won 10 of the last 14 games in the capital city.

The Starting Pitchers College of Charleston will start junior lefthander Reid Price (0-1, 4.35 ERA). The Fletcher, NC native has made one start and one relief appearance in 2004. He has struck out 12 and allowed just eight hits in 10.1 innings pitched.

Clemson will counter with sophomore righty Kris Harvey (1-0, 0.00 ERA). In his last start, Harvey threw 5.0 shutout innings, allowing just three hits in a victory over Georgia Southern. The Catawba, NC native has a win to his credit against the Cougars, as he picked up the decision last season.

South Carolina will start junior righthander Billy Buckner (2-0, 3.77 ERA) Saturday. The Conyers, GA native has struck out 18 and walked just one in 14.1 innings pitched this year.

Clemson will counter with sophomore righthander Jason Berken (1-0, 0.00 ERA) Saturday. The De Pere, WI native pitched 6.0 shutout innings against Georgia Southern last weekend in his only outing of 2004. He allowed just two hits and no walks while striking out seven Eagles.

College of Charleston Overview College of Charleston enters Friday’s game with a 6-3 record, including a win over Maryland. The Cougars have also played N.C. State twice, falling both times. The Cougars, who are 4-1 at home this year, are hitting .317 as a team, led by Brett Anderson’s .452 batting average, four homers, and 11 RBIs. He has four of the team’s six home runs as well. In just nine games, College of Charleston has stolen 29 bases. The pitching staff has a 4.00 ERA, while the team is fielding at a .936 clip.

South Carolina Overview South Carolina enters the game Saturday with a 10-0 record, including a 7-4 win over Furman Wednesday night. The Gamecocks are hitting .392 as a team and holding their opponents to a .159 batting average. They have also outscored their opponents 126-15. Brendan Winn leads the team with a .567 batting average, while he also has four homers and 17 RBIs. Steve Pearce is second with a .526 batting average, but he leads the squad with seven home runs and 22 RBIs. The Gamecock pitching staff has a 1.43 ERA. The staff has struck out 120 and allowed just 14 walks. Chad Blackwell has four saves and has yet to allow a hit, run, or walk while striking out 12 in 7.0 innings pitched. South Carolina also sports a spectacular .989 fielding percentage, as it has committed just four errors in 10 games.

Clemson Overview Clemson enters the weekend action with a 3-3 record after an 8-5 win over Gardner-Webb Saturday. Clemson is hitting .251 as a team, led by Brad McCann’s .462 batting average. Six different Tigers have accounted for the team’s seven homers, led by McCann’s two. Clemson also has a 2.77 ERA and a .970 fielding percentage.

Tigers Go Deep to Beat Gardner-Webb All eight of Clemson’s runs were driven in by the 7-8-9 hitters in the lineup, as the Tigers defeated Gardner-Webb 8-5 on March 3 at Doug Kingsmore Stadium. After Russell Triplett’s hit his first career grand slam, while Patrick Hogan earned his first save of the season.

Tigers Sporting a 2.77 Team ERA Despite the team’s 3-3 record, Clemson’s pitching staff has been impressive in the early going. Clemson has a 2.73 team ERA and is holding opponents to a .232 batting average. The staff also has 59 strikeouts against only 18 walks (3.28 ratio) and already has two team shutouts. Sophomores Kris Harvey and Jason Berken have been especially good, as he has yet to allow a run in 6.0 innings pitch.

Road Trip Including the ACC Tournament in May, Clemson will take to the road for eight of the 14 weekends in 2004. The Tigers brutal schedule includes weekend series/games at East Carolina, South Carolina, Texas Tech, Virginia, North Carolina, Georgia Tech, and Duke. Clemson is scheduled to play 32 regular-season home games and 24 games away from home in 2004.