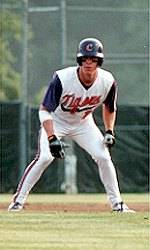 Both starters pitched effectively through the first five innings, but gave up runs in the sixth inning. Tiger starter Jarrod Schmidt allowed just one earned run and four hits in 5.1 innings, but did not factor in the decision. Matt Additon (1-0) picked up the win in relief and Nick Glaser pitched the final 2.0 innings to pick up his fourth save. Duke starter Chris Cochran (2-1) suffered the loss.

Clemson took an early 1-0 lead in the second inning. Michael Johnson hit a single up the middle and was brought home when Baker slapped an RBI double.

The score remained 1-0 until the top half of the sixth inning when the Dukes dented the scoreboard with two runs. After a Brent Metheny walk and a single by Jeremy Hays, Eric Bender hit what appeared to be a routine double-play ball to Clemson shortstop Baker. The ball was mishandled allowing the bases to load. Pat Cunningham followed with a single to left field, scoring Metheny, but Hays was thrown out at the plate by left fielder Casey Stone. Cunningham led the Dukes with three hits in three at bats. The Dukes added their second run when Bender scored on an RBI groundout by Greg Miller.

The Tiger bats revitalized in their half of the sixth inning when they took the lead for good. Patrick Boyd led off the inning with a double and Khalil Greene followed with a walk. After a double steal by the Tigers, Baker laced a two-run double down the left-field line, scoring Boyd and Greene. Baker advanced to third on a bunt single by Henr’ Stanley and scored on a passed ball by Dustin Bowman.

The Dukes added one more run in the eighth inning to cut the Tiger lead to 5-3. Hays was hit by pitch and scored on a single by pinch-hitter Mitch Rigsby. The Dukes threatened further, but Glaser picked off Miller and struck out pinch-hitter Eddie Kim.

Clemson will next play host to Coastal Carolina on Wednesday at 3:00 in its next action.