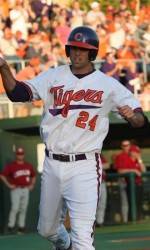 Clemson (26-8, 9-3 ACC), ranked as high as #5 in the country, will travel to Atlanta to take on #10 Georgia Tech (26-8, 8-7 ACC) in a three-game series at Russ Chandler Stadium this weekend. Game times are 7:00 PM (Friday), 1:00 (Saturday), and 1:00 (Sunday). The Saturday and Sunday games will be televised live by FSN South. The Saturday game is also designated as a Regional Sports Network telecast. All three games will be broadcast live on the radio by Clemson Tiger Sports Network. Live stats will be available at ClemsonTigers.com for all three games as well.

The Series Clemson and Georgia Tech have met 183 times on the diamond, with the series split at 90-90-3 dating back to the 1902 season. After the Tigers had won the last five games in the series prior to 2004, Georgia Tech won all four meetings in 2004, including a three-game sweep in Atlanta and a 11-7 win in 13 innings in the ACC Tournament at Salem, VA, and two of the three games at Doug Kingsmore Stadium in 2005. Therefore, Georgia Tech has won six of the last seven meetings.

The Starting Pitchers In game one, Georgia Tech will start 6’5″ junior righthander Blake Wood (6-3, 4.47 ERA) on the mound. The Suwanee, GA native has made nine starts for a total of 52.1 innings pitched. He has allowed 61 hits and 22 walks with 47 strikeouts on the season.

The Tigers will counter with senior righthander Josh Cribb (6-0, 1.98 ERA) on Friday. The Lake View, SC native has made seven starts and one relief appearance for a total of 41.0 innings pitched. He has allowed 28 hits (.196 opponents’ batting average) and 11 walks with 40 strikeouts. In game two, the Yellow Jackets will send out 6’5″ junior righty Jared Hyatt (2-0, 3.38 ERA) on the mound. The Marietta, GA native has made one start and nine relief appearances (26.2 innings pitched). He has yielded 20 hits (.204 opponents’ batting average) and 16 walks with 34 strikeouts.

The Tigers will counter with junior righthander Jason Berken (4-2, 1.69 ERA) on Saturday. The De Pere, WI native has made eight starts for a total of 42.2 innings pitched. He has allowed 39 hits and 19 walks with 41 strikeouts.

The pitching staff has a 4.41 ERA and .277 opponents’ batting average. It has also struck out 253 against 133 walks in 299.2 innings pitched. Tim Gustafson has a team-high four saves with a 3.45 ERA in 13 appearances (two starts). All three starters on the mound this weekend stand 6’5″ or taller as well.

The Tigers Clemson enters the weekend series with a 26-8 overall record and 9-3 ACC mark after winning two midweek games. The Tigers defeated Western Carolina 8-3 in Cullowhee on Tuesday, then beat #7 South Carolina 10-5 at home on Wednesday. Clemson is also coming off a three-game sweep of Maryland at Doug Kingsmore Stadium last weekend. The team brings a 6-5 road record, including a five-game winning streak, and a 12-3 record against top-25 ranked teams into the series at Georgia Tech.

The pitching staff has a 2.86 ERA and .241 opponents’ batting average. Lefty Daniel Moskos has a team-high five saves and a 1.26 ERA in 16 relief appearances.

Relief pitcher and senior righthander Drew Fiorenza is a native of Atlanta and is the lone Georgia native making the trip with the Tiger team to Georgia Tech this weekend. He played at Woodward Academy up until his senior year of high school.

Widmann Quietly Having Good Year at Plate Sophomore shortstop Stan Widmann (Hurst, TX) is quietly having a solid season at the plate. Like last year, he has come on during the second half of the regular season. He is hitting .319 overall, third-best on the team, along with eight steals in eight attempts. But he has been especially good in the last 18 games, where he is 24-for-62 (.387). He only has five doubles, one triple, no homers, and 10 RBIs, a reason for his quiet success, but has a .402 on-base percentage, a key stat to set the table for the top of the batting order. The #8 batter in the lineup has been instrumental in the Tigers winning 15 of their last 17 games.

Moskos Receives Bob Bradley Award Sophomore lefthander Daniel Moskos won the 2006 Bob Bradley Award for being the Tiger MVP of the four-game series with South Carolina, as Clemson won the regular-season series 3-1. He became the first hurler to win the award in the sixth year of its existence. In two relief appearances against the top-10 Gamecocks, he pitched 8.0 innings, allowing just two hits and one run.

Tigers in the Majors in 2006 Clemson had three former players in the Major Leagues when the 2006 season began in early April. All three were All-Americans at Clemson, including two who were the consensus college player-of-the-year their final seasons. Two have also switched teams since the end of last year.

Khalil Greene is in his third season as the regular shortstop of the San Diego Padres. Greene batted .250 in 121 games last season with a career-high 15 home runs and a career-high 70 RBIs. The home run total was a franchise record for a shortstop. Greene got the 2006 season off to a great start with a home run on opening Day.

Greene led Clemson to the College World Series in 2002 and a school-record-best third-place finish when he was the consensus national player-of-the-year. He was a unanimous All-American and ACC Player-of-the-Year, as he led the nation in hits, runs scored, total bases, and doubles. He batted an incredible .470 for the season with 27 home runs and 91 RBIs.

Kris Benson opened the 2006 season in the starting rotation with the Baltimore Orioles. It is his third Major League club since he broke into the Majors in 1999 with the Pittsburgh Pirates. The #1 draft choice of the entire college draft by Pittsburgh in 1996, Benson had a 10-8 record with the New York Mets last year when he had a 4.13 ERA. He also had a career-high 12 victories in 2004.

LeCroy teamed with Benson to help the Tigers to a fourth-place finish in the College World Series in 1996. He was Clemson’s first ever rookie-of-the-year in baseball in 1995 when he hit 15 home runs to set a Tiger record for a freshman. LeCroy hit 53 home runs in his career, third on Clemson’s career list. His 208 RBIs are currently seventh on the Tiger career list as well.

Tigers Top Gamecocks 10-5 to Win Season Series Every Tiger starter had at least one hit to lead #5 Clemson to a 10-5 win over #7 South Carolina at Doug Kingsmore Stadium on April 12. With the victory, the Tigers took the season series 3-1. Clemson took a 8-1 lead in the fourth inning and never looked back. Tyler Colvin two-run triple in the fourth inning were two of Clemson’s 12 hits in the game, including five for extra-base hits. Adrian Casanova added a solo homer, while Brad Chalk reached base four times. David Kopp earned the win by pitching 6.0 innings, allowing one run on five hits. Neither team committed an error as well.