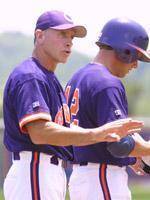 Clemson’s baseball recruiting class was ranked #12 in the nation by Collegiate Baseball Thursday. Louisiana State was ranked #1, while Arizona State, Texas, Oklahoma State, and Tulane rounded out the top five.

Head Coach Kevin O’Sullivan brought in 15 players, including eight high school players, five junior college transfers, and two college transfers. Drew Fiorenza was drafted in the 45th round by the New York Yankees, and was the lone draftee in the class. All 15 members of the class have already begun fall practice and are eligible to compete in the 2005 season, which will begin for the Tigers on February 18 in a tournament at Myrtle Beach, SC.