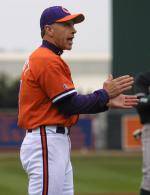 In the March 15 release, his RPI index has Clemson #19 despite the 6-7 record. The Tigers play arguably the toughest schedule in the nation in 2004. Clemson can thank a brutal non-conference schedule for its high RPI ranking. Clemson is actually ahead of Auburn (#26), despite the SEC Tigers 16-2 record and 2-1 series victorty over Clemson. The RPI only counts games against Division I teams and is for games through March 14.

* – head-to-head and through March 14; ^ – overall (against Division I teams only); Note: There are 287 schools that play Division I baseball.