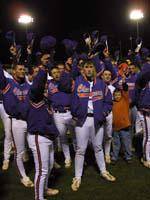 Clemson vs. Wake Forest Clemson (9-10, 0-0 ACC) will play host to Wake Forest (11-11, 1-2 ACC) this weekend at Doug Kingsmore Stadium. Game times are 7:15 PM (Friday), 4:00 PM (Saturday), and 2:00 PM (Sunday). It will be the first ACC series for the Tigers. All three games will be broadcast live on the radio by Clemson Tiger Sports Network and can be heard live via the internet at www.clemsontigers.com. Live stats will also be available on Clemson’s website for all three games.

The Series Clemson and Wake Forest have met 146 times on the baseball diamond, with the Tigers holding a 102-43-1 lead in the series dating back to the 1901 season. Last year, Clemson swept the Demon Deacons in Winston-Salem, NC to end the regular season. Two years ago, Clemson won two of three games at Doug Kingsmore Stadium. The Tigers also defeated the Demon Deacons 8-6 in the 2002 ACC Tournament, therefore has beaten them six times in a row.

The Starting Pitchers In game one, Wake Forest will start sophomore righthander Kyle Young (3-1, 4.03 ERA). The Southlake, TX native has started five games and pitched a total of 29.0 innings. He has allowed 35 hits and six walks while striking out 20.

Clemson will counter with sophomore righthander Jason Berken (3-1, 3.74 ERA) Friday. The De Pere, WI native has started four games and allowed just 15 hits in 21.2 innings pitched for a .192 opponents’ batting average. He also has 23 strikeouts. In game two, the Demon Deacons will send out junior righty Brian Bach (2-4, 4.33 ERA) to the mound. The Winston-Salem, NC native has started three games and appeared in four other games for a total of 27.0 innings pitched. He has allowed 32 hits and seven walks while striking out 16.

Clemson will counter with junior lefthander Tyler Lumsden (0-1, 5.51 ERA) Saturday. The Roanoke, VA native has started three games and allowed 18 hits in 16.1 innings pitched. He also has 18 strikeouts against only five walks. Lumsden has not pitched since March 13 (Auburn).

In game three, junior lefthander Tim Morley (2-1, 3.45 ERA) will start for the Demon Deacons. The Buffalo Grove, IL native has started five games and pitched a total of 28.2 innings. He has allowed 29 hits and seven walks while striking out 13.

Clemson’s starter for Sunday’s game has not yet been determined.

Wake Forest Overview Wake Forest, led by 16th-year Head Coach George Greer, enters this weekend’s series with an 11-11 overall record and 1-2 mark in ACC play. The Demon Deacons, who are 1-5 on opponents’ home fields in 2004, are coming off weekday losses at Davidson (11-9) and to UNC Greensboro (3-0). Last weekend, Georgia Tech won two of three games at Hooks Stadium in Winston-Salem, NC.

Ben Ingold leads the team with a .409 batting average. He also has committed just four errors and is a perfect 6-6 on stolen bases. Matt Antonelli is also hitting .360 with nine steals thanks in part to 18 walks. Wake Forest is hitting .306 as a team and has stolen 31 bases in 36 attempts. Only 11 Demon Deacons have more than four at-bats and only 10 have more than 24 at-bats in 2004. The team is fielding at a .969 clip as well.

The pitching staff sports a 5.80 ERA and .297 opponents’ batting average. Freshman reliever Lee Land has yet to allow a run in 10.1 innings pitched. The staff also has a 2.03 strikeout-to-walk ratio.

Clemson Overview Clemson enters its first ACC series with a 9-10 overall record after splitting a pair of midweek games with Elon. Clemson is the last ACC team to play a conference series, as all eight other teams have already played at least three ACC games.

The Tigers are hitting .288 as a team, led by Brad McCann’s .415 batting average. Lou Santangelo was 6-for-9 against Elon and has raised his average to .347. The Colts Neck, NJ native also has a team-high six home runs. Clemson has stolen 24 bases in 31 attempts and is fielding at a .965 clip.

The Tiger pitching staff has a 4.60 ERA and .253 opponents’ batting average. Josh Cribb has been the top Tiger out of the bullpen. He has allowed just two earned runs, seven hits, and one walk while striking out 11 in 12.2 innings pitched this year.

Tigers and Phoenix Split Midweek Games Clemson went 1-1 against visiting Elon from March 23-24 at Doug Kingsmore Stadium. Clemson outhit Elon .282 to .265 in the series and did not allow a stolen base against the speedy Phoenix.

In game one Tuesday, Clemson scored six runs in the fifth inning and three in the sixth inning to overcome a 5-1 deficit and defeat the Phoenix by a score of 10-6. Righthander Brad McCann’s also hit a homer and Tyler Colvin came off the bench to tally two hits and three RBIs. Clemson’s win broke a two-game losing streak to Elon.

Tigers Tough to Beat at Home Under Leggett In over 10 seasons, Head Coach Doug Kingsmore Stadium.

Even when an opposing ACC team is victorious at Clemson, it usually means that team only won one of three contests. In 40 ACC home series under Leggett, Clemson has lost only two series, losing two of three to N.C. State in 1996 and getting swept by Florida State in 2002. Georgia Tech also split a pair of games in a rain-shortened season in 1997.

Homers, Steals Up Clemson has hit 27 homers and stolen 24 bases in its first 19 games. After setting a school record with 112 home runs in 2002, Clemson’s long ball total dropped to 54 in 2003, an average of 0.89 per game. This year, Clemson is averaging 1.42 homers per game. Also, only 10 different Tigers hit home runs last season. Already this year, 10 different Clemson batters have hit long balls.