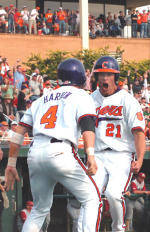 Overall, it was the 23rd time in history Clemson had defeated a number-one ranked team in all sports, the 10th time in baseball. Clemson has six wins over number-one in men’s soccer, two in men’s basketball, two in women’s basketball, two in men’s tennis and one in women’s soccer. The win in Columbia over the Gamecocks on April 5 was the 12th time in history Clemson had defeated the number-one ranked team on the road. The Tigers have six wins over number-one at home in all sports and five of the victories have taken place at neutral sites.

Clemson has now beaten the number-one team in baseball 10 times and five of the victories have been by one run, including the recent win over South Carolina in Columbia, a contest the Tigers won 3-2. In fact, 11 of the 23 Clemson wins over number-one have been by one point, run or goal.

With the victory over South Carolina on Wednesday, Clemson now has an 11-3 record against top 25 teams this year, including eight victories in the last nine. It was Jack Leggett’s 158th victory at Clemson over at top 25 team, his 83rd win over a top 10 team. It marked the 12th time in his career he had beaten a top 10 South Carolina team.