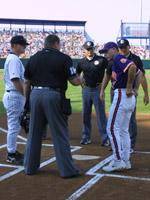 Clemson vs. South Carolina Clemson (17-10), ranked as high as #23, will play host to #6 South Carolina (23-5) Wednesday at Doug Kingsmore Stadium. First pitch is scheduled for 7:15 PM. The game will be broadcast live on the radio by the Clemson Tiger Sports Network and can be heard live via the internet at ClemsonTigers.com. Live stats will also be available on Clemson’s website. The game, which has been designated a Solid Orange & One Clemson Night, will be televised live by Comcast/Charter Sports Southeast as well.

During the 2003-2004 season, selected men’s and women’s basketball, men’s soccer and baseball games, an additional fee will be applied to each game ticket sold for the designated One Clemson…Solid Orange event. The proceeds from the One Clemson event will be used for specific One Clemson academic efforts. The One Clemson concept recognizes the strength of unity in everything we do as a University. The One Clemson Fund supports the University’s academic goals that will further enhance the ability of Clemson University to make for a stronger South Carolina and nation.

Show your support and pride by attending each One Clemson…Solid Orange event for the 2004 season.

The Series Clemson and South Carolina have met 265 times on the baseball diamond, with Clemson holding a 155-108-2 lead in the series dating back to 1899. South Carolina is Clemson’s most-played rival in history.

The Starting Pitchers South Carolina will start junior righthander Zac McCamie (2-0, 2.29 ERA) Wednesday. The junior college transfer from Orlando, FL has made two starts and seven relief appearances this season. In 19.2 innings pitched, he has allowed just 14 hits and three walks while striking out 25. He is also holding opponents to a .194 batting average.

Clemson will counter with sophomore righthander Kris Harvey (5-0, 3.13 ERA) on the mound. The Catawba, NC native has struck out 31 and allowed 26 hits in 31.2 innings pitched in a team-high seven starts this year. Harvey has a 9-1 career record in two seasons as a Tiger.

South Carolina Overview South Carolina, led by eighth-year Head Coach Ray Tanner, enters Wednesday’s game with a 23-5 overall record and 4-5 SEC record after winning two of three games at Vanderbilt over the weekend. The Gamecocks, who are 5-3 on opponents’ home fields this year, have played their last seven games away from home.

The Gamecocks are used to getting off to fast starts, outscoring their opponents by a combined score of 104-16 in the first three innings. South Carolina is hitting .345 as a team, led by Steve Pearce’s .413 batting average, 12 homers, and 35 RBIs. Landon Powell and Davy Gregg are also both hitting .391. Michael Campbell has added 10 homers and 34 RBIs as well. The Gamecocks are averaging over nine runs per game, and have hit 54 homers and 80 doubles in just 28 games. The team also has a .417 on-base percentage and outstanding .980 fielding percentage thanks to committing just 20 errors in 28 games.

The Gamecock pitching staff sports a miniscual 2.63 ERA and .214 opponents’ batting average. Reliever Chad Blackwell has a 1.75 ERA and seven saves in 16 appearances out of the bullpen. The staff has an incredible 5.92 strikeout-to-walk ratio, striking out 296 against only 50 walks in 250.0 innings pitched. Every Gamecock hurler with at least 10.0 innings pitched has a 3.28 ERA or better as well.

Clemson Overview Clemson enters the third of four games against South Carolina with a 17-10 record after sweeping Maryland over the weekend. Clemson, who is 11-5 at Doug Kingsmore Stadium, is riding an eight-game winning streak as well. Clemson is hitting .351 with a 2.50 ERA during its eight-game winning streak. The Tigers’ 6-0 ACC mark is best in the conference, as every other league team has at least two losses.

Clemson is hitting .307 overall, led by Brad McCann’s .421 batting average. The junior third baseman from Duluth, GA has hit eight homers and driven in 30 runs. Lou Santangelo also has eight homers and is hitting .353. John Ingram is perhaps the hottest Tiger, as he has hit safely in 13 straight games, the longest streak by a Tiger in 2004. The red-shirt freshman is hitting .438 overall.

The Tiger pitching staff has a 3.97 ERA and .248 opponents’ batting average. Clemson also has a .964 fielding percentage.

Tigers Sweep Maryland Clemson outscored Maryland 20-6 from April 2-4 at Doug Kingsmore Stadium to sweep the Terrapins and maintain first place in the ACC standings. The Tigers hit .321 in the series (including 5-for-7 with the bases loaded) to Maryland’s .230 batting average. Freshman Doug Kingsmore Stadium.

In game one Friday, Jason Berken pitched 6.0 scoreless innings of three-hit ball, while Tony Sipp and Tony Sipp came in the seventh inning with the tying run on second base with no outs and struck out the side. Patrick Hogan then struck out three in 1.1 innings pitched to record his sixth save of the year. Chris Clem went the distance for the Terrapins, but was the hard-luck loser despite allowing just one earned run.

In game three Sunday, the Tigers finished off the series sweep with a 8-2 victory over the Terrapins. Brad McCann’s first career grand slam in the seventh inning broke the game open. Lou Santangelo then followed with a solo shot. Both homers were the eighth of the season for the respective players. Maryland committed five costly errors, as only two of Clemson’s eight runs were earned.

Young Guns Clemson’s young pitching staff has been instrumental in the Tigers’ recent success. Sophomores Kris Harvey is 5-0 as well. Of Clemson’s 17 wins this year, 14 of them have been recorded by pitchers who are either freshmen or sophomores. Sophomores Berken (5), Harvey (5), Rohrbaugh (2), and Josh Cribb (1) have accounted for 13 of the wins, while freshman Stephen Faris has the other victory.

Tigers Hitting .351 in Eight-Game Win Streak Clemson has won eight games in a row entering its game against South Carolina, thanks mostly to the hot bats of many Tigers. Clemson is hitting .351 during the streak thanks in part to 31 extra base hits. Four Tigers are hitting .400 or better during the win streak. Clemson is averaging 8.9 runs and 12.5 hits per game, while the pitching staff boasts a 2.50 ERA. The pitchers have also held opponents to a .235 batting average over that span.

Good Night Clemson is 7-1 in eight night games this year, including a 3-1 record on opponents’ home fields. The Tigers are hitting .326 at night, compared to their opponents hitting just .211 at night. Clemson’s ERA is also 2.45 at night, compared to its opponents’ 7.07 ERA. Sophomore righthander Jason Berken has not allowed an earned run in 19.0 innings pitched (three starts) at night in 2004.

Harvey Producing On Mound and At Plate Sophomore righthander Kris Harvey (Catawba, NC) was hampered most of last season with shoulder problems, but has regained the form in 2004 that made him a fifth-round draft pick out of high school. The son of former Major League pitcher Bryan Harvey has made a team-high seven starts and has a 5-0 record along with a 3.13 ERA. In 31.2 innings pitched (22.0 of which have come away from home), he has allowed just 26 hits while striking out 31. He was 4-1 in 2003 as a freshman, therefore is 9-1 in his two-year career as a Tiger.

He was also a thorn in the side of Georgia in two games from March 30-31. He pitched 7.0 innings, allowing just two runs while striking out seven to earn the win at Athens. Then the next day, he went 3-for-4 with three runs scored and three RBIs as the starting right fielder.

Harvey Named Co-ACC Player-of-the-Week Kris Harvey was named Co-ACC Player-of-the-Week (along with Georgia Tech’s Clifton Remole) when he hit .500 in five games from March 30 through April 4 in leading the Tigers to a 5-0 record. He was 9-for-18 with eight runs scored, two doubles, two homers, and nine RBIs in four games in the field. He also allowed just two runs in a career-high 7.0 innings pitched at Georgia to record the win in his only non-start in the field.

McMillon is in his sixth season in the Major Leagues. For his career, he has played in 217 games and has a lifetime average of .259 with 13 home runs. Last year, he batted .268 for the Athletics, including a .385 average as a pinch hitter. He led the American League in pinch hits, pinch-hit batting average, and pinch-hit doubles in 2003. McMillon played for the Tigers between 1991-93.

LeCroy had a strong season for the Twins last year, as he had a career-best 17 home runs and hit .287 overall in 107 games. He also had 64 RBIs and a .490 slugging percentage for a Twin team that made the playoffs. The 2004 season is his fifth year in the Major Leagues. He has 32 lifetime home runs and 120 RBIs. LeCroy played for the Tigers between 1995-97.

Greene is slated to be the starting shortstop for the San Diego Padres this year. He played in 20 games in the month of September last year and batted .215 in 65 at-bats. He had two home runs and six RBIs. Pete Gammons of ESPN has made Greene his preseason pick for National League Rookie-of-the-Year. Greene played for Clemson from 1999-02 and was the unanimous NCAA National Player-of-the-Year in 2002.

Benson is in his fifth year with the Pittsburgh Pirate organization. The #1 overall selection of the 1996 Major League Draft had an injury-plagued 2003 season when he had a 5-9 final record after a 2-0 start. He has a career record of 35-41 with a 4.27 ERA. He has 470 career strikeouts in 649.2 career innings pitched. Benson played for Clemson between 1994-96 and was the consensus NCAA National Player-of-the-Year in 1996.

Koch, the #4 overall pick of the 1996 Major League Draft, is in his sixth season in the Major Leagues, including his second with the Chicago White Sox. Koch became the first pitcher in Major League history to record at least 30 saves in each of his first four years. That included 44 saves in his rookie year. Last year, he had a 5-5 record with 11 saves. He has 155 career saves and a 27-22 overall record. Koch played for Clemson from 1994-96.