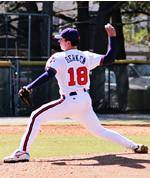 All of Clemson’s ACC Tournament games will be broadcast live on the radio by the Clemson Tiger Sports Network and can be heard live via the internet at ClemsonTigers.com. Live stats will also be available for all Tiger games on Clemson’s website.

The Series Clemson and North Carolina have met 159 times on the diamond, with the Tigers holding a 90-68-1 lead in the series dating back to the 1901 season. Earlier this year at Chapel Hill, the Tigers won two of three games. It will be the second year in a row the Tigers and Tar Heels will match up in the first round of the ACC Tournament. In that game last year, North Carolina defeated Clemson 10-2.

In the three games played from April 16-18, 2004, Clemson scored just six runs to North Carolina’s seven runs, but won by scores of 2-1 and 4-2 (in 10 innings). In that last game, Lou Santangelo hit the only homer by either team in the series in the 10th inning to lift the Tigers to the win. In the other win, Tyler Lumsden and Patrick Hogan combined to strike out 16 batters in game one. Clemson left just one on base, while North Carolina left 12.

The Starting Pitchers North Carolina’s starter has not been determined.

Clemson will start sophomore righthander Jason Berken (5-1, 1.90 ERA). The De Pere, WI native has started nine games and pitched a total of 42.2 innings. He has struck out 38 while walking 17 and is holding opponents to a .155 batting average.

The Tar Heels are hitting .292 as a team and have reached double digits in hits in just one of their last nine games. Marshall Hubbard is hitting a team-best .358 with 15 homers and 69 RBIs. Catcher Chris Iannetta is hitting .332 with 12 homers and 61 RBIs, while Sammy Hewitt has hit 11 home runs. The team has hit 62 long balls and stolen 51 bases. The team is also fielding at a .961 clip.

Iannetta has only allowed 22 steals in 44 attempts, while the pitching staff sports a 3.54 ERA and .241 opponents’ batting average. Closer Michael Gross has seven saves and a 2.41 ERA.

Clemson Overview Clemson enters the ACC Tournament off two wins in three games at Duke last weekend. Clemson is 34-22 overall and finished the ACC regular season with a 14-10 record. The Tigers are 2-0 in neutral-site games, both wins over Georgia Southern at Greenville, NC in February.

Brad McCann leads the team with a .374 batting average, 13 homers, and 56 RBIs. Freshman Andy D’Alessio is the hottest Tiger over the last month. He has raised his batting average to .345, including a team-best .371 average in ACC games. He is also riding a 10-game hitting streak. Another freshman, Tyler Colvin, was second on the team in average in ACC play with a .345 mark. Kris Harvey has a current 12-game hitting streak as well.

The Tiger pitching staff has a 4.17 ERA and .259 opponents’ batting average. Tiger pitchers allowed just three walks in the three-game series at Duke this past weekend. The Tigers’ fielding percentage stands at .961.

Tigers Take Series at Duke Clemson ended the regular season with two wins in three games at Duke from May 20-22. The Tigers ended the season with a 14-10 ACC mark, tied for fourth place with North Carolina in the standings. However, the Tigers will be the #4 seed because they won two of the three games with the Tar Heels. In the series, Clemson outscored Duke 20-9 and outhit the Blue Devils .241 to .189. Clemson walked 15 times, while Duke walked just three times. Russell Triplett was 5-for-12 (.417) with five RBIs, while Herman Demmink was 4-for-11 (.364) with a grand slam and six RBIs. Andy D’Alessio also was 3-for-8 (.375) with five walks and had .615 on-base percentage. D’Alessio extended his hitting streak to 10 games, while Kris Harvey upped his to 12 games. Meanwhile, nine Tiger hurlers combined for a 2.42 ERA and 20 strikeouts.

In game one Thursday, Demmink hit a grand slam and drove in a career-high five runs to lead the Tigers to a 10-1 win. Jason Berken returned and pitched 4.0 innings, as he was on a pitch count. Josh Cribb pitched 3.0 innings without allowing a hit, run or walk to earn the win. Harvey and Tony Sipp each had two hits along with Demmink to lead the Tigers’ 11-hit attack. Tyler Colvin added a two-run homer as well.

In game two, Duke got just two runners past first base, but both scored on Eric Baumann’s two-run homer in the fifth inning in the Blue Devils’ 2-1 win Friday. Clemson hit the ball hard to the outfield six times, but all six were caught, as it totaled just three hits off Zach Schreiber. He allowed one run while striking out seven in 8.1 innings pitched to earn the win, while Danny Otero picked up the save. Robert Rohrbaugh pitched the first complete game by a Tiger in 2004, but suffered the loss. In 8.0 innings pitched, he allowed just two runs, five hits, and one walk while striking out six. All three of Clemson’s hits came in the second inning, when Triplett’s infield single plated Harvey. Clemson also stranded six baserunners to the Blue Devils’ two. Duke’s win broke Clemson’s seven-game winning streak at Jack Coombs Field.

In game three, Clemson scored five runs in the third inning on its way to a 9-6 win Saturday. Harvey’s two-run single with the bases loaded finally got the Tigers on the board, then Triplett added another two-run single to give the Tigers the lead for good. Triplett was 3-for-5 with four RBIs and made a spectacular catch in foul territory. Clemson walked eight times, but stranded 13 to Duke’s five. Tyler Lumsden allowed three runs on five hits in 5.0 innings pitched to earn the win. Sipp struck out the side in the ninth inning to record his second save of the year. The win gave the Tigers their first series win in the last four weekends.

While Clemson has had unique success in the ACC Tournament, the Tigers will be looking for their first championship since 1994. That was Jack Leggett’s first year as Clemson’s head coach. Clemson defeated Florida State 4-1 in the championship game held in Greenville (SC) Municipal Stadium.

The Tigers have won the ACC Tournament with a perfect record five times. Clemson was 3-0 in 1976 and 1978 in winning both events at Clemson, then had a 4-0 record in winning the title in Raleigh in 1980. Clemson’s only other perfect run through the tournament came in 1991, when a Clemson team that won a record 60 games had a 5-0 mark in the ACC Tournament held in Greenville, SC.

This will be the second time the tournament has been held in the state of Virginia, as the 2003 tourney was also played at Salem, VA.

Clemson has a winning record against every other ACC team in tournament play with the exception of Florida State. Clemson is 7-10 against the Seminoles in the event. The Tigers are 8-3 against Duke, 11-7 versus Georgia Tech, 12-0 versus Maryland, 14-10 against North Carolina, 14-9 against N.C. State, 10-4 versus Virginia, and 11-4 versus Wake Forest. That computes to an 87-47 record and a .649 winning percentage. Only Florida State has a better winning percentage than Clemson in ACC Tournament play.

The success was reflected in the attendance. Each of the top eight ACC tournament crowds in history were held in Greenville, including the record 43,675 that attended the 1992 event.

The ACC Tournament began in 1973 and has been held every year but one since then. In 1979, Clemson won the regular-season title and was declared conference champion. The tournament was not held because of a scheduling conflict between school exam schedules and the tournament. Clemson has been the declared conference champion 13 times in its history, more than any other school.

Clemson #17 in Unofficial RPI The only rating system the NCAA uses to determine selections and seedings is the RPI, or the Ratings Percentage Index. Although the NCAA does not release its official RPI, Boyd Nation has come up with an RPI index that is all but the same as the official RPI. He uses numbers from previous seasons to verify his formulas.

In the May 24 release (listed at BoydsWorld.com), his RPI index has Clemson #17. The Tigers play one of the toughest schedules in the nation during the 2004 season. Clemson can thank a tough non-conference schedule for its high RPI ranking. Of the Tigers’ 56 games, 32 have been against teams ranked in the top 32 of the RPI. The Tigers also have 16 wins against teams in the top 50 of the RPI. The RPI only counts games against Division I teams and is for games through May 23.

Statistical Error Clemson’s fielding percentage of .961 has not been up to the standard of recent seasons, as the team has committed 85 errors in 56 games. But the fact that the Tigers commit an error has not necessary led to losses on the field. The team has committed zero or one error in 32 games this year. In those 32 games, the team is only 18-14 (.563). When Clemson commits two or more errors, the team is 16-8 (.667).

Freshmen Leading Team in ACC Play Freshman first baseman Andy D’Alessio (Naples, FL) and freshman outfielder Tyler Colvin (North Augusta, SC) have come on strong of late and were the top two Tiger hitters in ACC regular-season games. D’Alessio is hitting .409 (38-for-93) in his last 28 starts to raise his season average to .345, second-best on the team. He also led the team in ACC regular-season games with a .371 batting average. D’Alessio has also shown remarkable patience at the plate, walking 31 times in 148 at-bats, as his on-base percentage is a team-best .456. The .456 mark is also third-best in the ACC. He has hit safely in 17 of his last 18 starts and is riding a 10-game hitting streak. He is also hitting .524 against lefties as well.

Colvin is hitting .295 overall thanks to two four-hit games in May. He also hit .345 in ACC regular-season play, good for second on the club. He tied a school record with three doubles and went 4-for-5 against #24 Florida State on May 3. Then at #15 Georgia Tech on May 15, he went 4-for-4 with a double and his first career homer. Colvin has started 27 games in all, including 24 games in the outfield and three at first base.

Starting a Good Move for Rohrbaugh Sophomore lefthander Robert Rohrbaugh (Littlestown, PA) made his first start of 2004 and second career start at Texas Tech on March 21. Since then, he has been a weekend starter for the Tigers, starting against all eight league opponents. He only allowed 16 earned runs in 49.2 innings pitched and did not allow more than three earned runs in any of the eight ACC starts. In fact, he only allowed more than two earned runs in one of the ACC starts, that being three earned runs against #24 Florida State. He was also 3-4 and has a 2.90 ERA in ACC play.

Overall this year, he has made seven relief appearances and 10 starts. He is 4-5 with a 3.31 ERA. In 68.0 innings pitched, he has yielded just 17 walks and two homers to go along with a .253 opponents’ batting average. In 97.2 innings pitched over two seasons, he has a 3.23 ERA and has only allowed two home runs.