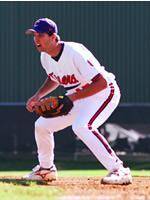 Clemson vs. Duke Clemson (32-21, 12-9 ACC) will travel to Durham, NC to play at Duke (23-27, 7-14 ACC) in a three-game series at Jack Coombs Field starting Thursday. Game times are 7:00 PM (Thursday), 2:00 PM (Friday), and 1:30 PM (Saturday). Friday’s game was originally scheduled for 5:00 PM but was changed Wednesday afternoon. The games will conclude Clemson’s 56-game, regular-season schedule. The Tigers will travel directly from Durham to Salem, VA for the 2004 ACC Tournament.

The Tigers will play in either the first game (10:00 AM) or last game (8:30 PM) of the day in the first round of the ACC Tournament on Wednesday, May 26. Clemson can be anywhere from the #3 to #6 seed, depending on the results from its series with Duke along with the results from the Florida State-at-Wake Forest series and N.C. State-at-North Carolina series this weekend.

All three games will be broadcast live on the radio by the Clemson Tiger Sports Network and can be heard live via the internet at ClemsonTigers.com. Live stats will also be available on Clemson’s website for all three games.

The Series Clemson and Duke have met 163 times on the diamond, with the Tigers holding a 103-59-1 lead in the series dating back to the 1904 season. Last year at Clemson, the Tigers took two of three games. Duke also defeated Clemson 7-4 in the 2003 ACC Tournament. Prior to the four games in 2003, Clemson had won 10 games in a row in the series, including winning all six games at Duke during the 2000 and 2002 seasons.

The Tigers hold a 40-24 lead over the Blue Devils all-time in games played at Duke. Clemson also holds a 79-29-1 advantage in games played in the ACC regular season. Tiger Head Coach Jack Leggett is 23-9 against Duke as Clemson’s head coach, including a 10-5 record at Jack Coombs Field.

The Starting Pitchers In game one, Duke is tentatively scheduled to start junior lefthander Tim Layden (5-4, 6.38 ERA) on the mound. The Deer Park, NY native has made 14 starts for a total of 66.1 innings pitched. One of those starts was a no-hitter that he tossed against Old Dominion on April 13. He has allowed 75 hits and 34 walks while striking out 73.

In game two, the Blue Devils are tentatively scheduled to start junior righty Greg Burke (5-6, 4.42 ERA). The Bellmawr, NJ native has started 10 games and relieved in eight others. He also has thrown two complete games and has two saves. In 75.1 innings pitched, he has allowed 82 hits and 19 walks while striking out 66.

In game three, Duke is tentatively scheduled to send out senior righthander Zach Schreiber (4-4, 4.75 ERA). The Cedar Rapids, IA native has made 13 starts and two relief appearances for a total of 77.2 innings pitched. He also has a complete game to his credit. Schreiber has allowed 89 hits and 28 walks while striking out 68.

Rohrbaugh (4-4, 3.45 ERA), a sophomore lefthander from Littlestown, PA, has made nine starts and seven relief appearances this season. In 60.0 innings pitched, he has allowed 58 hits and 16 walks while striking out 33.

Duke Overview Duke, led by fifth-year Head Coach Bill Hillier, enters the series with a 23-27 overall record and 7-13 ACC mark after being 6-6 in its first 12 conference games. The Blue Devils were swept by Florida State last weekend and have lost seven games in a row. The series will mark Duke’s first home games since April 25. The Blue Devils are 16-14 at home, including a 4-5 ACC record at Jack Coombs Field.

The Blue Devils are hitting .268 as a team, led by Javier Socorro’s .378 batting average. The sophomore outfielder from Miami, FL is second in the ACC (behind Brad McCann) in batting average. Tim Layden, who pitched a no-hitter against Old Dominion on April 13, has hit a team-high six homers, 45 RBIs, and a .328 average. He has also walked 43 times and has a .451 on-base percentage. Jonathan Anderson has a team-best 16 stolen bases as well.

The pitching staff sports a 4.80 ERA and .288 opponents’ batting average. Six different pitchers have accounted for the team’s 11 saves. The team has walked just 153 batters in 50 games is fielding at a .958 clip. Jon Smith, who was a catcher on four Clemson baseball teams (1999-02), is also an assistant coach on the Blue Devil staff.

Clemson Overview Clemson enters the series at Duke with three days off after being swept by #15 Georgia Tech last weekend. Clemson is 32-21 overall and 12-9 in ACC play. The 12-9 conference marks puts the Tigers in fifth place, one game behind both Florida State (13-8) and North Carolina (13-8). The Seminoles play at Wake Forest this weekend, while the Tar Heels play host to N.C. State. The Tigers are 7-12 on opponents’ home fields in 2004. Brad McCann leads the team with a .388 batting average, 13 homers, and 54 RBIs. He was named one of five National Players-of-the-Week last week by Collegiate Baseball. He was 8-for-10 with eight runs scored, two homers, and eight RBIs. McCann was hit by a pitch in his arm in the first inning at Georgia Tech Friday and did not play the rest of the series. His status is listed as day-to-day.

Freshman Andy D’Alessio is the hottest Tiger over the last month. He has raised his batting average to .343, including a team-best .371 average in ACC games. Another freshman, Tyler Colvin, is second in the team in average in ACC play with a .365 mark. The Tiger pitching staff has a 4.27 ERA and .262 opponents’ batting average. The Tigers’ fielding percentage stands at .961. After its series at Duke, the team will depart directly to Salem, VA for the ACC Tournament, which will begin Wednesday, May 26 for the Tigers.

Yellow Jackets Stay On a Roll With Sweep Georgia Tech ran its overall and ACC winning streaks to 13 games with a three-game sweep of Clemson in Atlanta from May 14-16. The Tigers were outscored 27-10 in the three games and only managed one run-scoring hit with runners in scoring position in 26 at-bats all weekend. Clemson also hit just .161 with two outs and committed nine errors and two passed balls in the series that led to nine unearned runs. Clemson hit .257 overall in the series. Freshmen Andy D’Alessio and Tyler Colvin were the top Tiger hitters, as both had five hits and a home run. Clemson hit five home runs in the series, but they accounted for just six of the team’s 10 runs.

In game one, Georgia Tech got 8.0 strong innings from Micah Owings to down the Tigers 8-3 Friday. Owings allowed two runs on four hits to earn the victory, as the Tigers totaled just seven hits in all. Brad McCann was hit by a pitch in the first inning and had to leave the game with a bruised arm. Andy D’Alessio led the Tigers with two hits, including a double. Steven Blackwood led Georgia Tech with three hits and two RBIs, while Brandon Boggs blasted a three-run homer. The win broke Clemson’s five-game winning streak in the series.

In game two, more effective starting pitching led to the Tigers’ demise. Andrew Kown allowed one run on six hits in 8.0 innings pitched in the Yellow Jackets 11-3 victory Saturday. Kown allowed one walk while striking out nine. The 5-8 hitters in Georgia Tech’s lineup had all eight of the team’s hits, including three by Clifton Remole and another long three-run home run by Boggs. Robert Rohrbaugh suffered the loss.

In game three, Georgia Tech completed the sweep with an 8-4 win Sunday. Two costly errors led to five runs for the Yellow Jackets, including three runs in the bottom of the seventh after the Tigers had cut the lead to 5-4 in the top of the seventh. Clemson scored a run in the first on one of Kris Harvey’s two doubles. But Georgia Tech scored four in the bottom of the first thanks to just one hit, an sloppy defense, and control problems on the mound. Down 5-1, Clemson chipped away at the lead thanks to solo, opposite-field homers by Santangelo and Garrick Evans. Senior Brian Burks earned the win, while Tyler Lumsden walked four and suffered the loss. Russell Triplett and Travis Storrer also had two hits along with Harvey’s run-scoring doubles.

Clemson #15 in Unofficial RPI The only rating system the NCAA uses to determine selections and seedings is the RPI, or the Ratings Percentage Index. Although the NCAA does not release its official RPI, Boyd Nation has come up with an RPI index that is all but the same as the official RPI. He uses numbers from previous seasons to verify his formulas.

In the May 17 release (listed at BoydsWorld.com), his RPI index has Clemson #15. The Tigers play one of the toughest schedules in the nation during the 2004 season. Clemson can thank a tough non-conference schedule for its high RPI ranking. Through the Tigers’ first 53 games, 32 have been against teams ranked in the top 31 of the RPI. The RPI only counts games against Division I teams and is for games through May 16.

McCann Goes 6-for-6, Named National POTW Brad McCann went 6-for-6 with a double, two homers, four runs scored, and six RBIs against a #27 ranked (Collegiate Baseball) College of Charleston club on May 12 at Doug Kingsmore Stadium. The six hits tied a Clemson single-game record, as he became the eighth Tiger in history and first since 1992 to accomplish the feat. One of his two home runs was a grand slam and came on an 0-2 pitch. No Tiger had even totaled five hits in a game in 2004 before the game against the Cougars.

Against Furman the night before, he went 2-for-4 with three runs scored, two RBIs, and two walks. Therefore in just over two games that week, he was 8-for-10 with eight runs scored, a double, two homers, eight RBIs, two walks, and a stolen base. He also reached base in 11 of his 13 plate appearances and was named one of five National Players-of-the-Week by Collegiate Baseball for his efforts. McCann was hit by a pitch in the first game at #15 Georgia Tech on May 14. After scoring on Lou Santangelo home run, he left the game with a bruised arm and did not play again in the series.

McCann Up For Golden Spikes, Dick Howser Junior third baseman Brad McCann was one of 30 college baseball players selected to the Golden Spikes Award Watch List, released April 7 by USA Baseball. As part of its continuing efforts to salute amateur baseball excellence, USA Baseball, in partnership with the Major League Baseball Players Association, presents the 2004 Golden Spikes Award. USA Baseball will announce its five finalists for the award in June.

On May 13, McCann was named one of 30 semifinalists for the 2004 Dick Howser Trophy, also given to the top collegiate baseball player. The winner will be announced at the College World Series on June 18. The trophy is given in memory of the former Florida State All-America shortstop and Major League manager who died of brain cancer in 1987.

McCann was also named a first-team junior All-American in Baseball America’s midseason report. It lists its top players by position and by class, and he was its pick at third base among juniors.

McCann leads the Tigers and the ACC with a .388 batting average, 13 homers, 17 doubles, and 54 RBIs in 51 games. Former Tiger shortstop Khalil Greene won both of the aforementioned awards in 2002.