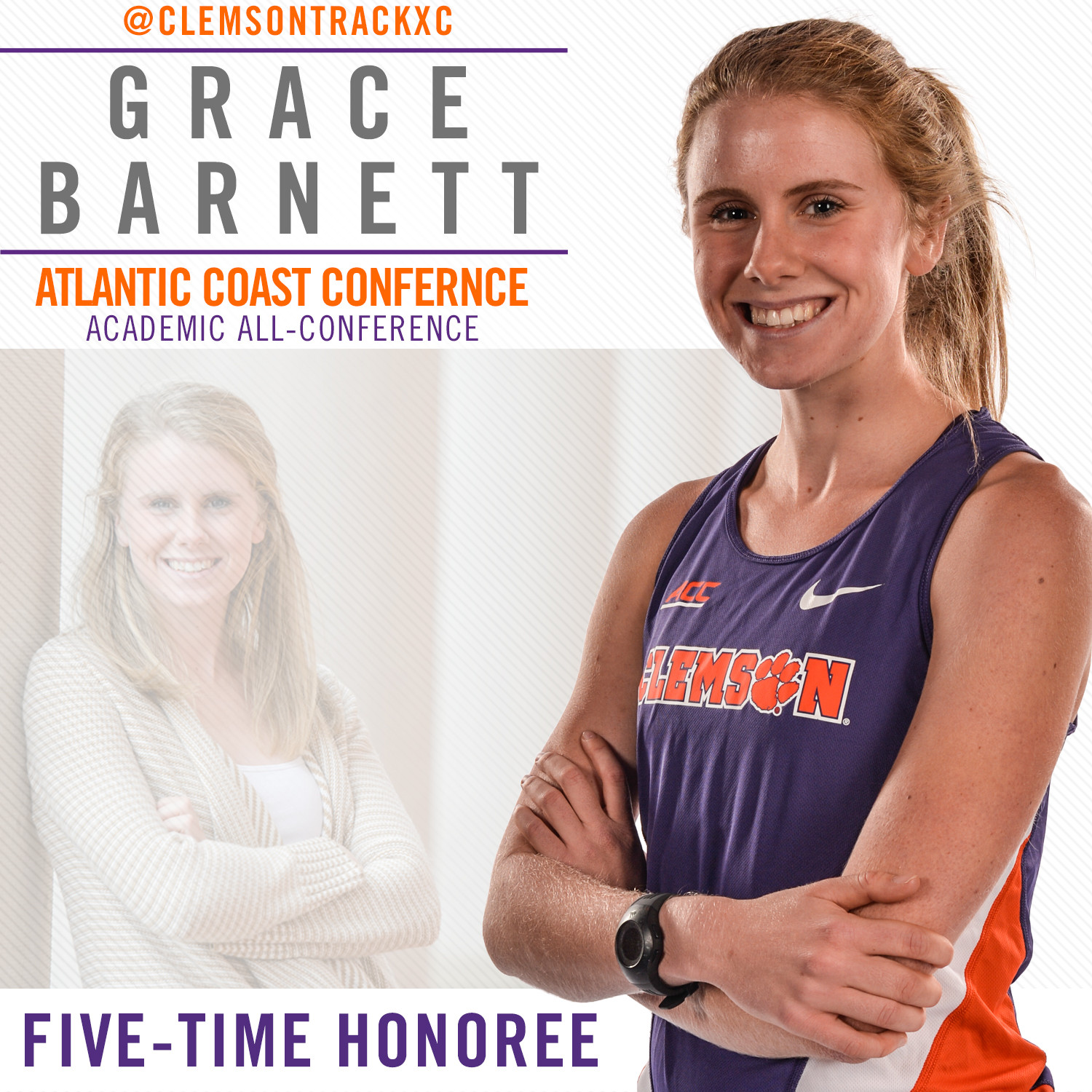 CLEMSON, S.C. – Sophomore distance runner, Grace Barnett has been selected to the 2016 All-ACC Academic Women’s Indoor Track & Field Team for the second time in her career. The honor is the fifth academic award of her career as she has been named to the All-ACC Academic Women’s Cross Country Team twice and to the outdoor track and field team once.

The award caps off an astounding indoor campaign following her All-ACC caliber cross country season. After walking onto the team, it only took Barnett until her redshirt sophomore season to earn status as one of the nation’s best milers in track and field, declaring herself as an All-American in the mile and the distance medley relay.

At the ACC Championship she kicked off Clemson’s effort by blowing away the competition on the final leg of the distance medley relay to claim gold by five seconds with a time of 11:08.09. She closed the championship meet with perhaps the gutsiest effort of the weekend by taking fifth in the mile after she was tripped in a battle for the lead with one lap to go. Then in a tight race with Miami for the ACC title, Barnett came back to score as a late addition in the 3,000 meter run with her fifth place performance.

The weekend prior to ACC’s, Barnett anchored the fastest distance medley relay time in program history at the UCS Invitational. The first place DMR team’s time of 11:00.44 shattered the Clemson indoor record by seven seconds and stood as the fourth fastest time in the country heading into NCAA’s.

Her record in the DMR was her second of the season as she also claimed Clemson’s indoor record in the mile when she ran the fastest mile by a Tiger in 30 years at the Charlie Thomas Invitational. Barnett’s time of 4:37.32 was a personal best by four seconds and was just .03-seconds off of the meet record.

Minimum academic requirements for selection to the All-ACC Academic Team are a 3.0 grade point average for the previous semester and a 3.0 cumulative average during one’s academic career. Athletic achievements during the most recent season are also considered in selecting the All-ACC Academic Team.  The 2015-16 All-ACC Women’s Indoor Track and Field Academic Team features 43 student-athletes that earned All-America and/or All-ACC honors this past season.