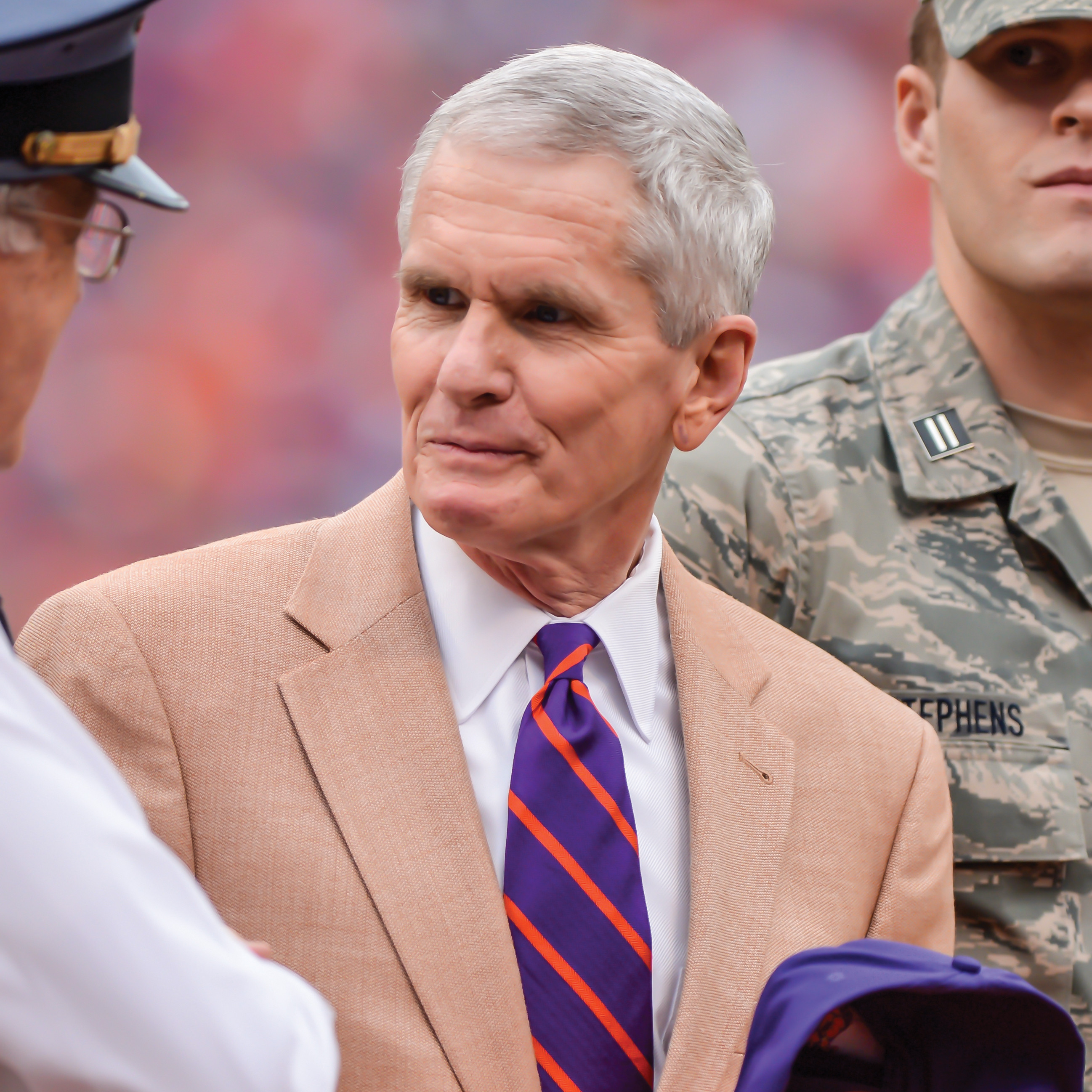 Former Tiger golfer Steve Bond and his wife, Margaret, had a vision to honor Clemson athletes who not only succeeded and lettered in their sport, but also employed life lessons to become successful role models in their community and career.

The Bonds created the Clemson Distinguished Athletes Award and presented it to Clemson athletics. The perpetual award includes a gold ring presented each year at the Homecoming football game. The honorees’ names are displayed on a permanent plaque in the lobby of Vickery Hall.

Barker competed in track & field from 1968-70 as a pole-vaulter. While most track athletes reported to practice in the afternoon, Barker spent time in the architect studio during practice and arrived as many of his teammates were leaving. Attempting to balance the rigors of school and athletics, Barker learned a crucial skill that applied in all aspects of life.

“It helped me understand how to make the most of every minute that you have,” said Barker. “Trying to be an architect and a part of a team was a challenge, but sooner or later it occurred to me that one was teaching me lessons for the other.

“The kind of focus I had to have as I was preparing to run down a runway and getting over a bar was the same kind of focus I needed to prepare a presentation for a group. I had to shut out everything else and focus on that.”

In high school, Barker was driven to break certain pole-vault heights, but once he arrived at Clemson, he knew he had to change his priorities. It was important to contribute to the track & field team, but Barker also knew the importance of maintaining his scholarship by immersing himself in his architecture studies.

Barker recounted a story that highlights the difficulty of being a student-athlete. After staying up for two days straight working on a project, he decided to attend practice before going to sleep.

“I pole-vaulted once and landed in the foam pit and thought to myself, ‘This is really comfortable.’ I fell asleep and woke up the next morning and was convinced I was dead. I was surrounded by all this white stuff and I couldn’t figure out where I was, and then I figured out what had happened. Those kind of experiences were good for becoming a faculty member and good for being president.”

As president of Clemson University, Barker continued to set goals, including the goal for Clemson to become a top-20 public university. It was an honor the university accomplished this past September. After hanging around the low 20s, Clemson passed the coveted threshold.

“It was like clearing 14’6” when we finally did it, maybe even more wonderful because it took 15 years to really make it happen,” stated Barker. “The truth is my role in it was the easy part. My role was to say that is the vision we should have. I knew Clemson was a better university than we were ranked at the time and I knew we could incrementally get better through discipline and focus, lessons learned on the track.”

As important as it was to crack the top 20, Barker admitted the most important aspect was to keep the traits that make the Clemson Family so strong. He would rather not achieve his goals if it meant compromising the Clemson brand, but as his track & field days taught him, it was possible through focus and dedication.

“We had trustees who would remind me once we got to the top 20, we wanted Clemson to still be Clemson. We didn’t want to sacrifice any of those qualities that make the Clemson Family so strong.

“That’s the most gratifying part, that Clemson is still Clemson, and yet here we are a top-20 public university. I feel really good about how we’ve become a more united university and strengthened all aspects of Clemson in the process.”

After a hard-fought battle with cancer, Steve Bond passed away in August 2013, just months before the inaugural award was presented to Bobby Conrad and Carolyn Creel. Margaret plans to carry out their vision by recognizing distinguished former athletes each year.

Barker has always been impressed by the Bonds’ dedication to his university.

“I’m very honored to be a part of that and the family whose name this award is crafted around,” added Barker. “The Bond family is just remarkable. I didn’t know him very well, but everything I learned about him and this concept was so impressive.”