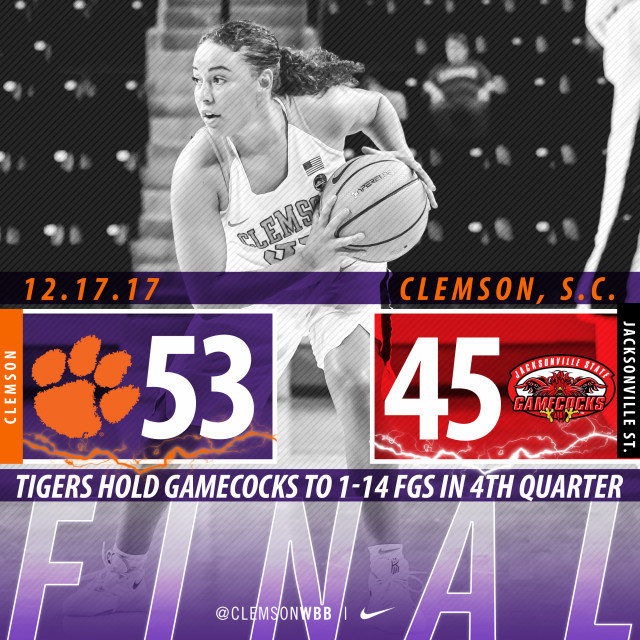 CLEMSON, S.C. – Ten of the 12 Tigers who played in the game scored, led by senior Alexis Carter with 12 points, and defense was once again a major factor as the Clemson women’s basketball team defeated Jacksonville State 53-45 on Sunday afternoon at Littlejohn Coliseum. The win puts the Tigers at 9-2 on the season, while the Gamecocks drop to 6-4.

The Tigers shot 57.7% (15-for-26) from field goal range in the first half to build up a 10-point lead at halftime, heading into the locker room with a 35-25 lead. Junior Sirah Diarra led the way with seven points and three rebounds in the first half.

Jacksonville State cut the deficit to four points, 47-43, after making 7-of-11 field goals in the third quarter. The Clemson defense stepped up dramatically in the fourth quarter, holding the Gamecocks to just 1-for-14 from the floor.

Carter led the Tigers with 12 points in the game, on 3-for-5 from field goal range and 6-for-7 from the free throw line, while also adding three assists. Junior Aliyah Collier finished with nine points and Diarra and redshirt junior Francesca Tagliapietra had seven apiece. Freshman Tylar Bennett picked up four blocked shots, adding to her impressive season total, now 25.

Entering today’s game, Clemson ranked first in the Atlantic Coast Conference and fourth in the nation in scoring defense (50.2) and field goal percentage defense (31.4%), and the Tigers continued that success against the Gamecocks, holding them to 45 points and 31.6% from field goal range.

Clemson now heads to Miami, Fla. for two games in the FIU Holiday Tournament. The Tigers face Central Arkansas on Wednesday, Dec. 20 at 2 p.m., and will meet either FIU or North Dakota State on Thursday, Dec. 21.