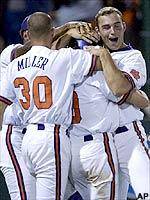 The game set a CWS record for pitchers used by both teams with 13 in a game that lasted four hours and one minute.Clemson advances to play Georgia Tech on Sunday at 5:30 PM EDT. The game will be televised by espn2.

Clemson starter Steve Reba was erratic early, giving up a leadoff single and two walks to load the bases before taking the count to 3-2 against Jeff Blevins in the first inning. Blevins flied out deep to right field, allowing one run to score. The Huskers loaded the bases again with two outs, but Reba struck out Will Bolt on a 3-2 count to escape the inning without any further damage.

Reba walked and hit two batters in the second inning before giving up an RBI-double to Daniel Bruce that left runners at second and third with one out and knocked the pitcher out of the game. Thomas Boozer entered the game for the Tigers and induced a groundout, although one run scored to give Nebraska a 3-0 lead. Brandon Eymann singled to right field in the third inning to plate Drew Anderson and extend the Cornhusker lead to 4-0.

Clemson finally got on the board in the bottom of the frame. David Slevin’s leadoff walk was followed by Zane Green’s double down the right field line. Khalil Greene then brought the runners home with his 400th career hit, a double that tied him with Kurt Bultmann for the Clemson single season record. The RBIs gave him 273 for his career, tying him for the ACC record with former Florida State player Jeremy Morris. The Tigers loaded the bases with two outs later in the inning, but Kyle Frank struck out to end the threat.

Nebraska earned the two runs back immediately with Jed Morris’ two-run homer. Reliever Patrick Hogan entered the game but surrendered two straight doubles, giving the Cornuskers a 7-2 lead with no outs in the fourth. Hogan got out of the inning and the Tigers cut the lead to 7-3 on Michael Johnson’s RBI-double in the fifth. Clemson then made it a one-run game in the sixth inning when Green hit a three-run homer to right field.

The home run was the the fifth of his career, with all five coming in this year’s NCAA Tournament.

With one out and one on in the seventh inning, Joe Simokatis hit a short pop up that landed just short of a diving Hogan. Head Coach Kyle Frank rifled a throw to the plate that punched out Simokatis.

Clemson took its first lead of the game in the bottom of the seventh. After an RBI-single by David Slevin’s brought the Tigers to within 8-7, the offense put runners on the corners with two outs for Khalil Greene. Nebraska brought in pitcher Steve Hale to face the national player of the year, but Greene sent the second pitch he saw over the fence in left for a three-run homer, a new ACC career RBI record and a 10-8 Tiger lead.

Nebraska tied it when Bolt hit a liner to center that Frank dove for but missed. The triple scored two runs to knot the game at 10, setting up Baker’s ninth-inning heroics.

Zane Green’s went 3-5 with a home run and three RBIs.