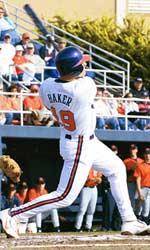 Jeff Baker was named one of five Louisville Slugger National Players-of-the-Week by Collegiate Baseball Monday after hitting five homers in five games last week. The Woodbridge, VA native went 8-for-18 with nine RBIs, as he was the only batter cited by Collegiate Baseball. Three of his five homers came against Winthrop on April 3, including the game-winning walk-off homer in the ninth inning. Baker is hitting .315 with 12 homers and 42 RBIs in 29 games this season.